Higher Productivity (and a happier crew, too!)

Higher Productivity (and a happier crew, too!)

A single event can spark a continuous effort to make production more efficient.

Last year, Renee Held stopped by the Truss Craft Structural Components of Nebraska manufacturing facility (a division of Mead Lumber) and asked whether they were interested in holding a kaizen event. Held is a lean enterprise consultant with the Nebraska Business Development Center at the University of Nebraska Omaha. She is a 25-year business management veteran and thought Truss Craft might benefit from exploring some lean manufacturing techniques.

“At the time, we’d only been in operation for three years,” remembers Lewis Schelkopf, plant manager. “I told her we were interested, but couldn’t fit it in.” Shortly thereafter, Mead hired Jeff Taake as a VP of Manufacturing & Commercial Sales, Regional Manager, and Taake suggested Schelkopf take Held up on her offer. “Four years in, we seemed to hit a production plateau, and we agreed we needed to try something different,” said Schelkopf.

At a BCMC educational session, Schelkopf, Held and her associate Martin Kostecki shared how they went about conducting a kaizen event at Truss Craft and what they learned in the process. It started with three days of initial meetings.

“Up to that point, we’d been running two shifts every day, but the production crews only interacted for about 12 minutes every day,” said Schelkopf. “What started as a healthy competition between the shifts had started generating some animosity. They were starting to blame each other for things they thought the other shift was doing wrong. It turned out that it was mostly misunderstandings because they didn’t get a chance to talk.”

Over those three days, the crews from both shifts had plenty of opportunity to talk through every aspect of the design and production process. Collectively, they focused on what Held called their “non-value work,” the activities employees engaged in that customers don’t pay for, such as overproduction, too much movement of inventory, and underutilized people. “It was all about learning to look at what they were doing and seeing the waste,” said Held.

After those initial three days, Held and Kostecki set up cameras throughout the facility. For example, one camera recorded one truss line for a day. Afterward, the workers on that line joined management to watch the video. What quickly became apparent was when the truss stackers fell behind, one or more of the production crew members would leave their station to help the stackers catch up. That would leave one or more members of the production crew standing around waiting to move the truss off the table and start laying out the next truss.

After talking through the whole process, the company made a simple change. “We trained a few employees to become floaters,” said Schelkopf. “They would work on the production line, but could easily switch to material handling and stacking if it was becoming a bottleneck and then could switch right back. Meanwhile, everyone on the production line could continue working, and no one had to stop and wait.”

It takes a significant commitment on the front end, but dramatic results can come quickly. “The approach is about continual improvement. We had those initial meetings a little over six weeks ago, and we’ve already made a number of improvements that have made a big impact on our production efficiency,” said Schelkopf. “We continue to have regular meetings between the shifts, identify more goals and come up with solutions to reach those goals.”

One unanticipated benefit of the process has been that the two shifts have become a more cohesive team. “We didn’t aim for that, but it’s been a great development. They all feel like they’re in it together.”

About the Author: Sean Shields has been managing editor of SBC Magazine since 2010 and is also director of communications for SBCA. He has focused on helping CMs grow market share since joining SBCA in 2004. 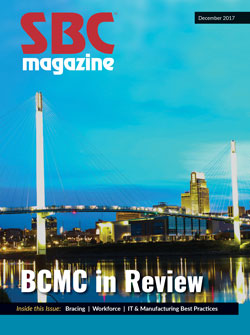 Truss Bracing: Which Would You Rather Install?
Why Build with Wall Panels?
BCMC: Fun & Games
A Glimpse of Opportunity
BCMC 2017: Education Highlights
Higher Productivity (and a happier crew, too!)
Who’s Handling Your Technology in an Increasingly Information-driven Industry?

Giving Back, One House at a Time
“Why Don’t You…”
Faces of the Industry: 2017 SBCA Award Winners
Parting Shots