How to Win Over a Framer

How to Win Over a Framer

“The more you can do for a framer to help them get the job done faster and make more money, the more they will want to work specifically with you,” says Sean Kelly, general manager of Automated Products in Marshfield, Wisconsin. “Who do you think they’re going to recommend to the general contractor when it comes to choosing between bids?”

One way Sean suggests component manufacturers (CMs) can build a strong collaborative relationship with framers is through component sequencing on the delivery trailer. “Before we build the job, I talk with the framer to find out their plan for setting the components,” he says. “Where are they going to start and what direction are they going to go in. Then I try my best to build and bundle the trusses in that order.”

For instance, Sean says girders and gable ends, the trusses framers typically need to install first, shouldn’t be buried at the bottom of the pile. While he still needs to maximize the material he puts on the trailer, he will “put those items as close to the top as I can manage and then put the small stuff on top of it.” The whole point is to minimize the extent to which framers need to unstack and/or unbundle a truss delivery to get to the truss they need next.

One of the framers Sean works with regularly is Chris Tatge, owner of Dynamic Construction and executive director of the National Framers Council. Chris clarifies that he doesn’t expect the trusses or wall panels to be perfectly in order: “Sean and I talk and we negotiate. We both talk about our limitations and expectations and we figure out an order that works the best for both of us.” Chris adds, “I try not to work with the CMs who are completely unwilling to do it.”

“Sequencing is becoming more prevalent in our market due to the fact framers are having a tough time finding labor so they’re having to do more with less guys,” says Sean. “It’s very likely sequencing is going to become the way our industry does business, whether we want it to happen or not.” The lack of space on many jobsites today is also requiring framers to install right off the back of the trailer, making sequencing all that much more beneficial.

He contends it isn’t as difficult to do as some CMs might think. “Today’s saws can cut chords and webs in any order we want them to, and with automated jig setups the guys will build whatever is in front of them. So building the trusses in a specific order isn’t a monumental task,” he explains. “Then we just bundle the trusses in batches so they’re easier to handle in the field.”

If you’re still dubious, know that Sean doesn’t sequence for free. He says, “We charge for sequencing, but that’s something the framer is willing to pay for because it means they can get jobs done faster. Everybody wins.” 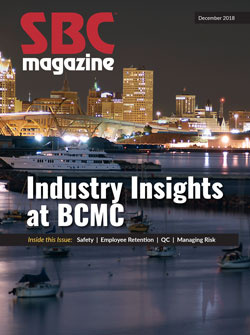 Editor's Message: A Chance to Transform Your Business
President's Message: A Sounding Board for the Buzz
Faces of the Industry: Tony Acampa
Parting Shots: If I Had a Hammer...
CM Perspective: Get a Fresh Perspective!