Inside the Box Building

Inside the Box Building

Will Calmes walked through the building at 333 East A Street in Casper and knew—de spite the dirt, mold and pigeon infestation—it wasn’t a project to pass up. “I’ve done a lot of remodel work,” said Calmes, Truss Craft Structural Components’ regional rep for Casper, central and southwest Wyoming, and this was “a unique and interesting challenge.”

Originally constructed as offices, then repurposed as mixed-use commercial and housing space, the building was condemned in 2013. Calmes was inspecting it, along with Oakwood Construction project manager Brett Jackson, to plan the thorough gutting and rebuild that would give the brick frame new life as affordable housing.

“Oakwood normally just builds new apartment complexes,” Jackson noted, but he accepted this job because Oakwood had an established relationship with BlueLine Development, the company handling the project on behalf of the Casper Housing Authority. “There’s a notable shortage of affordable living space,” said Jackson, adding that “the City of Casper was really motivated to get this building remodeled and refurbished.”

Similarly, the operations manager of the Truss Craft plant was eager to get involved despite the unusual nature of the work. “This is abnormal for us,” explained Ken Veltkamp, but it was a project with great potential. Oakwood was becoming a good customer, asking for more quotes with each successful project. “They’ll be building more apartments here in Cheyenne and another building in Wheatland,” said Veltkamp. Plus another apartment complex in Casper.

Veltkamp saw the apartment building remodel as way to impress a good partner. Calmes noted that it was also representative of the type of jobs becoming more common in the area. An old convent had become high-end apartments. A disused high school that was on the historic register had been repurposed as a U.S. Department of Veterans Affairs service center. “I’m sure there are other buildings in Casper that could be redone,” said Calmes, so getting into the renovation business was a good way to prepare for future projects.

There was also the appeal of a challenge. “From my perspective,” Calmes explained, “it was really interesting just because it required more involvement on my part than new construction.” That involvement began right away with the design.

“There were quite a few requested designs from the structural engineer on the front end of this project,” recalled Calmes. In fact, he said, one of the hold-ups in the early stages of the project was getting all the necessary structural drawings—or, more specifically, getting the measurements for those drawings. Because the new framing needed to fit inside the existing brick, and because all of the existing structural steel beams were going to be reused, careful measurements needed to be taken of the existing structure. That job fell to Calmes and Jackson.

“Brett and I had to go through the building, and the existing floors in it were so bad,” said Calmes. “I mean, we walked on them, but not with a great deal of confidence.” What they found was simple and challenging at the same time.

“Everything was built on a 20-by-20 grid,” consisting of brick columns and steel I-beams, Calmes said. The floor joists on the second and third levels as well as the roof rafters of the building were 2x10 lumber joists with 20-foot spans. The complication, explained Calmes, was that “unlike new construction, where everything is precise, this was not. So I had to come up with a system of trusses that allowed for a minimum number of design considerations and maximum efficiency” in terms of installation.

In this case, an efficient design meant lots of back and forth with the structural engineer, who hadn’t fully considered how much of a challenge his plans would be to install. “Initially, they wanted a mid-bearing block gusseted to the end of a floor truss to set inside the flanges and butt into the web of the steel I-beams,” explained Calmes. His recommendation: pack the I-beams with dimensional lumber and hang the trusses from the web packing. It was a better way to hang the trusses, and it made it easier to create a level floor.

Calmes’ experience in structural remodeling was also valuable in saving time, money and labor on the roof system. “They initially wanted to change the direction of the roof slope, which would have been a nightmare, instead of staying with the original beam layout.” Fortunately, the engineer was happy to take Calmes’ suggestions. “They were very cooperative as soon as I came up with a roof truss system that was engineered and would utilize the columns that were already in place,” said Calmes.

With the design strategy approved, Calmes could begin taking very careful measurements, assessing the bays between columns from I-beam flange to I-beam flange. Then he took off just under an inch to make sure installation went smoothly.

Veltkamp liked the idea but was a little nervous about the strategy. “The steel I-beams were not entirely square, so they had to design at least an inch of slop in so they would fit,” he explained. Giving each truss a little bit of extra space would simplify both production and installation, because it meant Truss Craft could create identical trusses instead of sizing them precisely to fit each span. It would only work, though, if the measurements were correct.

“We did not have to rebuild any trusses,” Veltkamp reported. He explained that Calmes “was the one who actually pulled the tape measure and took responsibility to make sure the spans work. They all fit,” he added happily, “so there you go.”

Calmes, too, was satisfied with the results of his efforts. “This worked really well,” he said. “The trusses dropped right in. Not too tight, not too loose.” The same strategy worked for the identical truss designs that created the roof and floor of the top level of the building, where the need to preserve the original skeletal structure of the building meant new trusses met at an old beam. The structural engineer had designed the trusses to overlap on a beam, but Calmes once again offered an alternative with wiggle room: abutting trusses that could all be the same length and that would be easy to install and sheathe.

Extra attention to truss installation issues at the design stage was good, because there were still plenty of concerns for Jackson to address as the trusses were going up. “I’ve done a lot of remodeling of old buildings,” Jackson said, “but never anything as structural as this.” In this project, new steel needed to be hung and all the structural elements that were being saved needed to be reinforced.

“They required Brett to frame up load bearing walls in the interior of all the brick walls,” Calmes explained. Today, the brick is “more decorative than anything else,” he said, and getting to that point wasn’t easy. “They’re just three-brick-deep walls, with no structural integrity,” said Calmes. Trying to keep them in place—while setting and bracing trusses and while the winter winds were doing their best to blow everything down—was no easy task.

There were difficulties at every step. “They replaced the interior framing by deconstructing the lower level and then working their way up,” explained Veltkamp. “We had to measure and build and ship as they went up.” Calmes and Jackson agree that the process was tricky. “Normally I would take all the trusses at once but this one we could take half a floor at a time,” Calmes said. “We had to land them in such a manner that we could use them quickly,” Jackson added. “We were in downtown Casper, so we used the sidewalk around the building” for staging bundles ready for installation.

Even with the truss system going in well, there were complications. For example, even though the brick exterior was being preserved, the windows needed to be changed. “It was a huge challenge because the exterior walls of this building got hacked up by different companies coming in,” explained Calmes. “On one side of the building they had all these hideous storefronts, so that had to be bricked back in.”

Fortunately, the materials for this part of the project were readily available. “The new windows were built to match the existing windows,” said Jackson. “We used some of the old bricks that we took to fill in existing spots so it still looks like it originally did.”

Both Calmes and Jackson report that the job went well, and that they’d be willing to take on a similar project in the future, despite the difficulties of this one. For one thing, they’re proud of the building they’ve restored and the affordable housing it will create. “This one’s right smack downtown,” said Jackson, “so it’ll be a big help” in terms of serving those in need of more housing options.

“It’s sure a far cry from what it was when we started out,” Calmes agreed. The city, and the new residents, have a very nice building, he added, and it’s one that preserves a piece of city history as well. Still, neither he nor Jackson would mind working on a relatively easy, new construction project next. “I would probably do it again,” Jackson concluded, “but a break would be nice.”

about the author: Before joining the SBC Magazine team in 2015, Dale Erlandson wrote for a variety of publications in several different careers, including non-profit communications, teaching and technical writing. 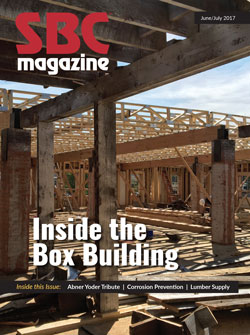 Does Everyone Know How You Make a Truss?
Know What you Know (& Admit What You Don’t)
Faces of the Industry: Jared Dix
Parting Shots