This Isn’t Your Father’s Truss Bridge

This Isn’t Your Father’s Truss Bridge 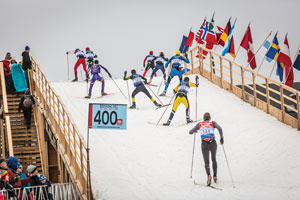 It’s not every day you’re asked to design a structure that will become an iconic part of an international event. But when the American Birkebeiner Ski Foundation came to Trussworks in Hayward, Wisconsin, that’s exactly what they requested.

How’s this for the design project’s loading conditions? A minimum of one foot of snow dead load, a five-ton live load, and accommodation for roughly 13,000 individuals moving over it. It also needs to span 30 feet in two sections, needs to be 16 feet high and 24 feet wide, and it must accommodate ramps at either end, as well as pedestrian stair access. To top it off, it has to be mobile and capable of being constructed and deconstructed in only a few hours.

“It certainly was a one-of-a-kind request,” says Mike Walters, the lead designer on the project. “The Birkebeiner is a big deal here in Hayward, so we understood well the challenge they wanted us to help them overcome.” Trussworks owner Jeff Miles fully supported the project and Mike worked with fellow designer Scott Kruzan on turning initial drawings by local architect Terry Penman into reality.

The American Birkebeiner is a nearly 35-mile cross-country ski race that started in the U.S. in 1973 and annually brings over 13,000 skiers and 20,000 additional spectators to the small town of Hayward (population: 2317), where Trussworks is based. “Every place to stay within a hundred miles is booked, and a lot of people rent out their houses for the weekend. It’s pretty crazy.”

The race starts in nearby Cable, and ends with racers speeding down a snow-covered main street in downtown Hayward. “Before they get to town, the racers have to ski across Lake Hayward and then have to cross Highway 63, the major road in and out of Hayward, to reach the finish line,” says Mike. Since race organizers have to lay down a foot of snow along the route the night before the race, closing down the highway creates a logistical nightmare. Hence, the need for the bridge.

A Design Without Precedent

“We originally designed the bridge to span 30 feet to go over two lanes of traffic and then added a second 30 foot span with a 10 foot median the next year,” says Mike. “We also had to design essentially three truss configurations that made up the ramps racers used to get up and over the bridge. We also had to incorporate into the design a way to span over a permanent water fountain on the ramp leading up onto the bridge. We ran a 2/12 pitch for the ramp they have to climb, which takes about 100 feet to get up to the 16-foot height.” Overall, the bridge is 198 feet long and weighs close to 50,000 pounds.

“The biggest challenge from a design perspective was accommodating the five-ton (10,000-pound) snow groomer they have to drive over the bridge once they’ve loaded it with snow a foot thick (around 15 pounds per square foot)," explains Mike. "Fortunately, the groomer runs on large, 12-inch-wide tracks. This spreads the load out so we could arrive at the pounds per square foot load we needed to accommodate. Once we determined the load we needed to resist, we added a few factors of safety to accommodate things like the groomer stopping and sitting on the bridge.” Once it was designed, they ran additional loading conditions (large numbers of people standing on the bridge, for example) to make sure all their bases were covered.

Each 30-foot span is constructed of 5-1/2-inch by 24-inch glulam beams spaced eight feet apart. Three sections are used to give the bridge its 24-foot width. The spans have a 3-1/8-inch treated glulam deck.

The ramps were made of trusses spaced two feet on center and had 1-1/8 inch floor sheathing for decking. Trussworks also developed and tested the 64 railing sections used along the length of both sides of the bridge. In total, the bridge requires 15,500 screws to fasten it all together.

Mike points out, “another interesting challenge was coming up with a design that could be quickly assembled and then disassembled.” They broke the design into 24 unique items that needed to be assembled on site. This typically requires 17 flatbed semi-trucks to haul around. Once all the parts are in place, it takes a crew of ten approximately nine hours to set it up and another six hours to break it down. (Watch a time-lapse video of the bridge going up.)

Ultimately, the bridge has been a huge success for Trussworks and the American Birkebeiner Ski Foundation. So much so that Mike got a call that few truss designers would ever dream of getting. “In June 2017, organizers for the Super Bowl called me and wanted to set the bridge up in downtown Minneapolis.” The city was ready to show off its brand new U.S. Bank Stadium and wanted to surround it with as much spectacle as they could.

During the ten day festival leading up to Super Bowl LII, the bridge served as one of the key attractions. It took twelve dump trucks of snow to cover the bridge in a foot of snow (they only used one of the 30-foot spans). It hosted cross-country skiing, skijoring and fat tire bike racing, along with a highly publicized sled race between NASCAR racers Dale Earnhardt Jr., Martin Truex Jr., and Ryan Blaney. It even served as the home of NBC’s broadcasting studio during the week of the Super Bowl.

Dubbed the “American Birkebeiner International Bridge,” the structure Mike and his team designed has proven to be the perfect solution to the challenge race organizers originally brought to Trussworks. Traffic is no longer blocked on Highway 63 leading up to the race, the bridge can be set up and torn down within a day, and probably most importantly, it has become a defining part of the race for participants. “The last thing you want as a skier at the end of a 35-mile race is to have to deal with a tough hill. Fortunately, we were able to find a ramp pitch that fit the space we had to work with that didn’t create an insurmountable obstacle for racers,” says Mike. It also gives racers a great view of their end goal: the finish line. 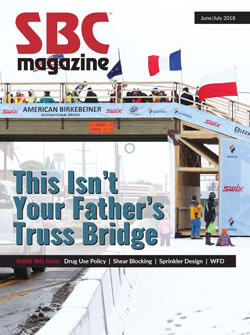