Making a Case for Continuous Change

Making a Case for Continuous Change

It takes good communication to keep an ongoing upgrade process on track.

Chris Cozart, director of manufacturing systems for Builders FirstSource in Denver, Colorado, believes everyone’s input is needed to build employee buy-in throughout the company and to successfully implement change.

“Technology is going to be the way to increase efficiencies,” Chris Cozart predicts. “A hammer isn’t going to get any faster.”

Realizing the efficiencies technology can provide—and the productivity increases and bottom-line benefits that follow—depends on the constant evolution of technology. Staying on top of software upgrades and advancements in hardware has several advantages, not the least of which is allowing employees to work efficiently: they’re not waiting for bug fixes or badly-needed upgrades. They might even grumble less at altered processes when the changes are incremental.

As director of manufacturing systems, Cozart spends a lot of time thinking about ways to make this vision a reality at the many Builders FirstSource locations. For him, high-tech success comes down to putting sufficient time and effort into a critical, low-tech process: communication.

“IT people have a tendency to lose focus of who their customers are,” Cozart said. The users—the consumers of the hardware and software the IT department deploys—have insight that’s vital to successful change. “If you just have that communication,” Cozart explained, “you will be able to understand what’s working and what’s not working.”

Cozart says positive change starts with creating the right team, a task in which IT managers play a critical role. “Those stuck in the middle (but in a good way!),” he said, are perfectly positioned to hear from both executives and end users, and to bring IT staff “the wisdom of both.” A good leader assembles a team that can productively work together to carry out a number of crucial tasks:

The near future, Cozart anticipates, will see the component manufacturing industry working to “minimize mouse clicks, minimize foot traffic, go paperless, and use technology out on the shop floor.” All of those initiatives will depend on “educating the folks that are already there,” Cozart said, and making sure they have a positive mindset when it comes to changes in the technology they’re using.

The key to fostering that attitude, Cozart said, is communication. “Make sure they understand why you’re changing,” and make sure “they” includes everyone—executives, managers, IT staff and end users. That might mean explaining the benefits of standardization—Cozart emphasizes that routine upgrades to keep users on a single version of software can improve the IT department’s ability to support users and provide documentation and training. It might mean reminding users that coordinated updates can improve system compatibility, making global collaboration easier. 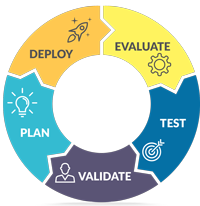 “What I see the IT people pursuing is trying to stay on [the most] updated version. A lot of times, it’s not as necessary as the software vendor or the IT people think it is.”

Don’t leave anyone out.

“What are the leaders of our company asking of users? Are users doing something different— something managers don’t know about—that’s working better?”

“Once we got it deployed, it didn’t really do anything that we needed it to do. It was just a new version.”

Don’t do what you can, do what’s right.

“If it doesn’t do what the users need it to do, it doesn’t matter how fast it is.”

Whatever it takes, Cozart said, “make sure everyone stays involved with the process and understands what we’re doing and why we’re doing it.” There will be challenges. “The first one is difficult,” Cozart admitted. The first upgrade cycle, the first improvement project, the first meeting of your change management group—all of them have their potential pitfalls. However, a rocky start isn’t the end. “It becomes a rinse-and-repeat,” Cozart said, “you set a kind of cadence.” That cadence gives users consistent and realistic expectations, minimizes the effort needed for each upgrade process, and gives users the sense of ownership that makes them your company’s best champions of change. 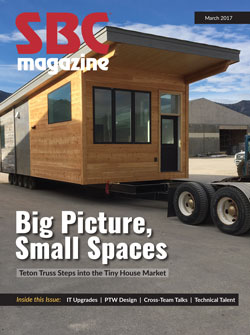 Making a Case for Continuous Change
A Designer’s Guide to PTW
Seeing the Big Picture in Small Spaces
Building Buy-in
Looking for Technical Talent? Go back to your alma mater.
Building a Shed Lays a Foundation for the Future

Overwhelming Opportunity
The Right Tools in the Toolbox
Faces of the Industry: Keith Walden
Parting Shots