Rebuilding a historic church after a ruinous fire was a project not to be forgotten.

Some projects stick with you, observed truss designer Nic Kremer. “You remember what you did,” he explained, and the creativity that you exercise on one particularly challenging project spills over into every job afterward. The last trusses for the First United Methodist church in Burlington, Iowa were installed nearly six years ago, yet the project is still fresh in the minds of Kremer, his colleagues at Cascade Mfg Co, and the builder and engineer who collaborated on the project.“The church went through a horrific fire,” recalled Matthew Karns of Ball Team LLC, the builder on the church restoration project. “The fire wiped out most of the existing building,” he said, leaving “the foundation and a majority of the exterior walls still intact.” After bracing the walls and evaluating the damage, the church decided to preserve the exterior shell and reuse it in a renovation instead of rebuilding from scratch.

Accommodating the existing walls was the biggest complication of the project, Ted Hoeger of Tometich Engineering said, but it was “also a gold star honor” to keep the walls and return the church to what it had been. “The building was getting historic tax credits from the state,” said Hoeger, “so the architect did a lot of work with finding photos and historic newspapers” to guide the redesign. Tometich often works on historic restorations in aging downtowns, Hoeger noted, so the research process wasn’t new to him. What he worried about instead was the masonry he had to work with.

“One of the biggest things we had to find out was: What’s the brick capacity?” Hoeger explained. The Tometich engineers had been planning a new test method to answer exactly that question, and the damaged church walls presented a perfect chance to try it out. “We designed a destructive pull test,” said Hoeger, to measure mortar strength. Hoeger’s team would set an anchor in the wall and quantify the force required to pull the anchor out. The information they gathered was critical, because Hoeger was engineering new lintels and floor joist ledgers for the entire building, working with and around existing beam pockets and the occasional piece of masonry that needed to be replaced.

With Hoeger taking care of the walls, Kremer didn’t have to worry about them when it came to truss design. “They had to do some modifications to walls to strengthen them up,” Kremer recalled, but “on my end, it wasn’t a concern.” What was a concern was not how strong the walls were, but exactly where they were.

“Usually, we’re working on a new project,” Kremer explained, “whereas this was an existing building.” Designing a roof to sit on or within existing, imperfect walls, is much more challenging than designing for a hypothetical, perfectly square structure. Kremer noted that the original church “was built many, many years ago, so the walls were not true straight lines. They were angled – so that was a challenging part.”

Karns agreed. “One of the most difficult aspects of the project (specifically in regards to the truss system) was working with the existing exterior walls,” he said. “The walls had many varying widths of masonry going around the building, with varying thicknesses.” In addition, there were “varying elevations of the existing walls left after the fire;” the walls weren’t square; and his crew was “working 50 feet above the basement to get the required measurements.” Establishing bench points and accurately laying out the roof trusses was a very difficult task – and that was true even without considering that this building was a church, with a very distinctive profile, many decorative spires and a very complex roof line.

Starting his design, Kremer said he “found many discrepancies.” Whenever he ran across “dimensions not quite working out,” it set off a new round of re-measurement. “They had to set up a laser out in the field, on the jobsite, to give me dimensions,” he remembered. “They gave me points”– locations of the building’s corners – “and I had to put those points into my system to create the walls around the building. Once I got that, I knew the outline of it, and then we had many phone calls and emails, back and forth, trying to get our roof pitches to work out.”

Karns agrees that “it was a difficult process, getting accurate field measurements for the roof trusses, and it took considerable coordination from the team so that the trusses could be produced and installed.” Before installation or production could begin, though, there was a lot of design work.

“Being a church, they wanted cathedral ceilings,” said Kremer. Designing the interior vaults as well as the exterior pitch took “a lot of trial and error.” While the other, typically new-construction projects Kremer works on provide architectural and structural drawings for him to work from, this project was a rebuild, which meant he had to rely on different resources. “They provided me with existing pictures of how it looked originally so I went off of that.”

Hoeger says the results were impressive. “One of the things that really stood out to me was that in that entire roof system, there were about six trusses that were the same. Almost every truss was different,” he said. “Cascade made it so easy,” he recalled. “They provided all those individual trusses in the roof,” he said, and they “did a really good job of providing floor trusses on the interior for a cantilever balcony.” That feature, Hoeger noted, was not only a challenge to design, it was also very critical to get right. As he explained, it’s what really inspires a sense of awe when you step inside the church.

This project, said Hoeger, “was so complicated. It was hard for everyone to understand.” It was remarkable, he said, that Cascade was able to make it “extremely easy for me – they made me individual trusses and made framing simple for everyone in the field. We didn’t have to frame ridges and valleys and pick up beam loads” because the trusses were designed to full span lengths and complete support for the roof and floors without additional structural elements.

That simplicity was much appreciated during installation. “There were actually minimal issues when the trusses arrived on site,” remembered Karns. “So everyone’s effort on the front end definitely paid off.” The time and effort put into planning “made the installation go as smoothly as possible,” he said, allowing him to focus on the bigger picture. “Personally, it was very fulfilling being a part of a team that was able to breathe back life in to such a valuable piece of the community. Every time I visited the site, members of the community would be watching the progress and asking questions about the project.” There was, he said, “so much excitement to see the building come together after such a tragic event.”

There were minor issues, recalled Kremer, “where a measurement might have been a little bit out of line” and the framing crew “might have to cut the truss a little shorter or make adjustments to make the truss work,” but a handful of phone calls cleared everything up. “All in all, I would say the installation, as I remember, went well.”

With the extensive fire damage, noted Hoeger, “the entire building was completely gutted.” That meant there were no worries about finding structurally unsound wooden leftovers as the new framing was installed. The only installation concern he could recall was ensuring that enough lateral bracing was in place as the trusses went into place.

“I’ve done other churches – new churches, additions,” said Kremer, but he knew from the beginning that this would be a project to remember. Hoeger said he recognized right away that “if we got done, we were all going to be very proud of it in the end.” Churches, he explained, stick around for a long time. “This church was built in 1899,” he said, and “it will hopefully stand for another 100 years.” As soon as he heard about the project, he recalls, “I knew this was going to be a project of my career.” Karns, too, says he won’t be forgetting this project any time soon. “I have not had a project that has even closely resembled this project,” he said, “and I am not sure that I ever will again.”

About the Author: Dale Erlandson focuses on the individuals who make up the component manufacturing industry and how they are leaving their mark in their communities. 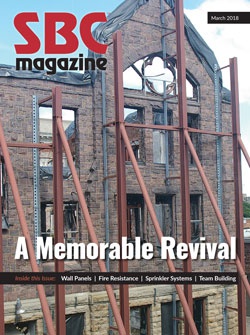