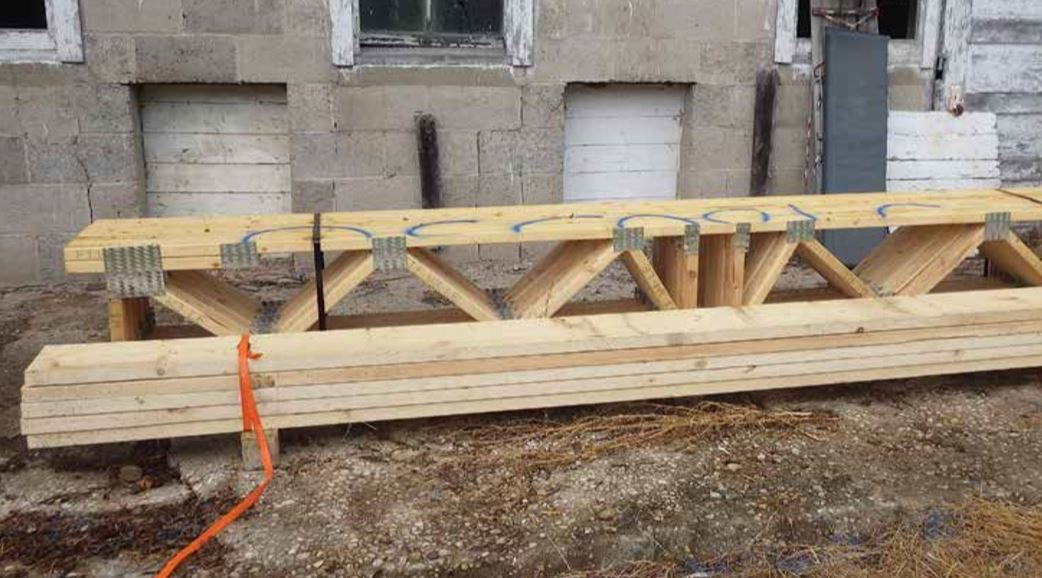 Truss weathering has long been a topic where more robust data on weathered truss performance has been needed. Over the past eight months, we have published a series of articles on how, what, and why truss testing was performed. Now that all the trusses have been shipped back to SBCRI’s laboratory in Madison, Wisconsin, and the trusses have been tested, it’s time to share the preliminary results that will form the basis for a new set of best practices supported by testing using science-based principles. This new set of concepts will then be integrated into BCSI and become part of a new set of scope of work specifications.

Weathered truss performance has been a grey area for component manufacturers for quite some time. How long can trusses sit outside? How should trusses be stored? It can be reasonably assumed that trusses stored in the most humid and hottest weather would be the most susceptible to plate movement. This was the initial thought when talking with component manufacturers (CMs) about testing but a deeper dive into the facts was needed. In order to correctly frame the problem and determine the desired outcomes, a test plan needed to be created.

To get answers to these questions and to better determine what we wanted the test to produce as benchmarks for evaluation, SBCA committees and staff worked together to come up with the final test plan. The test plan involved three locations for storage: Maryland, Mississippi, and Wisconsin.

Having multiple locations allowed for more trusses to be exposed to different types of weather. This made it possible for us to determine if location specific weather would affect trusses differently. Having different locations also allowed for different types of wood to be used that are more specific to the region. For this reason, the Wisconsin location had both SPF and SYP trusses, while the other two locations only had SYP trusses. “I thought manufacturers on the coasts would have bigger issues due to the warm and humid climate, so it is interesting to see that trusses responded similarly throughout the country,” says Bob Mochinski, VP of operations at Littfin Truss in Winsted, Minnesota. Trusses were also stored in a variety of ways to replicate storage techniques typically seen in the real world.

Once the weathering of trusses was complete and trusses were shipped back to SBCRI in Madison, SBCA staff was able to proceed with the testing plan to measure the most vital pieces of information with regard to truss performance.

The first variable that was measured was plate embedment relative to the control trusses. This was done to determine the amount the plates moved from expected initial embedment state, which was represented by control trusses. What SBCA found is that within 16 weeks, weather’s effect on plate embedment is negligible with only seven of 800 plates measured showing greater than a 2/32" movement (red line in Chart 1 on page 32). 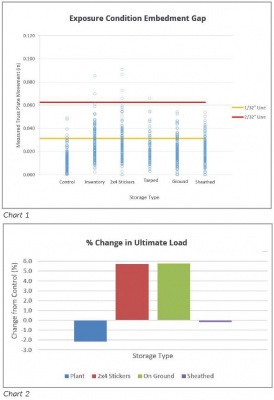 The second variable that was measured was the ultimate capacity of the trusses. This was done by testing all trusses to failure and comparing the ultimate capacity values of the weathered trusses to the values of the control trusses. The important part of this test procedure was repressing plates that had moved due to weather. The criteria for repressing plates was anything greater than 1/32" movement (yellow line in Chart 1).

This exercise explored the effectiveness of repressing plates in the yard or on the jobsite if plate embedment changes due to weathering. Each point in the graph above shows the average embedment measurement for a plate. These points are plotted with respect to the different storage methods, which are specified at the bottom of the graph.

What was found during testing has created value for CMs and framers alike. Additionally, testing confirms that historical re-
pressing concept as stated in ANSI/TPI 1 Section 3.8.

“I’d also like to know how weather affects high strength plates on the wide face of lumber,” says Bob, who gave SBCA staff the idea to perform additional plate tests and is working with SBCA to perform preliminary testing. This goes to show that questions from members can lead to additional research being performed if it will help round out the industry’s knowledge and improve best practices.

While these results are preliminary, the data suggests what needs to be contained in a best practices document to support short- and long-term storage of trusses. This information can also be used to better train decision-makers on what the expected performance of a truss is, even after it’s been exposed to weather. Having a new best practice will allow CMs to finally answer the question of how to treat trusses that have been exposed to the elements and how to rehabilitate trusses if they need to be.

We are currently working on one last piece of the weathering puzzle: What is the effect of heat from sun exposure on plated joint performance? Once this testing and data analysis is complete, we’ll be able to work through all elements of the SBCA best practices where our goal is to provide handling and storage counsel that provides confidence in assuring trusses will perform as expected.

About the Authors: Evan Protexter has been heavily involved in industry testing and research aimed at advancing quality control and risk management within the industry. In his free time, he focuses on technical best practices. 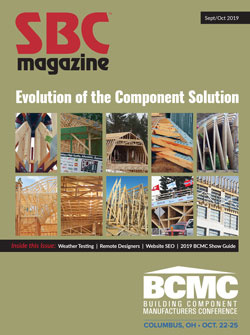 A Decade in the Evolution of Component Solutions
Preliminary Weathering Testing to Generate Best Practices
Encouraging People to Visit You Online
What’s It Like to Be a Remote Truss Designer?

Editor's Message: The Industry Is About to Expand
President's Message: Greater Participation, Greater Value for All
Faces of the Industry: John Howlin
CM Perspective: Getting Your Hands Dirty to Understand Your Costs (Part 2)
Parting Shots: One Couple’s Ticket to Paradise