Seeing the Forest for the Lumber

Seeing the Forest for the Lumber

Timber harvested from federal lands is one source of the billions of board feet of softwood lumber the U.S. produces annually. Recently, this source has been gradually increasing year by year, signaling positive news for an industry burdened with high lumber prices and market volatility. Due to shifts in policy and U.S. Forest Service management practices, harvest totals are projected to continue their upward trend. If the trend sustains long term, it could have a significant impact on the supply of lumber in the U.S., decreasing volatility.

In 2011, the U.S. Forest Service harvested 2.5 billion board feet of timber, and the numbers have been rising each year since then, says Lawson Fite, general counsel for the American Forest Resource Council. In 2017, 2.9 billion board feet were harvested, and Interim Forest Service Chief Vicki Christiansen has set a goal of 3.4 billion for 2018, increasing to 4 billion in 2020. Moving from 3.4 billion board feet to 4 billion is significant, amounting to nearly an 18 percent increase. The impact on supply “would be dramatic,” says John Branstetter, sales manager for Vaagen Brothers Lumber, Inc. If such a trend continues long term, he says, an increase in lumber mills may be on the horizon, helping to rebuild some of the lumber economy lost in the 1990s.

A bit of historical context can help put the recent trend into perspective. While federal forest lands were originally set aside in part for the harvest and sale of lumber, the 1990s began to see a significant shift away from harvest and active management. Lawson recounts that “the nineties were very difficult,” especially in terms of “dealing with endangered species issues.” This trend led to the closure of many lumber mills, which in some instances meant the fading of the small towns that depended on them for their economic base.

However, 2011 marked a turning point, Lawson says, and two important factors helped drive the change. It may come as a surprise that one was the recession. “I think that opened people’s eyes to just how valuable this [timber harvest] infrastructure is,” he says. The severity and far-reaching impact of the recession helped create a broader consensus among government and Forest Service officials about the value of the federal logging industry and the need to reverse the downward trend in harvest totals that characterized the 1990s. The second catalyst for more active management has been the recently increasing number and size of forest fires, particularly in the West. To prevent further devastation, officials are acknowledging the need to increase forest restoration efforts.

As a result, Lawson believes there is “more and more consensus on at least a certain set of things that need to be done.” More active management that gets timber volume out to the market, he says, is being driven by this dual desire to help maintain the milling infrastructure in support of American jobs and to reduce the prevalence and severity of forest fires. “We feel like things are heading in the right direction,” he says.

A number of legislative changes have helped make the recent increase possible. Recent bills have reduced and streamlined some of the environmental analysis the Forest Service must conduct before harvest. “When the Forest Service does a project that sells timber, they have to do an analysis under National Environmental Policy Act: NEPA,” says Lawson. However, he explains, Categorical Exclusions (CEs) help the Forest Service streamline this process when they are seeking to harvest timber for the purpose specified in a particular CE, such as restoration of areas that pose a fire risk, for example. An increase in CEs helps open up more federal land for easier harvest and sale into the market. There has been a recent trend to broaden these exclusions, such as in the Agricultural Act (farm bill) of 2014, which created a CE for areas up to 3,000 acres that need to be addressed for insect and disease risk.

The omnibus Consolidated Appropriations Act that passed in March 2018 included a wildfire resilience CE designed for harvest deemed necessary to curb forest fire risk. The most notable provision of the omnibus bill, however, was a wildfire funding fix that will take effect in FY2020. The fix created a dedicated pool of money that the Forest Service can draw from to finance wildfire suppression, as opposed to having to backfill their accounts every time they need to expend funds in fighting fires. According to Lawson, this “brings a lot more stability to the program accounts” in such a way that it “should help with a lot more predictability in timber production.”

In addition, there is further potential for expanded CE provisions in the 2018 farm bill currently under negotiation.

Personnel changes and Forest Service management approaches are also contributing to a higher federal timber harvest outlook. Direction given in the Forest Service’s 2015 strategic plan outlines a general goal of increasing the pace and scale of forest restoration. As mentioned, this general directive is gradually coming to fruition, seen in increasing yearly harvest numbers and Chief Christiansen’s goal of reaching 4 billion board feet by 2020.

Another manifestation of this shift in approach was Secretary of the Department of the Interior Ryan Zinke's pledge in a cabinet meeting in August 2018 to focus on salvaging timber from wildfire-affected areas and to selectively extract more salvageable dead timber for sale.

Important to note is that the timber harvest potential of federal lands is even greater than the incrementally increasing yearly totals might lead one to believe. Lawson points out that even under the Forest Service’s still somewhat conservative management plan specifications, the Forest Service’s allowable sales quantity (ASQ) of timber is about 6.8 billion board feet per year nationwide. Given that the harvest total in 2017 was 2.9 billion board feet, “that’s a huge gap,” says Lawson. Actually reaching 6.8 billion per year depends on a number of factors. However, such a number highlights the capacity of federal forests, and if harvest continues to increase at the current rate, it will be a considerable time until that capacity is reached.

The increasing harvest and the available supply waiting to be tapped is encouraging for CM businesses. While margins for components should be driven by demand and not the price of lumber (a topic for a future article), an increase in lumber supply could help improve market predictability and even contribute to price decreases that in turn reduce CM costs. CMs and lumber industry professionals can urge their elected officials to advocate policies that increase the scale and intensity of the shift toward greater harvest on federal lands. Such advocacy can be especially important for CMs whose representatives have been selected as committee members for key legislation, such as the 2018 farm bill.

Getting your elected officials into your plant for a tour can be a prime opportunity to discuss the impact of such legislation on your business.

About the Author: Kevin Kutschenreuter digs into the building code to help component manufacturers gain greater market acceptance of their innovative products. 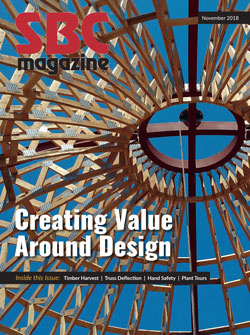 Editor's Message: What is the Value of Changed Behavior?
President's Message: It’s an Exciting Time to Be in the Industry
Faces of the Industry: Casey Carey
Parting Shots: Congratulations Team Burgundy!
CM Perspective: Innovation Comes Through Sharing Ideas
Safety Tip: Gearing Up for Winter