A teacher finds value in adding truss math to her curriculum

“I think we’re maybe missing each other a little bit,” says Stephanie Gillen, a math and science instructor at Elbert High School, a small public school located about an hour south of Denver, Colorado. As a teacher, she is concerned about ensuring her students’ success after high school. As the spouse of a salesperson for Simpson Strong-Tie, she is aware of the career opportunities available in the components industry. “Schools have this desire and I think component manufacturers have this desire, and we’re just not connecting.” 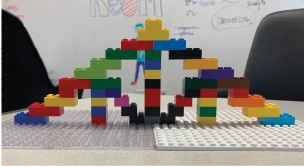 Stephanie is also familiar with the typical complaints about school we’ve all heard teenagers make: “Why do I have to learn this? When will I ever use this in real life?” You may have been one of those teenagers yourself. In her experience, Stephanie says it is typically remedial math students that ask these questions and, more often than not, these are often the same students that aren’t interested in pursuing college.

“The classes are a lot of times boring for the kids because they’re not something they can see themselves using as a professional or in a job later on,” she explains. “So I asked myself, ‘What can I do to make this more interesting and help engage these kids more?’”

Stephanie took the question home to her husband, Brian, who had a quick answer: SBCA’s Truss Technician Training (TTT Level 1) program. “TTT Level 1 has a big math component,” says Stephanie, “so we wondered if there could be a way to incorporate a real life experience and a real life certification along with their math class. That’s really what got it started.”

“I was told there was no room in the schedule for an additional course, and integrated (remedial) math was the one class I was asked to teach that had some flexibility in content,” she explains. “I didn’t want to lose the opportunity, so I decided to go for it!” 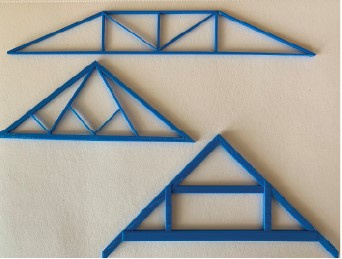 Stephanie jumped in with both feet, spending the summer of 2019 completing TTT Level 1 herself to get a deep understanding of the contents of the program and how that could translate to her students. “Some of the math was pretty challenging, especially for remedial level students,” she says, “but the recommendations it gave for background math helped me outline the first semester to prepare them to delve into the deeper trigonometry and the math more directly related to truss calculations and load development second semester.”

While she admits that they spent more time on background math than she had originally intended, Stephanie says that going back and forth between the TTT Level 1 course online and her background math curriculum kept the students interested in the industry. “We had some good discussions, went on a couple of field trips and did some hands-on projects,” she explains, “so it wasn’t just all math.”

As she introduced the class to the wide variety of truss configurations available, Stephanie says her students used LEGO® bricks to build trusses – both common, tested configurations and new designs of their own. They also had the opportunity to design trusses (with members being proportional to actual lumber) and print them on the school’s 3D printers (see photos above).

Stephanie says outings were definitely highlights of the class and gave her students greater exposure to the wood construction industry in general. On a visit to a local lumber mill focused on beetle kill pine, some students made contacts for potential summer jobs. On a trip to The Mill in Colorado Springs, a larger organization focused on several trades, the high schoolers attended a job fair where several students – even those who weren’t as excited about tech math – made some good contacts and learned a lot about opportunities in the trades. Second semester was going to include additional fields trips – two truss plant tours and a visit to Simpson Strong-Tie’s office in Boulder – but, as it did for most this spring, COVID-19 sent Stephanie and her students home for the remainder of the school year.

What did the students think? Stephanie says that the class included a mix of remedial math students and a few who were there because they were curious about the real-world applications. She says a few had some basic construction and design knowledge to begin with but everything about the truss industry was brand new, and they got excited about the concept of triangulation, how it all works together and ties into geometry and trigonometry. The two students who passed the exam report that they wouldn’t have considered a career in the industry before this class, but would now (see sidebar). While the remedial math students didn’t necessarily jive with the technical side of things, Stephanie says their eyes were opened to the industry as a whole and they showed interest in the hands-on, physical construction side of component manufacturing.

If she had it to do all over again, Stephanie says she would make “Technical Math” an elective course. “We can take it a lot further in an environment like that,” Stephanie explains. “Having more kids who are interested in it and not having to spend as much time with the background math will allow more time for hands-on projects, the fun stuff. We could take it to a whole new level.”

When asked what she would recommend to other teachers wanting to pursue a technical math class focused on the truss industry, Stephanie says she would encourage them to give it a shot. “It’s a piece of the puzzle we’re missing in schools as we are turning toward the trades again,” she says. “There are lots of options out there for good careers if we could incorporate those skills into more science and math programs at the high school level.”

Her message to component manufacturers is just as direct. “Don’t be afraid to go and talk to school districts, especially in rural areas,” she says. “Go in and have a meeting with the principal about your interests and how you want to help turn out individuals that can be used in this industry.” She explains that offering resources to help reduce costs is always welcome when it comes to getting something new off the ground: “Schools jump at the chance!”

“The subject-type of the class was very new to me; however, I grew to love what was being taught, and by the end of the year, I had a solid grasp on the content,” Jessica says of her experience. “I enjoyed the entirety of Technical Math, especially the truss math.”

“I enjoyed taking a class that was different,” says Cormac. “We still learned a lot of basic math and physics but we applied it to real life. I never knew how complex the industry is. It is fascinating how many different moving parts there are for each different task.”

“I do not necessarily have exact plans for the future,” says Jessica, who also got a summer internship with Simpson Strong-Tie. “I would love to gain some experience in the truss industry, and possibly look for a career in this field, or ones like it. The TTT Level I certification is a huge benefit for me as a young person. The knowledge I learned working for it will also greatly benefit me in multiple areas of my life.”

Cormac agrees. “This class opened my eyes to a new industry,” he says. “I do not have any solid plans for the future yet, but it is reassuring to know that I have the truss industry as an option. This gives me a potential option for a future career.” 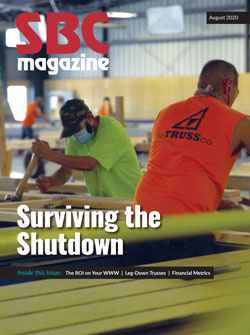