A high-quality component is the result of many individuals’ expertise – including the person standing at the saw.

Reaching that level of expertise doesn’t happen overnight, though. Cory Monnier, operations manager of ABC Truss in Chetek, Wisconsin, says it takes time for sawyers to become that good. Seldom is a sawyer hired off the street, so the grooming process starts in the plant. ABC Truss prefers to hire internally for the sawyer position because current employees are already familiar with other aspects of production.

“First, we look for key attributes like safety, teamwork, eye for quality and troubleshooting,” Cory says. “Then we want to see that they understand how to run the equipment and calibrate the saw, because taking care of your equipment is important.”

John Nelson, owner of Nelson Truss in Edgerton, Wisconsin, says another important factor in hiring or promoting someone to be a sawyer is that person’s ability to work alone.

“Anyone who is really self-motivated and works well alone is going to be a good candidate because, aside from communicating with a picker, they’re working by themselves,” John says.

One is certainly a lonely number, and it can be daunting, knowing everything falls on you. But that has an upside too: handling all the cut work builds experience and, eventually, confidence. In the component world, sometimes baptism by fire is best.

A good sawyer learns to recognize the shortcomings of the equipment and the materials that he or she works with every day, Nelson explains. Doing so shifts focus from the machine to how the end product needs to come together. Nelson says sawyers distinguish themselves by limiting mistakes like mis-cuts, missed cuts, and pulling the wrong boards.

The best ways to become better? Take note of those little things and adjust to be as efficient as possible.

For instance, blade selection is a small yet extremely vital parts of a sawyer’s job. Bigger saw blades tend to experience more or less flex based on the size and type of wood being cut. Using a wrong-sized blade can produce an inaccurate or less-clean cut, and that introduces re-work or lengths outside tolerances. Analyzing the upcoming lumber dimensions to choose the best size blade ensures re-work is minimized.

Likewise, choosing the right method of feeding the saw has implications for when the lumber reaches the point of assembly. Although no board is perfect, Cory notes there are several tactics his sawyers use when cutting lengths and angles that help overcome common lumber defects.

For example, a bowed board used as a top chord in a roof truss should be cut such that, once it arrives in assembly, the bow is on the top side of the truss. Once sheathing is installed on the jobsite, the bow tends to flatten out. In cases where lumber has several areas of wane, sawyers must use their best judgement. Wane is not a big issue if it’s on truss web members, but it can be a concern when used in a chord. Too much waning at joints affects truss plate tooth embedment, and too much waning on exterior edges causes fastening difficulties for sheathing installers or drywallers. Thinking through cases like these and adjusting a cut accordingly separates the best sawyers from the rest.

Finally, while it’s not a sawyer’s responsibility to worry about the design of the truss, per se, an experienced sawyer should be aware of the quality of the lumber and have the authority to call for a change when appropriate. For example, John says, choosing machine stress rated (MSR) over No. 2 lumber is a common call at Nelson Truss. Not only does that help the build team, it shows the client the CM cares about making the highest quality components.

Where experience is limited, CMs like ABC Truss focus on developing new sawyers over time.

“The hardest part is training. When we train a sawyer we like to have them shadow an experienced sawyer,” Cory says. The new person “may watch for a while until we feel comfortable, and eventually they switch: the trainee takes over under the watch of the trainer until he needs to step in and correct or give tips. It’s hard to have set guidelines in training because there are so many variables in all these jobs.”

And that’s why, despite technology, a sawyer is testament to the continued need for smart, experienced woodworkers in component production.

“A lot of times, sawyers don’t get the credit they deserve. They’re one of the reasons we’re successful here – it’s because we have a very good crew,” Cory says. “They’re the unsung heroes, I would say.”

About the Author: Matt Tanger works closely with framers and component manufacturers to identify truss production and installation best practices. 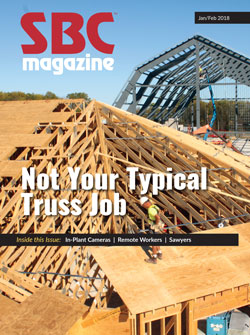 Editor's Message: An Unlikely Assist
President's Message: Talking to Your Saw Should Be Easy
Faces of the Industry: Brad Unruh
Parting Shots
CM Perspective: This Is the Year!
SBCA Update: Get in the Game