Framers and CMs can make for a powerful partnership, but it takes work.

“From a framer’s point of view, the hardest part of wall panelization is not being involved early enough in the process,” Ken Shifflett says. Ken owns Ace Carpentry in Manassas, Virginia. As a turnkey framer for over 25 years, he’s seen the positive impact wall panels have made and the communication struggles they highlight.

“What we’ve seen before is a general contractor buys all the wall panels and the component manufacturer just dumps them on-site and there’d be no interaction between the framer and component manufacturer,” Ken says. “There’s a huge disconnect there and framers are left to figure out how all these pieces are supposed to be put together.”

Ken’s point is that component manufacturers (CMs) can be more successful with wall panels if they include installers as early in the process as possible. Since installers play such a key role in determining whether a panelized job is successful, it makes sense to focus heavily on the framer’s experience with the product in the field.

The 2016 member survey from the National Association of Homebuilders indicates only 16 percent of the exterior wall framing used in residential construction consists of wall panels, leaving a lot of room for market share growth. By comparison, between 2006 and 2014 that percentage hovered right around nine percent. So wall panelization is increasing at a good pace, but it’s clear wall panels require more attention prior to and during installation as more and more framers begin to use these components and go through a “first time use” learning curve.

Sean Kelly, general manager of Automated Products, Inc. in Marshfield, Wisconsin says in the past two years they have seen an 80 percent increase in wall panel orders on the residential side of construction and expect that trend to continue. Sean says they see it as an opportunity to show installers the behind-the-scenes work.

“Guys new to wall panels, especially residential installers, want see how they’re built. So we invite them in for a tour and show them everything from our three-dimensional design process all the way to how they’re assembled,” Sean says. “When they see that it’s a big thing, they’re pretty amazed by how intricate they really are.”

Obviously not everyone is sold on wall panels. Most framing crews stick frame, prefer to continue stick framing, and are resistant to switching to component installation. Those framers are the best to target for panel education. Sean says in situations like those his company hosts lunch-and-learns for resistance framers. Those sessions focus on panel design but dig into how panels are numbered during production, how they’re loaded on a truck, and how they’re craned on site. Sean said once framers see the quality they offer (like insulating blind corners in production and offering different kinds of sheathing) and the value of quicker installation times, they start to get more comfortable.

Equally important as selling by education is establishing proper lines of communication throughout the entire process. Ken points out the most difficult part of selling your panels can be communication from sale to installation. Your sales rep has to be feet on the ground while selling as well as feet on the ground once your product hits the jobsite.

“We make sure in our meetings, early on, that we understand control lines and we understand where everyone is pulling their dimensions from in relationship to that control line,” Ken says. Control lines are the dimensions of the walls taken from the building’s framing layout plans. These are snapped (i.e., marked with a chalk line) on the slab edge of a building on the ground level or down the center of where the corridor will be located. In some cases, after each floor is added, framers will drill holes through the floor and use a laser to pinpoint exactly where the control lines should be in each new floor.

“For example, if a plumber comes in to install his plumbing stacks before all the walls are set and installed, you have to make sure he’s following the same control lines to make certain his work matches the wall panel layout and design. Every tradesman onsite is affected by it, but CMs need to be aware of the control line process being used and be in that circle of communication as well.”

Sean agrees that educating CMs and end-users on coordinating a common understanding using common definitions is as important, if not more important, than supplying the correct product. He adds that going through a detailed activity list from project start to project finish ensures everyone is of the same understanding and the wall panels are installed as they were designed to be.

“We go over how we do things and how panels can best fit into how the project is run and then we go through the plans to make sure we’re all on the same page,” Sean says. “Every part is covered: How they’re designed, how we ship them, how they’ll be delivered, where and how installers should chalk walls in the context of the building control lines being used and how the panels will be set. We want wall panels to be easy to use, framers to succeed, and we want to prove to GCs that this is the best way to frame.”

Wall panels are becoming a big part of the conversation today because of the shortage of framing labor. Integrating sales concepts and education about the key details of how best to deploy wall panels will foster success. From there, taking the initiative to become part of the framer and GC installation team will help CMs provide the right tools at the right time to stack wall panel success. 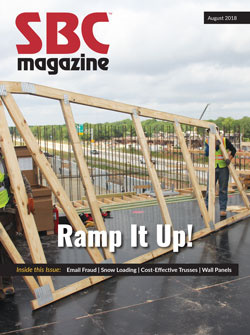