Your Door (and Wall) to Opportunity

Your Door (and Wall) to Opportunity

“The time is now to dream up new things. It’s the combination of the right system, price point and really, someone to stick their necks out and use it.”

Significant changes were made to the International Energy Conservation Code® (IECC), during the 2012 code cycle that directly affected wall panel manufacturers. For example, requirements for thermal resistance of materials and assemblies in homes (prescriptive R-values) increased and performance-path U-factors (rate of heat loss) decreased. This meant wall cavity insulation R-values increased from R-13 to R-13+5 or R20 (see digital edition for Table 1), which, in turn, required builders to rethink how they were going to build their walls in the field (e.g. 2x4 studs with exterior foam sheathing or 2x6 studs for extra cavity space). This, of course, increased labor and material costs, which would likely chew into the profits of framed exterior walls.

Frogale saw it as an opportunity, however, and jumped in the deep end head first. While increasing stud depth does allow for more insulation to be installed, he knew more was not always better.

“With different insulation material, take spray foam for example, you can still use a 2x4 wall while meeting the required R-value and you’ve added the strength of spray foam to a 2x4 stud,” Gene says.

We’ve written before on selling decreased build time when using wall panels, but Gene's forward thinking is an example of taking advantage of an adverse situation (an IECC code change) and creating a business opportunity through changing business practices a bit.

“In large markets panels are accepted by the guys who build 500-1,000 homes per year. They get it because when they’ve got a subdivision sold out and they want to move fast, that’s where wall panels are the answer,” Gene said.

There is of course always a cost/benefit analysis to making these decisions, but Gene subscribes to the idea that despite the added costs of investing in new machinery and physical setup within a component plant, the long-term outlook is weighted in favor of innovation. This is why he has embraced the concept of factory-sprayed, energy efficient walls.

“So you have to incorporate a spray booth into your line and you have to have guys that are qualified, but in the end it’s really as simple as when the wall hits the end of the line, it’s stood up and sprayed,” Gene said. “It’s just the final step before stacking, loading, and delivery.”

The good news is there are a handful of companies that are designing high-efficiency wall panel assemblies. The trick is that whole part about finding someone to stick their neck out. Gene knows it only takes one job with one builder to make an impression that can jump-start the growth of insulated wall panel assemblies for a CM. That’s why he’s still following his gut. 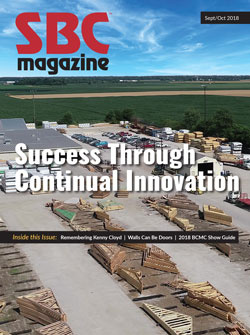 Editor's Message: It Could Be the ‘Biggest Show on Earth’!
President's Message: Communication and Compromise
Faces of the Industry: Chris Lambert
Parting Shots: BCMC Getaway
CM Perspective: There’s Always Something to Learn from Your Peers!
Safety Tip: Consistency is Key