Business Spending Up with GDP

Damn the uncertainty. Full speed ahead!

U.S. businesses are unsure where the economy is headed, but that has not stopped them from going ahead with capital spending projects. The dichotomy echoes consumer behavior, which finds consumers feeling pessimistic but still shopping. 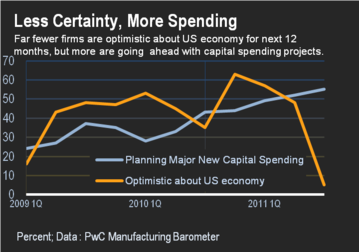 The big difference: unlike consumers who have seen little wage growth, the U.S. business sector has piles of money to buy new equipment, modernize plants and retrofit office space. Now they just need to add workers.

Shipments of non-defense capital goods excluding aircraft jumped at a healthy 16.7% last quarter. That was the largest gain in five quarters and suggests third-quarter gross domestic product growth was solid (GDP data will be released Thursday).

Company executives are approving spending plans, while at the same time growing more uncertain about the U.S. economy.

The third-quarter Manufacturing Barometer done by business consulting firm PwC shows a plunge in the percentage of U.S. manufacturers who feel good about the economy.

Only 5% are optimistic about the next 12 months. That was a steep drop from 48% thinking that in the second quarter and it’s the lowest share since the fourth quarter of 2008.

But factory executives are pessimistic. Rather the vast majority, 77%, are simply uncertain where the economy is headed.

In contrast to the macro-cloudiness, executives are pretty upbeat about their own company’s prospects. The PwC report shows 75% expect company revenues to grow this year–with a large 27% expecting growth of more than 10%.

The survey also shows 55% of respondents plan major new capital investments — which explains why orders for capex equipment are on the rise. More companies also expect to spend more on research and development.

The spending focus is not surprising, says Barry Misthal, who oversees the survey for PwC. Companies need to develop new products and improve the effectiveness of their operations. Despite uncertainty about the U.S. economy, U.S.-based companies must remain competitive in the global marketplace