The need for truss bracing guidance that is easier to install and still sufficient to prevent trusses from tipping over was made very clear when three framers were injured this past Monday in Scandia, Minnesota. According to the CBS affiliate WCCO:

“Three construction workers are hurt after a pole barn they were building collapsed. It happened around 4:50 p.m. in Scandia.

The Washington County Sheriff says the three men were setting trusses in a pole-barn type building. When they went to secure them, one tipped over. That caused a domino effect, causing several trusses to fall.

A man inside was seriously hurt. Two men on the roof were injured but not as badly. All three were taken to the hospital.”

At BCMC this year, SBCA and the National Framers Council (NFC) conducted a truss bracing demonstration on the show floor. The following video underscores the performance of trusses under load if web member-only lateral restraint and diagonal bracing is installed well:

The system’s performance indicates there is an opportunity to develop more framer-friendly bracing guidance in BCSI. This approach has the potential to eliminate the need to install top chord bracing, which is more difficult and as a consequence is often neglected, making it easier for trusses to domino. 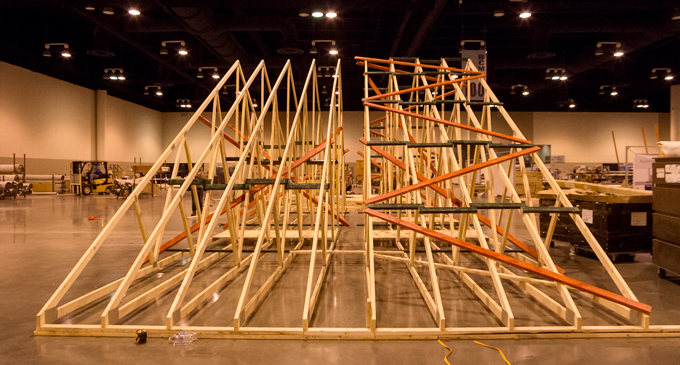 Putting yourself in the shoes of a framer installing these trusses, which bracing approach would you prefer?