In an ideal world, your wall panelization line (wood or steel stud) works like a team of world champion Olympic relay runners with each machine smoothing handing off to the next machine and then returning to the next task. The Real World is often less efficient, with some processes taking longer than others, which creates profit-robbing bottlenecks in your line. In addition, the transfers between stages usually need to be initiated by a human (who must be constantly attentive and managing the controls).

To help companies to address such issues and successfully improve their throughput while, at the same time, making the task require less "mindfulness" by the operators, Triad has engineered and created a new Transfer Station (with built-in Cerebellum Technology). The transfer station accepts a wall (for example, from your high-capacity Triad Generation 3 Framing Table). The Transfer Station then communicates with the downstream Power Conveyor and initiates the transfer ONLY when the Power Conveyor is open and ready to accept the next wall panel. 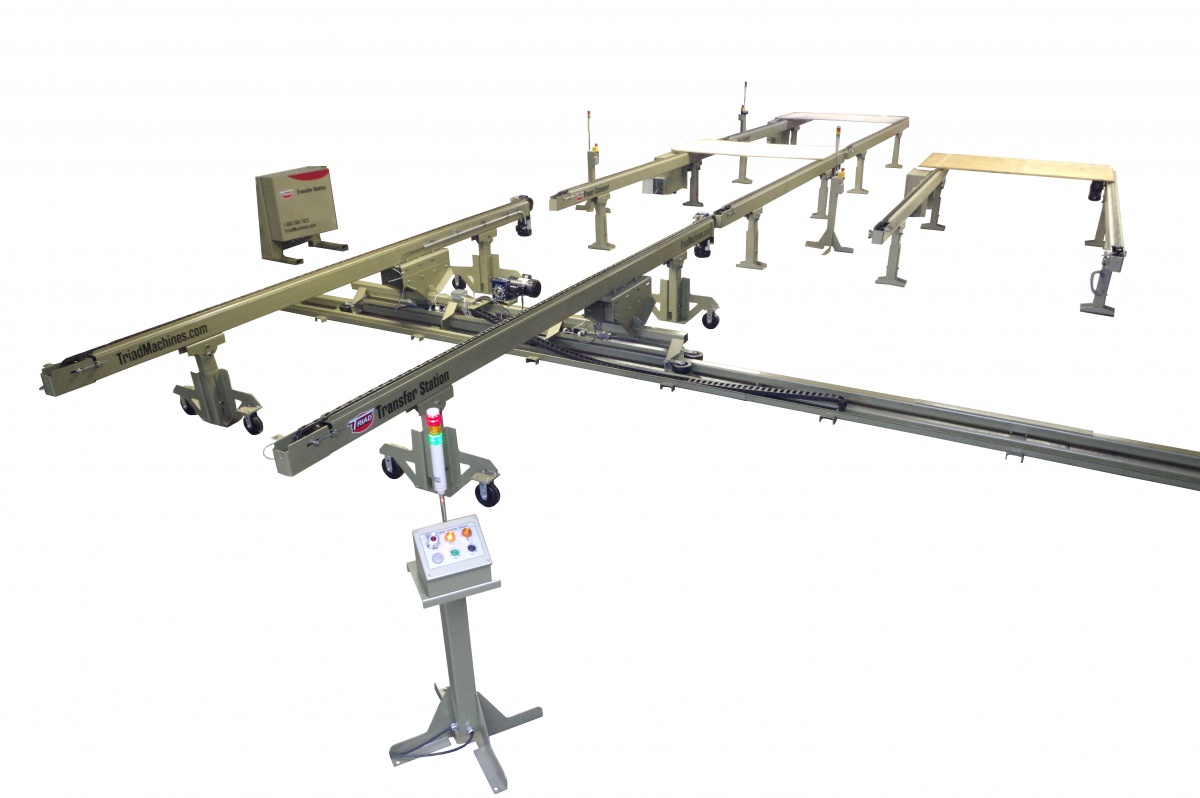 In addition, the Transfer Station moves at a right angle to your production line, allowing one Framing Table (for example) to feed TWO lines/power conveyors. This allows you to have an Exterior Wall Line directly beside an Interior Wall Line, being fed by a SINGLE Framing Table (as just one example). The Transfer Station can remain parked at the second line entry point, or be set to automatically return when it has completed hand-off to the Power Conveyor.

Each component in the Transfer Station and Power Conveyor system is equipped with a set of Stack Lights to indicate whether that component is currently available to accept (Green), in the process of transferring (Flashing Yellow), or currently full and awaiting its hand-off (Solid Yellow). These lights are simply to let anyone know, at a glance, where things are moving (or moving to next) and do not require operator intervention to occur. The exception is a red light, which indicates a fault or other stoppage.

The Transfer Station control is a simple two-button controller which starts the process of line selection and hand-off (with an optional auto-return). We've created two videos that explain and show the Triad Transfer Station and how it communicates with our connected Power Conveyors in two lines: [YouTube links go here]

Made in the USA, Triad has been creating machines that improve the builder's bottom line for nearly 60 years. The new Triad Transfer Station is just the latest innovation from the company that was there at the start of the Modular Home Building and Wall Panelization industries. For more information on this, or any of our Triad Machines for the professional builder (or our specialized Stair Machines for the professional stair shop): www.TriadMachines.com or call the factory at 1-800-568-7423.

Posted on June 12, 2017 in Industry Announcements