In memoriam by Joe Kannapell, SVP for MiTek USA 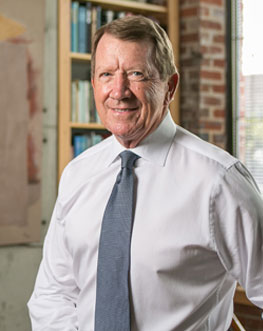 Holt Gwyn’s wit, and his legal brilliance, lit our SBCA chapters from the Carolinas to W.  His generous, uncompensated work has greatly enriched our industry and our Chapter members.  Holt was called upon early in the life of our North Carolina Chapter, and, by his professional influence, brought that Chapter to a vigorous life.  He pulled us together to meet contentious industry challenges from Charlotte (Mecklenburg County) to Raleigh (Wake County).  Without his guidance and influence, Carolina CM’s might well be required to seal truss placement plans.   He was our Chapter guardian, maintainer of records, and moderator of business practices.  Yet he was eminently practical when we fell short of quorums or skirted other aspects of our Bylaws.

When we asked Holt to assist in forming our Capital Area Chapter, he eagerly performed the same essential services.  That he “knew the difference between a top plate and joist” was clear in his empathetic Construction Law seminars during our meetings.

That a man with his resume (please read it below) would spend his valuable time and money to fly to DC and attend our small  get-togethers, reflects his goodness.  Yet Holt was an imminently humble man, and only by happenstance would we learn that he belonged to one of the most prestigious law firms in DC, Patton Bloggs, with partners the likes of Senators Trent Lott and Rob Portman.  He was friends with Lanny Davis, counselor to President Bill Clinton, and he had a keen insight into politics and human relations.

Holt must have sensed the need in our nascent industry for his construction law expertise and guidance., his forte.  He clearly answered that call and he leaves  our Carolina and Capital Area Chapters in prosperous shape.  We are indebted to his selfless service.

This great man will be sorely missed.

Allen Holt Gwyn, civic leader and nationally-renowned construction lawyer, arbitrator and mediator, passed away Monday, September 18, 2017. Born on September 11, 1949, Holt grew up in Winston-Salem in a family proud of its long legacy as native North Carolinians for many generations. Holt was a graduate of the University of North Carolina at Chapel Hill and the Wake Forest University School of Law.

Upon graduating from law school, he moved to Greensboro and joined the office of the United States Attorney, Middle District of North Carolina, where as an assistant U.S. Attorney he prosecuted white collar fraud and environmental violations, and represented U.S. agencies in civil disputes. After leaving the U.S. Attorney's office, Holt joined the law firm of Falk, Carruthers & Roth, PA in Greensboro as a civil litigation partner. It was there that he began developing his expertise in construction law. Some years later, he became a partner in the law firm of Patton Boggs, working in its Greensboro office.

In 1999, Holt and his longtime law partners, Richard Conner and Jim Schenck, founded the construction law firm of Conner Gwyn Schenck PLLC, with offices in Raleigh and in Greensboro. In his professional life, Holt was a leader and a builder. When he participated in a civic or professional organization he rose in the leadership, helped to build the organization and often left it in better shape than it was before. He was a man of honor and integrity. Holt was insightful and had a keen intellect.

Always willing to help others, he was a remarkable mentor to those seeking direction as to how to succeed in a legal career. Holt touched many lives in a positive way. His impact on the construction law bar has been invaluable. Holt liked to say that his job was placing himself between his clients and trouble and protecting them as best he could. He excelled in that regard. He thought strategically and solved problems creatively. If a trial was required, Holt was an experienced first chair lawyer and he was always prepared at trial.

Holt Gwyn was generally considered one of the finest construction litigation attorneys in the state. He was admitted to practice in the state and federal courts of North Carolina, the United States Court of Appeals for the Fourth Circuit, and the United States Supreme Court. Holt's strong work ethic was evident from the time he was young.

While growing up in Winston-Salem, he worked summers on his family farms where he learned how things were built. Holt used to say that when he went into private law practice, the contractors who were clients of the firm began seeking him out because he knew the difference between a top plate and a joist. Holt was a member of the American Bar Association, the North Carolina Bar Association and the Greensboro Bar Association.

He was a highly regarded continuing legal education presenter for the N.C. Bar Association who never hesitated to share his wealth of knowledge with other members of the bar. Holt was often called upon to serve as a mediator and arbitrator in commercial disputes a measure of the respect that he earned from his peers. He was a member of a select panel of arbitrators formed by the American Arbitration Association to hear large and complex construction cases, and was a member of the American Arbitration Association's Carolinas panel of mediators.

Holt was selected as a Fellow of the College of Commercial Arbitrators, and as a Fellow of the Chartered Institute of Arbitrators, London, UK. He was a North Carolina Superior Court certified mediator, and charter member of the N.C. Academy of Superior Court Mediators. Holt served as a mediator and as a special master in the federal district courts within North Carolina.

He gave back to the legal profession and was recognized for his contributions. Holt was elected in 1999 as chair of the American Bar Association Forum on Construction Law, the nation's premiere construction law group, with over 6,000 members. He was the first North Carolina lawyer to chair that organization. Closer to home, in 2014, he was selected by North Carolina lawyers as chair of the North Carolina Bar Association's construction law section. Holt was selected as a Fellow in the American College of Construction Lawyers, where he served on its board and as its president.

His contributions to the profession continued with his writing and teaching. Holt was co-editor of the treatise entitled North Carolina Construction Law, published and updated, editor-in-chief of the Journal of the American College of Construction Lawyers, co-editor of the College of Commercial Arbitrators Guide to Best Practices in Commercial Arbitrations, and co-editor of Construction Damages and Remedies, an ABA publication. He authored numerous papers, articles, and publications on construction law topics in addition and frequently lectured to construction industry trade groups and bar associations. Holt deeply valued the many close and life-long friendships that were forged with the special and talented people that he met and worked with in his professional endeavors.

He was a renaissance man, who had many interests and many talents. It seemed to those who knew him best that he kept current with everything, be it news of the day, developments in the field of law, sports, music, literature or the latest trends in art. He and his brothers built a log house near Fancy Gap, Virginia along the Blue Ridge Parkway that he shared with his family. He was well travelled and well read. He liked to have a good time and he knew how to throw a party.

When he wasn't working, Holt could often be seen on the golf course at Greensboro Country Club, where he was a member and served on its Board, or at Eagle Point Golf Club in Wilmington. Holt was an accomplished boat skipper, often sailing with his many friends. Holt was a talented musician and singer. During high school he was a member of the Winston-Salem Symphony where he played the violin. Soon after, however, he discovered his passion in singing and playing the guitar.

During an open mike night in 1977, Holt met another attorney musician, David Niblock of Winston-Salem. Niblock and Gwyn performed gigs in their spare time at local venues and events. They opened shows for American Blues rocker, Delbert McClinton, and for Sea Level, an offshoot of the Allman Brothers Band. More recently, they could be heard playing at local eateries and performing as a part of a Greensboro City-sponsored outdoor concert series. He could play a mean guitar while belting out Don McLean's song, American Pie (the full eight and half minute version!), while enthusiastically encouraging his audience to join in on the chorus.

He gave generously of his time and talents to many community and civic organizations and agencies. Holt followed his love and passion for music into the arts community in Greensboro, where he served on the Boards of the Greensboro Symphony Orchestra, the Eastern Music Festival, Green Hill Center for North Carolina Art and the Cultural Arts Council of Greensboro. As an active member of the local community, Holt was a charter member of the Board of Directors of Downtown Greensboro, Inc., served as a member of the Board of the Greensboro Area Chamber of Commerce, as president of Preservation Greensboro Incorporated, and as chair of the Guilford County Advisory Board for Environmental Quality. He also served as a member of the Guilford County Volunteers to the Court First Offender Program.

Holt met Beth Boulton in late 2000. Holt and Beth were married on November 23, 2002. In marriage, they forged a strong and loving partnership and spent many happy years together, traveling and enjoying their extended family and a host of friends. Holt was predeceased by his parents Allen H. Gwyn, Sr. and Susanna Ray Gwyn, and by his wife, Margaret Ann "Peggy" Wilkes, who died in 1998.

Surviving members of Holt's family are his wife, Beth Boulton of Greensboro, his brother J. Richard Gwyn and wife, Mary of Annapolis, Maryland, his brother Scott L. Gwyn and wife, Robin of Winston Salem, and his sister S. Revelle Gwyn and her husband, Meyer Dworsky of Huntsville, Alabama, ten nieces and nephews of whom he was very proud, numerous cousins, and his beloved dog, Mamie.

Posted on October 30, 2017 in Industry Announcements