Competition makes everyone in a market better. That is why SBCA continues to fight for a free and fair market place that has access to accurate and transparent information, which facilitates good decision making. Transparency not only serves the best interest of all of SBCA members, it benefits the entire market because, generally, it allows the products that are most effective at meeting market needs to win.

This cannot happen when a competitive advantage is intentionally obscured from market participants. One example of this is APA’s approach to OSB design values and standard factors for OSB equivalency. In a letter APA president Ed Elias wrote to SBCA on February 6, 2013, APA’s approach to transparency is made clear:

"APA staff has reviewed the information that was shared with us and we have the following comments and concerns:

We believe that a major goal for the SBCA position is to provide a cost-effective engineering solution to their membership and as such this goal serves the SBCA membership well. However, by establishing standard factors in which product equivalency or system performance are applied generically, an unintended consequence may be that non-wood products (e.g. foam sheathing) gain an advantage and supplant traditional OSB market share.

This is not in our Association member’s best interests..."

Through this statement, it is apparent APA wants to protect OSB’s competitive advantage (through overstated design values) and prevent the use of "standard factors for OSB equivalency.”

In 2013 SBCA did its best, through SBCRI science-based testing, to encourage APA to establish a transparent and level playing field for all structural sheathing products in the market. APA disregarded SBCRI’s OSB test analysis. When SBCA persisted in disseminating this information, APA’s legal counsel hoped to silence SBCA by sending the following letter (click on the image to view a larger version): 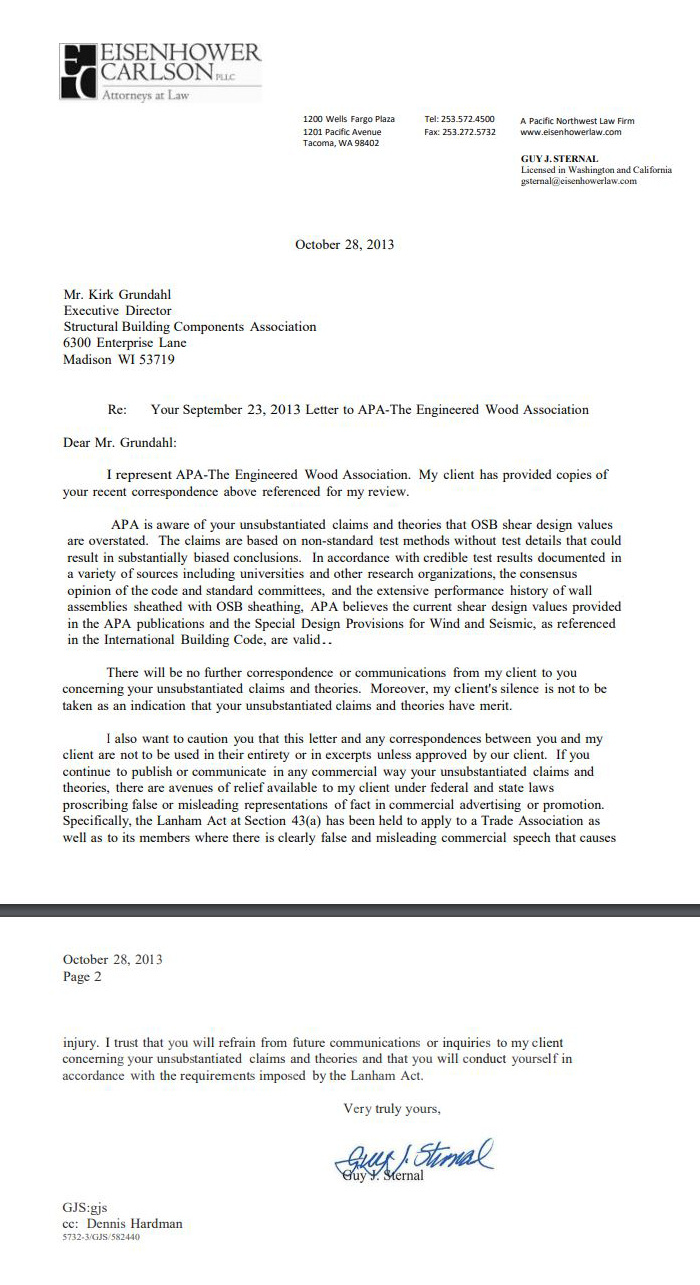 Mr. Kent Pagel, SBCA’s legal counsel responded with the following letter on November 25, 2013 (click on the image to view a larger version): 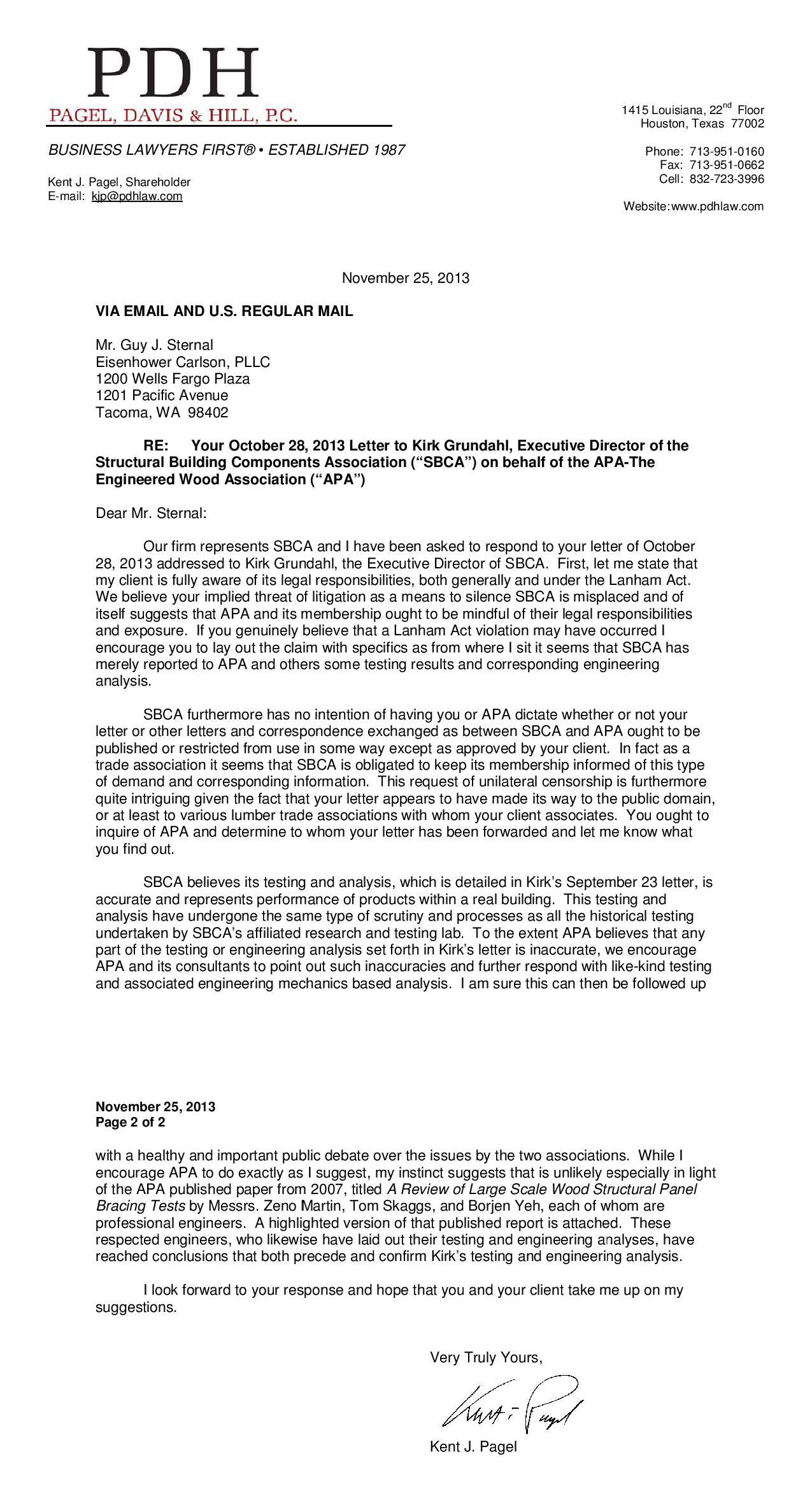 APA has declined to respond to Pagel’s November 25, 2013 letter with an analysis of where SBCRI testing or analysis was inaccurate or with like-kind testing data showing SBCRI’s data was inaccurate. The 2007 paper APA provided to the Building Seismic Safety Committee (BSSC report) that Pagel references in letter can be found here. The key test data to note is highlighted below (click on the image to view a larger version):

Key Findings: Isolated Method 3 bracing without gypsum has an average peak value of 351 plf and with gypsum of 381 plf. These values are 55% to 60% of the assumed Method 3 “design value” of 634 plf.

This BSSC report is remarkable because APA’s own testing supports the “standard factor for OSB equivalency” approach as proposed in the table below based on SBCRI testing and analysis (note that the average peak load for an OSB braced wall panel without gypsum from the table above is 351 (pf), while the SBCRI tested strength in the table below is 350 (pf) (click on the image to view a larger version): 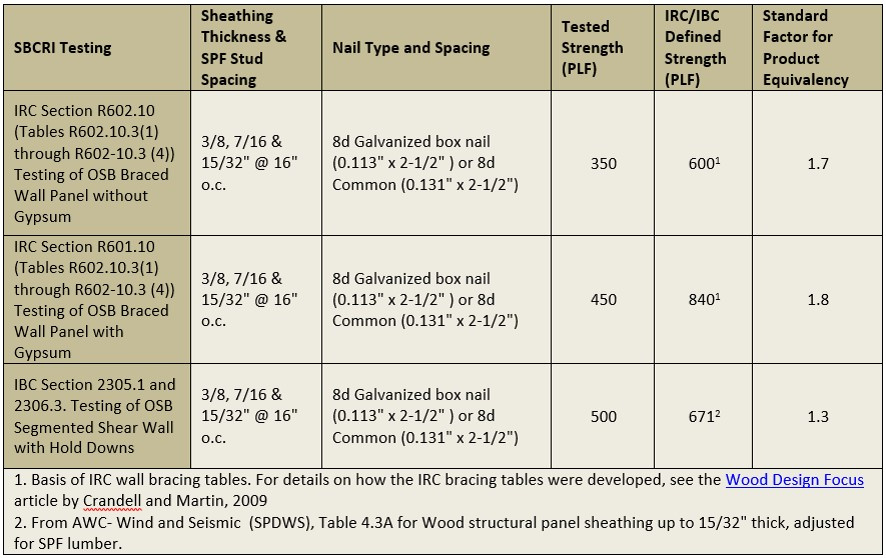 The BSSC report also includes the graphic below, which provides a good illustration of APA’s efforts to obscure how the OSB design values adopted into the building code were derived and again supports the concept of "standard factors for OSB equivalency." The APA work also confirms that APA is very aware of the effect of, and the need to account for, testing and application boundary conditions. Tests using steel beams have boundary condition effects that can materially influence test results. (click on the image to view a larger version):

In Figure 1 (above), the numbers in parentheses refer to the test data row number of Table 2. Also, in Figure 1, the values making up the ranges are based on tests with no hold down devices. Considering only the range of isolated bracing with no gypsum, Figure 1 data shows that “whole house effects” (long walls, and stiff sections (such as a 2x10) above walls), can lead to peak strength test results close to that of a single 4-ft wall isolated bracing segment with a hold down.

For more in-depth knowledge on this topic, please review this collection of published articles.