The recent heatwave that overwhelmed much of the U.S. prompted New York Mayor Bill de Blasio to declare a state of emergency according to the New York Times, announcing, “We have not seen temperatures like this in at least seven years.” The New York Police Department even admonished people not to go outside, half-joking, “Sunday has been canceled. Stay indoors, nothing to see here. Really, we got this." And this was before a black-out cut off electricity to 50,000 resident. 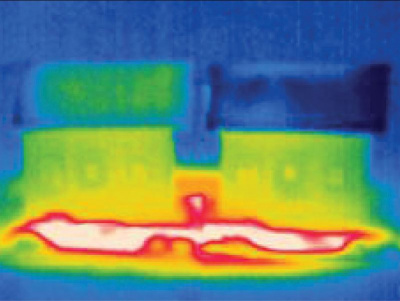 The challenge of managing climactic extremes is only expected to worsen. According to the U.S. Global Change Research Program, the average number of annual heat waves in major U.S. cities has tripled from two to six since the 1960s. According to a recent article in Environmental Research Communications, temperatures above 100 F may occur for a third of the year in Gulf Coast states by the end of this century.

To address this, architects are increasingly turning to cool-roof technologies as a fundamental climate adaptation strategy. Simply defined, a cool roof is more reflective and less heat absorptive than a typical roof. These two data points, solar reflectance and thermal emittance, are measured on a scale between 0 (poor) and 1 (excellent); that is, the coolest roof would be rated a 1 in both categories. Architecture2030’s 2030 Palette recommends that roofs be light in surface color and possess a solar reflectance and thermal emittance exceeding 0.7 and 0.75, respectively.

Cool roofs have a notable drawback, however. In climates with cold to moderate winters, sunlight is reflected rather than absorbed during those months, resulting in colder interiors and higher heating bills. Thus, architects and their clients must discuss the heat gain to energy trade-off when deciding how cool the roof should be.

One recent option is to specify a smart roof. A new generation of adaptive roofing

technologies takes the cool roof a step further, using materials able to change their reflectance and thermal emittance properties seasonally. Although these technologies are relatively new in the marketplace, the promise of a genuinely climate-responsive roof is close at hand.

In a 2007 paper, Jan Kosny, once a researcher in the Oak Ridge National Laboratory’s (ORNL) Building Envelopes group, explained that phase change materials (PCMs) were tested extensively in the 1970s and 1980s for residential construction. PCMs store and release significant amounts of heat when undergoing a physical state change. Overcoming the chemical instability and flammability issues of the early experiments, Kosny and his colleagueORNL scientist Bill Miller developed a prototype roof system that encapsulates an inorganic PCM between reflective aluminum foil sheets. (PCMs employed in this way reduce summer cooling loads without impairing winter thermal performance.) Used in conjunction with a proprietary attic heat exhaust, the ORNL system achieves a 20 F reduction in interior temperature inside a conventional attic on a 92 F summer day.

Other technologies utilize smart coatings that may be applied directly to roofing materials. Horseheads, N.Y.–based United Environment & Energy has invented a bio-based thermochromic material that can selectively reflect and absorb solar heat. The substance consists of waste cooking oil with an ingredient that causes it to change color when hot. Principal investigator Ben Wen and his team coated asphalt roofing shingles with the substance, essentially transforming shingles into smart composites that reduce both cooling and heating loads of buildings. Moreover, according to UEE’s Department of Energy grant submission, “The use of a renewable and agriculture based coating product will also eliminate the odor and volatile organic compounds emissions associated with traditional roof coating products and generate more economic opportunity for the agricultural sector.”

In another development, scientists at ETH Zurich have devised a surface technology that “sweats” like human skin to cool buildings. The critical ingredient is a thermo-responsive hydrogel, which releases stored water when it exceeds a target temperature of 90 F. When the roof becomes this hot, the 3-millimeter-thick hydrogel layer “sweats” between a polycarbonate membrane and PVC foil, essentially flooding the roof. This water subsequently evaporates, prolonging a cooler surface temperature for about three hours in tests. According to the researchers, this reversible technology could result in an energy savings of 220 kilowatts annually for a single detached residence. Tropical climates would make ideal locations, given the abundance of rain to recharge the roof’s water stores.

In addition to panels and shingles, another standard roof module is tiles. According to materials scientists at the New University of Lisbon, in Portugal, the roof deserves particular attention in energy studies since conventional roofing tiles (and other materials) store between 85 and 95 percent of the solar energy they receive. To solve this problem, the researchers have created smart ceramic roof tiles with a nanostructured optical surface. This surface is made of vanadium oxide (VO2), a thermochromic material commonly used in smart windows whose transition temperature is 154 F. Infrared light passes freely through VO2 below this temperature but is mostly blocked above it. By adding tungsten trioxide, the scientists brought the transition temperature down to 120 F, a more suitable threshold for building surfaces.

University of Boulder engineers Jenna Testa and Moncef Krarti have evaluated smart roof technologies in “a review of benefits and limitations of static and switchable cool roof systems,” published in Renewable and Sustainable Energy Reviews. They simulated smart roofing products in different ASHRAE climate zones and found that they could reduce energy use by up to 6 percent compared with static (non-smart) cool roof equivalents. They also determined that such technologies could deliver further gains when applied to other opaque building surfaces, such as walls, revealing up to 11 % additional savings.

Smart roof materials are not without limitations, however. For example, in sunny but cold climates, a lower reflectance mode may not be desirable. Similarly, cloudy but warm climates may allow too much heat to enter a building. Nevertheless, smart roof technologies compare favorably overall with the widely recommended cool roofs in their climate responsiveness—a trait that will doubtless increase in importance.