Consider this: from 1968 to 2008, a span of 40 years, there was only one year in which fewer new housing units were built than in 2017 (Exhibit 1)—and this despite rising demand in a growing economy.

In a recent Insight, we examined the demand side of the housing market, focusing particularly on the experiences of young adults. Our research shows that housing costs have been the most significant factor preventing young adults from forming their own households as well as buying a house. Robust demand but weak supply has driven up housing prices rapidly, which in turn is acting as a force to balance demand against supply. Facing higher home prices and rents, many young people are doubling up in shared living arrangements or living at home with their parents.

In our earlier Forecast, we discussed two main reasons for the lower levels of housing production (relative to population): increase in development costs and shortage of skilled labor.

Home building costs encompass the cost of land and regulatory costs. Since 2010, the cost of land has averaged about 23 percent of total home building expenses.1 But in some markets like San Jose, Santa Ana, Oakland, and Los Angeles, land can cost upward of 70 percent of the cost of building a home. Laws and regulations such as local zoning restrictions on lot sizes and building height and open space designations also increase the cost of building a home, in turn reducing the supply of new homes. Regulatory costs increased 29 percent between 2011 and 2016, the National Association of Home Builders (NAHB) estimates.

However, other factors are constraining the supply of housing, as well. Opposition to new developments near homes and communities by residents—so-called NIMBYism (Not In My Back Yard)—is restricting new construction in some locales. With young adults flocking to urban areas from suburban or rural areas, housing demand in urban areas is growing, but it takes time to construct housing to accommodate the growing demand

After nearly a decade of low levels of building, housing stock is well short of what the United States needs. In this Insight, we focus on the consequences, rather than the causes. Our analysis shows that 370,000 fewer units were built in 2017 than needed to satisfy demand. Overall, the shortfall ranges from a low of 0.9 million to a high of 4.0 million housing units, as of the second quarter of 2018, depending on the assumptions (see discussion later in this Insight). If supply continues to fall short of demand, home prices and rents are likely to outpace income and household formation will fail to reach potential. The inadequate level of U.S. housing supply is a major challenge facing the housing market in 2018 and likely for years to come. 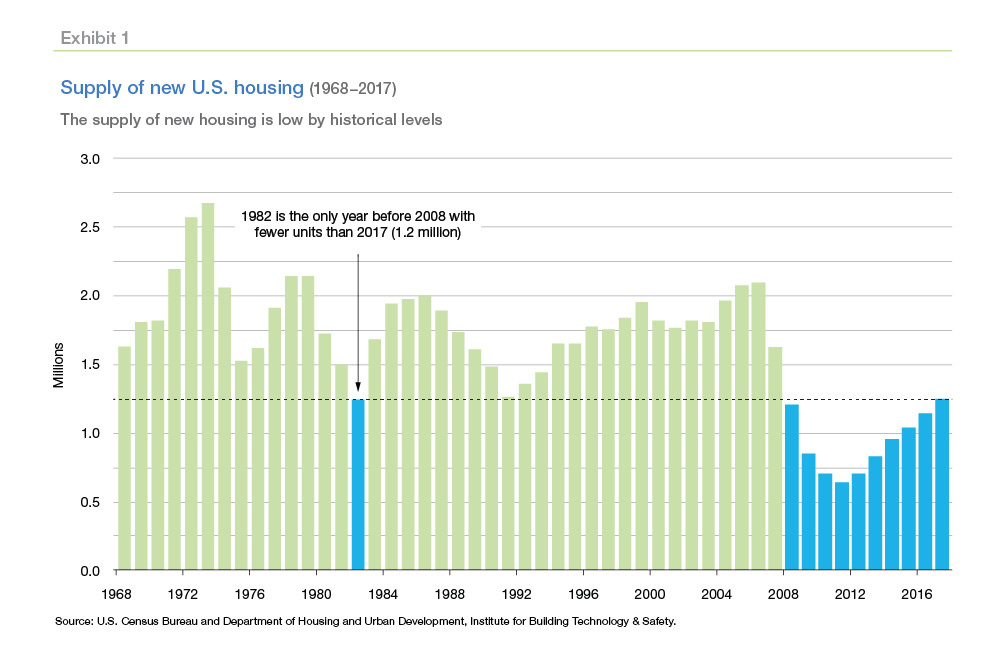 The current pace of building is not enough to meet demand

In 2017, the United States added 1.25 million additional housing units, which includes homes, apartments, and manufactured homes. But the country needs far more units to meet demand. Adding up all the gross additions to the housing supply and comparing that to the replacement of depreciating stock and the fundamentals of housing demand reveals a large and persistent shortfall in recent years. We estimate that the current rate of demand is approximately 1.62 million housing units per year—370,000 units more per year than the current rate of supply.

Three factors drive the need for housing construction: growing demand from a growing population; the need to replenish existing stock; and the need for vacant units in a well-functioning market. We examine each factor in turn next.

The U.S. population of first-time homebuyers has become younger in recent years. Nearly 90 million residents were between 15 and 34 years old in the United States in 2016, 6 million more than those aged 35 to 54, the U.S. Census Bureau reports. With the age of the median first-time home buyer now at 31 years, these young adults comprise a large share of the first-time home buyer population and therefore drive demand higher.

Conceivably, young adults could buy homes vacated by older Americans, but as our February 2017 Insightexplains, seniors aged 55+ overwhelmingly prefer to age in place. Better health and education has boosted and extended housing demand from seniors, who are now much slower to transition out of homeownership than prior generations.2 Altogether, we estimate that U.S. net household growth needs to average around 1.1 million households over the next few years to meet the needs of a growing population. Eventually as the Boomers age out of the housing market and young adults are replaced by the smaller Generation Z, the growth in households will moderate somewhat, though the date for that moderation is well into the next decade.

Depreciating stock must be replenished

Over time, housing stock gradually depreciates and therefore must be replaced. The U.S. Census Bureau3computes the loss rate for U.S. houses, apartments, and manufactured homes based on the age and location of the unit. Estimates from the Census Bureau indicate that the U.S. housing market needs to add approximately 350,000 units per year to replace lost units.4

In addition to catering to the growing population and replacing lost units, a well-functioning housing market requires some vacant properties for sale and for rent (classified as “year-round vacant” by the U.S. Census Bureau). Vacant homes increase liquidity in the market, enable prospective buyers to find a match, and give prospective sellers confidence to list their home for sale. Vacancy rates are an important indicator of housing market vitality. Too high of a vacancy rate reflects a moribund 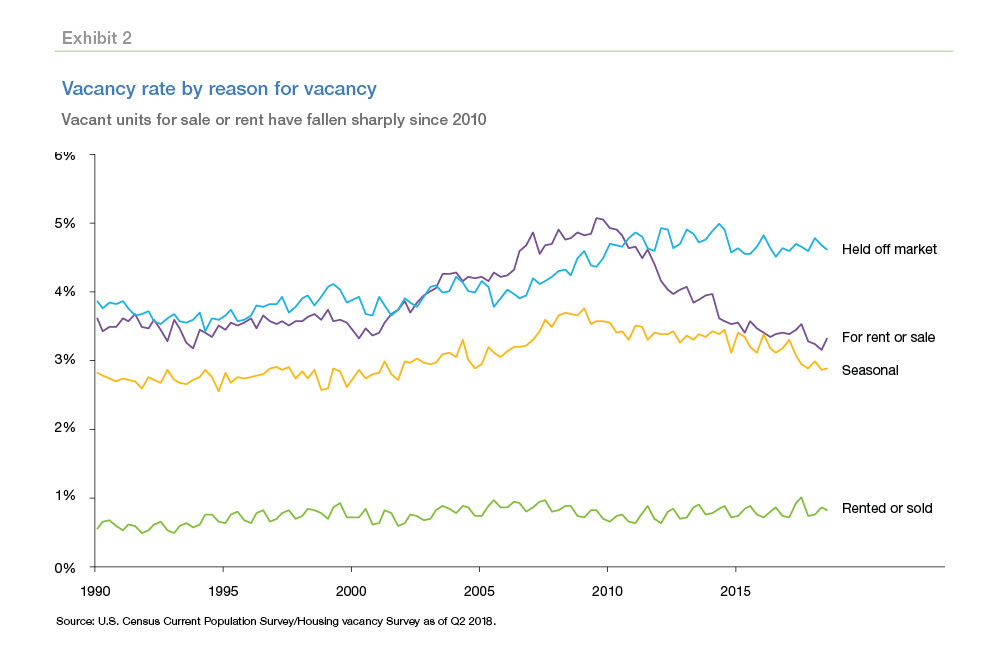 market, while too low of a rate reduces the efficiency of the marketplace. Exhibit 2 shows trends in the vacancy rate for U.S. housing stock. The vacancy rate has declined sharply since 2010, mostly due to lack of inventory.

Many vacant homes in the United States are seasonal units, or vacation homes. About 3 percent of the U.S. housing stock is seasonally vacant. As the housing stock expands, so will the demand for second homes. Second home demand adds up to approximately 100,000 units per year. The National Association of Home Builders has estimated that the stock of second homes increased by 120,000 units per year from 2009 to 2014. With the overall economy continuing to grow and wealthier households doing especially well, we anticipate the demand for second homes to continue at a similar pace in years to come.

The trend of year-round vacant properties that are not on the market for sale or rent has also been growing. Part of the reason why year-round vacancies have risen is due to geographic variations in housing demand. Structures are long-lived and can outlast their demand. As the population of the United States has drifted south and west, the populations of many legacy cities in the Midwest and Northeast that once boasted large populations have now declined sharply. If the overall year-round vacancy rate was to remain constant at around 10 percent, then for each 1 million additional households, 111,000 vacant units would need to be added to keep the vacancy rate fixed. 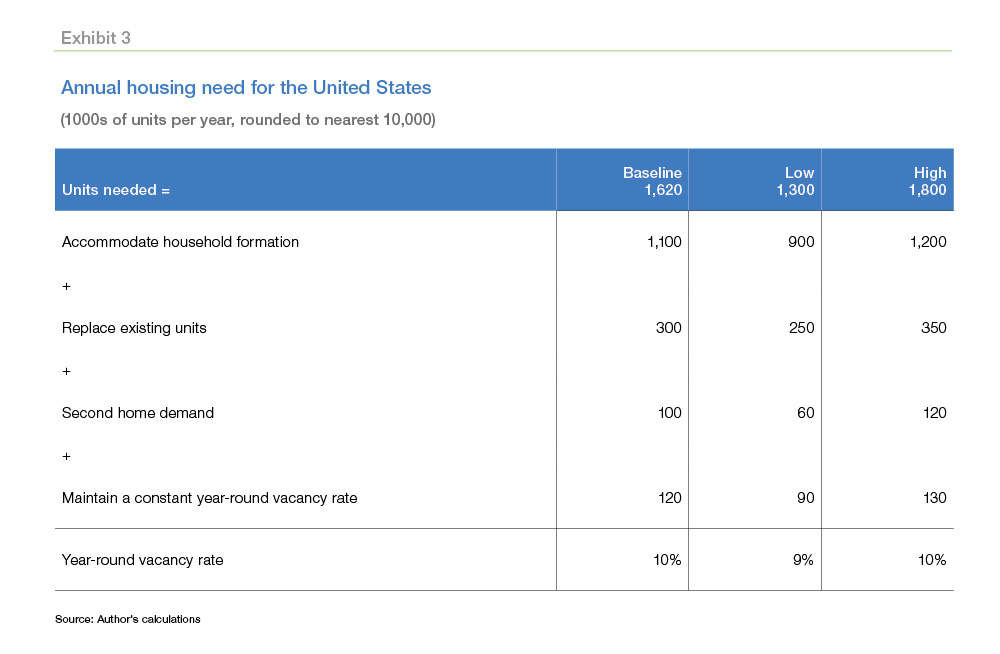 Altogether, we estimate that 1.62 million units are needed annually to meet the housing demand: 1.1 million to accommodate household growth; 300,000 units to replace depreciated existing stock; 100,000 to meet the demand for second homes; and 120,000 units to provide enough vacant homes to maintain an efficient marketplace. This estimate is our baseline. Exhibit 3 also presents estimates based on low and high scenarios. There is considerable uncertainty around each assumption and each estimate. Thus, the true level of long-run housing demand is uncertain. However, even the low estimate (1.30 million units per year) exceeds the current rate of housing construction (1.25 million units in 2017)—meaning even under a low estimate, at least 50,000 American households each year can’t buy or rent a home because it hasn’t been built.

How many housing units are needed to match long-term demand?

The preceding analysis accounts for a one-year shortfall, but as noted, residential construction in the United States has been historically weak for almost a decade. If we compare trends over this century, how does the current housing supply compare to our estimates of housing demand? As of the second quarter of 2018, we estimate that the U.S. economy is about 2.5 million housing units below what is needed to match long-term demand.

The U.S. economy is about 2.5 million housing units below what is needed to match long-term demand.

First, we need an estimate of the long-term housing vacancy rate. Based on the previous discussion, we estimate that this vacancy rate should be around 13 percent. The vacancy rate for the United States is 12.3 percent, according to the latest U.S. Census Bureau Housing Vacancy Survey (HVS) (second quarter of 2018). Given a target vacancy rate of 13 percent, it may appear that the housing market is roughly balanced, or perhaps only a little undersupplied. However, this analysis only considers current market conditions and does not account for pent-up housing demand. 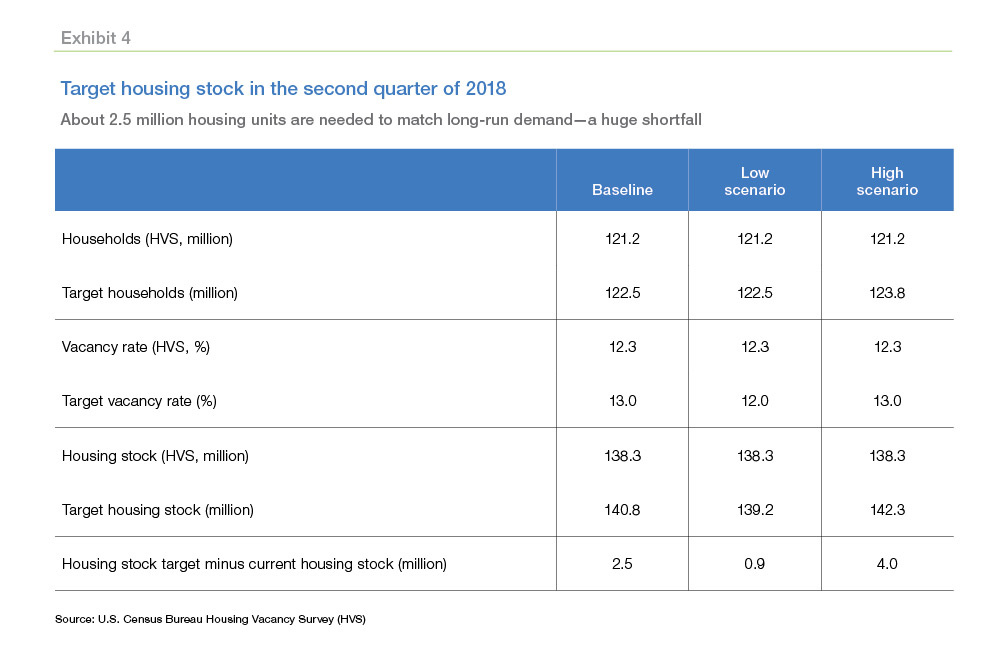 To bridge the gap between the current housing supply and future demand, housing construction will need to accelerate. First, the annual gap of 370,000 units currently being undersupplied relative to long-term demand must be filled. Then, the housing market will need to supply excess units for some time to bring the housing stock up to its target level.

Part of the reason the U.S. housing market is so undersupplied is because the areas of the country where employment has grown robustly are also areas where the housing stock is only inelastically supplied (See previous Insight). Even in areas with strong employment growth and long-run elastic housing supply—Texas, for example—shortfalls in skilled construction workers and available lots have prevented the housing supply from expanding rapidly enough in the short run to meet demand. Even in traditionally elastic housing markets, home prices are rising well above long-run averages.

Over time, the housing supply in high-growth but elastically supplied areas will expand, but in the interim, housing cost pressures may result in movement toward areas with lower housing costs. If housing demand shifts toward lower-cost housing markets that currently have available housing supply, the long-term vacancy rate could also begin to decline.

The United States is not building enough housing to meet demand. The current annual rate of construction is about 370,000 units below the level required by long-term housing demand. And after years of low levels of building, a significant shortfall has developed, with between 0.9 and 4.0 million too few housing units to accommodate long-term housing demand.

In our latest Forecast, we forecast housing construction to pick up gradually. However, it will still be a year or more before the level of building matches incremental annual long-term housing demand. To bridge the shortfall of total units, the U.S. housing market may need to supply more than 1.6 million units per year.

Until construction ramps up, housing costs will likely continue rising above income, constricting household formation and preventing homeownership for millions of potential households.