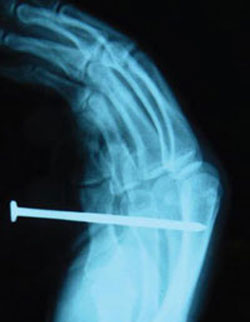 According to the CDC, more than 25,000 workers suffer nail gun injuries each year and several injuries have led to construction worker deaths.

David Klatzkin, Safety Director for Hull Associates in Grand Prairie, Texas, says they started to see an increase in nail gun injuries with their subcontractors in the first part of the year. “The main reason is that they’re hiring like crazy and not taking the time for proper hand tool safety training before sending guys out on the jobsite,” he explains.

A member of NFC’s Safety Committee, David suggested the council develop some additional resources for its FrameSAFE program to emphasize the importance of safe nail gun practices. As a result, three new Toolbox Talks were added to the program’s online subscriber dashboard earlier this month:

David says they push the use of FrameSAFE training resources with their subcontractors every chance they get. In addition to discussions about safety issues at their quarterly safety meetings with subs, they have also added the use of the nail gun safety training resources to their jobsite orientation process. 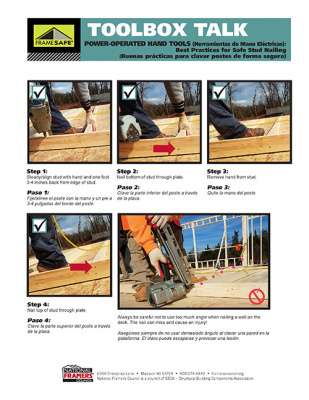 “You’ve got to keep this stuff in front of them,” says David. “Especially now, as it gets hotter and workers fatigue faster, they tend to want to get things done as quickly as possible. That’s when best practices are forgotten and bad things can happen. Staying ahead of it with regular reminders and training is the only way to go.”

FrameSAFE’s library of Toolbox Talks makes it easy to plan quick safety refreshers to stay ahead of near-misses and injury incidents. If you haven’t already, subscribe to FrameSAFE today for a wealth of safety training and awareness resources that will help you build your company’s culture of safety.