Is ‘Print-in-Place’ the Future of Spray Foams?

Technology is advancing at a rapid rate within many industries, including spray foam. Being aware of the advances in technology will not only help contractors, architects, and suppliers stay ahead of the competition, but it may also help with productiveness, safety, and expansion.

The breakdown of a Print-in-Place wall sample. PHOTO: STEVEN KEATING 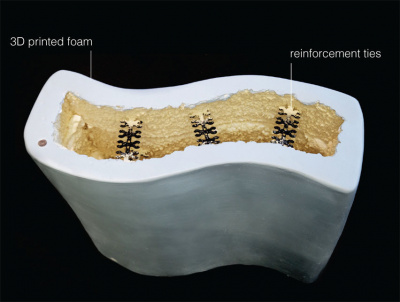 Many may be skeptical, or even threatened by technology, especially with the use of robots. Spray Foam Magazine sat down to chat with Julian Leland Bell, a former researcher at the Massachusetts Institute of Technology (MIT) to discuss his work on automated construction with spray foam, understanding the future use of robotics, and how they may help business, not hinder it.

During 2012, MIT student Steven Keating invented a concept for additive manufacturing at very large scales using spray foam. This concept, known as Print-in-Place (PiP) fabrication, involves building up spray foam in layers to create a three-dimensional mold for a structure. Then, a structural material such as concrete is poured into the mold to create a finished structure. Similar to insulated concrete form (ICF) construction in principle, Print-in-Place is naturally adapted to use by automated systems such as robot arms or 3D printers, and allows much more complex structures to be built. 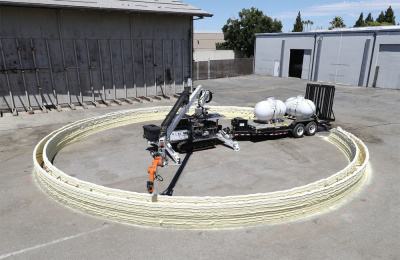 The concept of Print-in-Place fabrication involves building up spray foam in layers to create a three-dimensional mold for a structure by automated systems, such as 3D printers, and, in this case, a robot arm. PHOTO: STEVEN KEATING

The development of this novel manufacturing process also led to the creation of the first prototype of a Digital Construction Platform (DCP), a robotic arm system large enough to create architectural-scale structures. Investigating and experimenting with the theory of using technology for large scale digital manufacturing, Keating’s vision for the DCP was a serial-kinematic robot, rather than a parallel-kinematic robot-like gantry. Developing the serial-kinematic arm will eventually enable the robot to complete complicated tasks and help on construction sites. An example of this would be: administering spray foam to tall buildings, which will help with construction site safety issues. Spraying large, simple surfaces like flat walls with a robotic arm could allow human operators to concentrate on more complex areas of a building, ultimately saving time.

After the initial investigations took place, Keating battled with brain cancer and took a sabbatical, returning to the project in 2015 while completing his PhD. That’s when Julian Leland Bell was brought on to the team. Bell, a mechanical engineer with experience in robotics and manufacturing recalls, “I was brought in to help address some of the technical challenges of this project. The first prototype, DCPV1, got a lot of interest from large manufacturers like Dow Chemical and Altec. They were excited about the project and offered their support, with Dow donating their FROTH-PAK low pressure spray foam, and Altec donating the aerial lift vehicle used in our robotic system.

Google heard about the research and also provided funding and a worksite for the development of a second prototype, the DCPV2, between 2015 and 2016. Keating and Bell, along with MIT researcher Levi Cai and others, worked throughout the year to refine the DCPV2 prototype. Their work culminated in a full-scale printing demonstration in July 2017, when the team printed a 47-foot diameter, 12-foot tall section of a dome structure using Dow’s FROTHPAK low-pressure spray foam. Bell is honored when he explains, “Our dome remains one of the largest monolithically-fabricated 3D printed structures ever built. There are lots of people carrying out very interesting work with spray foam for additive manufacturing, but this idea of printing formworks that you could then cast concrete into to create robust structures, was really Steve’s genius. To see a real, architectural-scale structure built around this idea was incredible.”

“If the robot has a good map of the building, it can work with little need for human involvement.”

During the project the delivery rate was the same it would be for a human operator. One of the robot’s advantages lies in the fact that it is based around a tracked aerial lift vehicle. Bell explains, “The aerial lift vehicle weighs thousands of pounds; it’s basically a small tractor with a robot arm on top. It has the capacity to move a large amount of material. For our experiment, we took the largest size of FROTH-PAK cylinder Dow produces, loaded the components onto a trailer, which was attached to our robot, and had the robot drive with the trailer to the site where we were going to perform our print. Because we use Dow’s sprayer system, the volumetric construction rate of the robot is the same as a human operator with our current foam sprayer, but the amount of material that the robot can carry with it is very substantial. It is only limited by how big a tank you can provide for the robot.”

The work that the MIT team has accomplished on this experiment has laid the foundations for other companies and researchers to continue exploring applications of spray foam in 3D printing. PHOTO: STEVEN KEATING 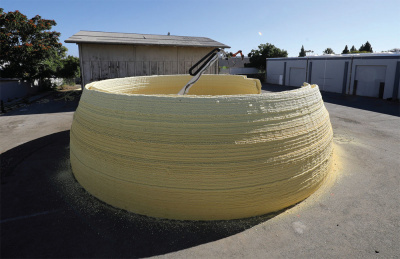 The initial project was research-based and has the potential to be developed within the industry. Quizzing Bell on how the DCP could possibly be advanced, Bell replies, “There are a number of ways to expand on this technology and one would be to administer the foam at a faster pace than a human application. Imagine if you had to spray the inside of a very simple but large structure, like a warehouse. A robot like this could spray foam the interior of a warehouse very rapidly. There would be no need to put human workers up on lift vehicles, placing them in potentially dangerous situations. If the robot has a good map of the building, it can work with little need for human involvement. The barriers to adoption of this are lower, too—the robot is just applying spray foam, not building a structure which has to meet building codes.”

The MIT team’s work has laid the foundations for other companies and researchers to continue exploring applications of spray foam in 3D printing. Branch Technology, based in Chattanooga, TN and BatiPrint3D, a method used by the University of Nantes, situated in France developed the system to progress Architectural-Scale printing with the application of spray foam.

Nantes University research team also built a 3D-printed house in Nantes. The project 3D printed polyurethane was sprayed layer-by-layer as a supporting structure, and then concrete was poured inside it. The outer 3D printed structure remains to form insulation reducing construction time, improving thermal insulation and reducing construction operating costs. Picture a structure that is built a reverse way of traditionally made walls.

Scientists, manufacturers and the public sector are all working together to build a future where technology, human and imagination all combine to develop exciting innovations. Humans will never fully be replaced by robots, but one thing is certain: if they are ignored, we will fall behind in business, losing out to competitors who will shape how this new and exciting technology is developed.