ASHRAE has released an expanded, revised version of a well-known energy standard.

“The goal of the 2019 version of 90.1 was to provide clearer guidance for exceeding efficiency goals,” said Drake Erbe, chair of the Standard 90.1 committee. “This new version focuses on energy-saving measures which we hope will reward designs for achieving energy cost levels above the standard minimum and result in more efficient buildings and more innovative solutions.” 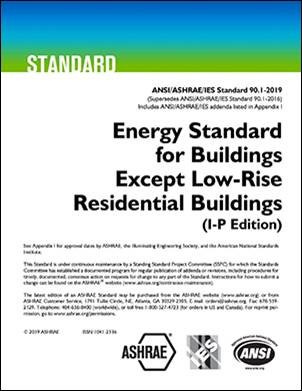 Some significant changes include:

Building Envelope: For vertical fenestration, the categories of “nonmetal framed” and “metal framed” products were combined. Minimum criteria for SHGC and U-factor were upgraded across all climate zones. The air leakage section was revised to clarify compliance. Changes to the vestibule section refined the exceptions and added a new option and associated criteria for using air curtains.

Energy Cost Budget Method: Numerous changes were made to ensure continuity. The baseline was set for on-site electricity generation systems.

Performance Rating Method: Appendix G rules and the corresponding baseline efficiency requirement were clarified. Explicit heating and cooling COPs were provided without fan for the baseline packaged cooling equipment. Rules were added for modeling the impact of automatic receptacle controls. More specific baseline rules were set for infiltration modeling. Clarification was added for how plant and coil sizing should be performed. Building performance factors in Section 4 were updated.

Both Compliance Paths: Clearer and more specific rules were added related to how renewables are treated. Extensive updates were added to the rules for lighting modeling.

Also new to the standard is use of the new fan energy index (FEI) as the metric for efficiency provisions for commercial and industrial fans and blowers.

Standard 90.1 has been a benchmark for the commercial building energy codes in the United States and a key basis for codes and standards around the world. The 2019 version is the 11th edition published since the original standard was first published in 1975 during the U.S. energy crisis.