Nexii Building Solutions Inc., a company that started in Moose Jaw, has set up its head office in Vancouver. 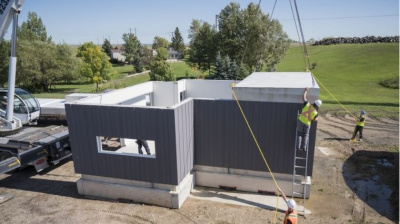 Nexiite building components such as floors and walls are prefabricated and bolted together on site. Images by Nexii Building Solutions

It currently employs 35 people at its manufacturing plant in Moose Jaw, and 50 at its head office in Vancouver. Next year, the company plans to open a new plant somewhere in the Lower Mainland.

The founders, brothers Ben and Michael Dombowsky from Moose Jaw, developed a proprietary new building material called Nexiite, which is an alternative to cement and concrete and can be used for multiple purposes in buildings, including floors, walls and roofs.

The company says it is waterproof, fire resistant and has a low carbon intensity.

Cement has a large carbon footprint, due to its energy intensity. Roughly 900 kilograms of CO2 is produced for every tonne of Portland cement produced, according to one study published last year in Science Direct.

Materials that have similar properties as cement, but lower carbon intensities, are being pursued as a way to decarbonize the construction sector.

Nexiite not only has a lower carbon footprint than concrete and steel, it also reduces the amount of buildings materials needed, which helps shrink the transportation carbon footprint as well, according to Nexii CEO Stephen Sidwell.

Sidwell, co-founder of the American fast-food restaurant LYFE Kitchen, came out of retirement to head the new company and has brought along a former business partner, Mike Roberts — former global president of McDonald’s — to sit on the company’s board of directors.

The company has already raised $10 million in investment from Lotus Capital Corp., the Beedie Group and Omicron Canada Inc.

“As a member of Nexii’s advisory committee, we are excited about the incredible potential we see in Nexii, and the significant pipeline of projects it is poised to deliver,” Shenoor Jadavji, president of Lotus Capital Corp., said in a press release.

“We are not only excited by the potential for broad applications of Nexii’s technology, but we also see key points of alignment in terms of utilizing the Nexii technology in some of our own developments.”

To date, the Dombowsky brothers have built six buildings made from Nexiite and the Nexii building process. A pilot project is now planned for B.C.

“The Nexiite is a proprietary blend of materials that, mixed with sand and water, creates a material that has a number of very unique properties,” Sidwell said. “It is light-weight and stronger than concrete, the same density as granite, can be stronger than a steel stud.”

Floors, walls and ceilings are built in a factory and then shipped to the construction site, where the components are bolted together.

“We’ve had to go through extensive testing," Sidwell said. "Now we’re confident and satisfied that we can pass any building code requirements, and therefore we’re now into full-scale commercialization.”

The company is focusing on multi-family, mid-rise, commercial and industrial buildings.

“We can do single-family homes, but that is not our focus right now,” Sidwell said.

Posted on November 7, 2019 in Most Popular Articles, Housing & Construction