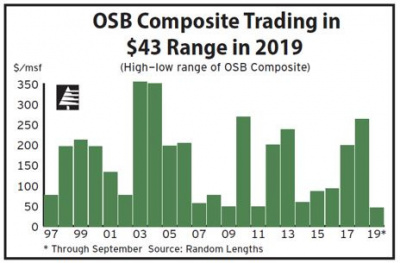 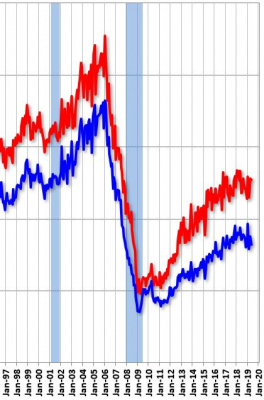 Despite its reputation for being one of the most volatile commodity wood products, OSB is on pace to record the smallest trading range in its history.

Single-family housing is the dominant user of OSB, and that market has been relatively flat for most of 2019. To get a feel for the effect of single family starts on the commodity price of OSB see the graph immediately below the OSB Composite Price by Random Lengths above. Through August, actual single-family starts trail the same period of 2018 by 2.7%.

Traders say production curtailments are needed to jolt OSB out of its malaise. Two indefinite mill shutdowns were announced in Western Canada in late July and August when LP and Norbord announced plans to close mills in Peace Valley and 100 Mile House, B.C., respectively. Some say the full effect of those closures has yet to be felt, although production from the South is shipping farther north to supplement those markets. 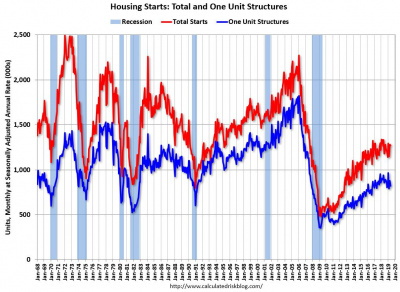 Buyers have hesitated to increase purchasing with supplies readily available. “Why invest if you don’t perceive any upside?” said one buyer in the South.

Matt Layman of Layman’s Lumber Guide says the following about the OSB market: “Despite low prices and thinning mill profitability, the seasonal down trend is being manifested. We haven't seen sub $125 in over a decade but the new low cost facilities in the southwest along with declining log prices make that a 2019 possibility. Those rock bottom numbers tend to linger rather than snap back. That is why positions are longer term investments. Buy 7/16 $150 or lower, basis LLG print. Double down at $125 fob mill print.” As commentary for the graph below, Matt provides an OSB forecast where the blue squares are the actual price of OSB and the black are Matt’s forecast based on a proprietary algorithm.