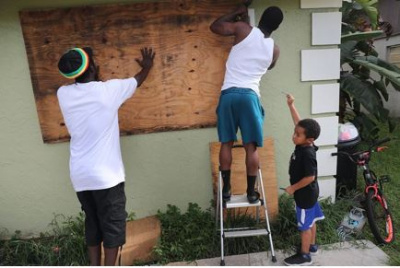 A family prepares their home with plywood as a safeguard against Hurricane Dorian before it approached Florida. U.S. plywood producers now allege in a lawsuit that plywood imported from Brazil is falsely certified as being safe. (Joe Raedle/Getty Images)

U.S. plywood producers claim a competing product from Brazil has a high risk of failure in major hurricanes, but consumers can’t tell because the imported wood is falsely certified as structurally sound.

In a lawsuit filed in U.S. District Court in Fort Lauderdale, the companies allege that since 2016, two American inspection firms and an accreditation agency failed to perform their “quality control functions” when millions of square feet of plywood was imported into the U.S. Much of it arrived through Florida ports, including Broward County’s Port Everglades.

“As a result, U.S. residents who live or work in buildings constructed with off-grade Brazilian plywood are exposed to significant risk of serious injury or death, particularly in the event of a hurricane or significant earthquake,” the suit alleges.

In a telephone interview, plaintiff attorney Michael Haglund, of Portland, Ore., said Friday that some of the plywood in question was used to help with rebuilding in Puerto Rico after Hurricane Maria.

“The really unfortunate fact is that it is being passed off as structural plywood when it can’t meet that standard,” he said.

The suit was filed by a group of 10 plywood producers in the South and Pacific Northwest against inspection services PFS-TECO of Wisconsin and Timber Products Inspection Inc. of Georgia. A third defendant named in the suit is International Accreditation Service of California, which is the accrediting service for the two inspection firms.

“We have reviewed the allegations of the complaint and believe that they are both misleading and totally without legal merit,” Moore said by email. “Timber Products will defend itself vigorously in court and is confident that the facts will show that its conduct and practices were in all respects consistent with its responsibilities and the standards applicable to this industry.”

Moore said he would offer a more detailed response to the allegations in the coming days.

PFS-TECO of Wisconsin said in a Sept. 10 statement that although it had yet to be served with the lawsuit, it denies the allegations outlined in a press release issued by the U.S. plywood producers.

“We intend to vigorously defend our reputation and look forward to doing so in due course,” the company said.

PFS-TECO said it “stands by its independent certification procedures as fully compliant with the relevant standards.” It said it has no relationship with Timber Products Inspection.

PFS-TECO questioned the testing approach used by the U.S. producers on the Brazilian plywood, saying it is “not consistent” with test requirements.

And it said it has more than 15 years of data showing the plywood from southern Brazil and produced by manufacturing facilities certified by the company “can meet” American testing requirements.

The California accrediting firm could not be reached for comment despite a telephone message.

The suit alleges that dating to Jan. 1, 2016, the inspection services “made false statements of fact through certifications that authorized 35 Brazilian plywood producers to export plywood into Florida" they either knew or should have known "did not meet” a voluntary industry standard.

The lawsuit said tests conducted by the American Plywood Association “showed that the Brazilian plywood panels produced in southern Brazil experience massive failure rates with respect to the stringent properties” of the standard, “specifically bending stiffness and deflection.”

The suit alleges that the Brazilian plywood mills source all of their veneer from fast-growing plantations of loblolly and slash pine. These species are native to North America. But both species grow so fast in southern Brazil that the wood density is not sufficient to reliably produce structural grade plywood.

In the complaint, the U.S. producers allege that 30 companies operating 35 plywood plants in Brazil “are falsely stamping millions of square feet of structural plywood panels imported into the United States” as meeting American standards.

The American producers, who also allege in their complaint that Brazilian plywood is driving down the prices and quality of plywood on the U.S. market, said they had a nonprofit lab in Washington state start testing samples of the imported plywood in 2017.

The U.S. producers’ suit, which alleges false advertising and negligence on the part of the inspection services, is seeking $300 million in damages and wants the court to direct PFS-TECO and TPI to “immediately revoke” the Brazilians’ licenses to make structural plywood.