OSHA Steps Up Use of Drones for Inspections

OSHA is stepping up its use of drones to inspect worksites. As it does so, the practice places employers in an uncomfortable position between the proverbial rock and a hard place.

Should you give OSHA permission to use drones on your property not knowing what they will find, or withhold consent and look like you have something to hide? 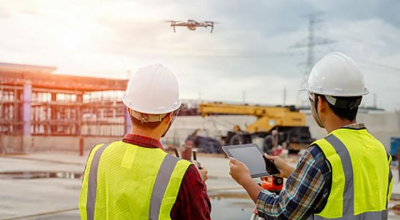 We first reported on the practice when the news surfaced late last year that the agency had put procedures in place for the use of these unmanned craft as another tool in the inspection process. OSHA reportedly used drones with cameras to conduct at least nine inspections of employer facilities in 2018, and has conducted an additional nine such inspections so far this year.

As of now, OSHA has used drones only with employers’ permission, at worksites where an accident occurred and the area was considered too dangerous for inspectors to enter (such as collapsed buildings, chemical fires and oil rigs).

We can expect greater use of drones for this purpose in the future, according to Wes Gerrie, an attorney with the law firm of Goldberg Segalla LLP. “With the increased prevalence of drones in day-to-day life, one can only expect that number to increase.”

Currently, it is up to the OSHA regional administrators to determine whether their region will act to institute a drone compliance inspection program. Any region wishing to do so must establish a regional drone program manager and organize a drone inspection team consisting of a remote pilot in command, visual observer and a safety monitor.

The visual observer must be an OSHA employee and the pilot makes all flight determinations. The program must also comply with all Federal Aviation Administration (FAA) regulations, including strict registration, certification and reporting. Finally, the pilot must always maintain line-of-sight with the drone and the team must notify all people on-site before a flight.

One of the most obvious tensions created by these procedures arises when an OSHA drone inspection runs up against a business’s protections against unauthorized searches, Gerrie points out. “While such an issue will likely be heavily litigated in the future, OSHA currently requires employer’s consent before conducting a drone compliance inspection.”

OSHA currently is seeking a blanket public certificate of waiver/authorization from the FAA to use drones anywhere in the country without requiring consent, Gerrie reports. But at present, the agency can only conduct a drone compliance inspection with the consent of the employer, keeping some control within the hands of the business entity subject to the inspection.

At this time, if an employer consents to drone inspections by OSHA, it should continually monitor the drone flight, and make sure that compliance takes place in regard to both the FAA and OSHA’s own policies and regulations, and that the consented-to flight plan is consistently adhered to.

“Notably, an employer can refuse such an inspection,” Gerrie says. “However, as a practical matter, it may create the appearance of impropriety and such a decision should be considered carefully.”

If you are approached by OSHA regarding a potential drone inspection, Gerrie stresses that it is important to consider these points:

Given these considerations, Gerrie suggests that the conventional approach of simply allowing OSHA to inspect a site may be turned on its head in favor of an employer requesting that OSHA provide a warrant first.

Posted on September 10, 2019 in Housing & Construction