Extreme winters that evoke descriptors like “snowpocalypse” and “Chiberia.” Pummeling heat throughout the summer. Unrelenting wind and rain marking the calendar points where we used to experience spring and fall. Climate change is affecting life throughout Chicagoland and around the world. 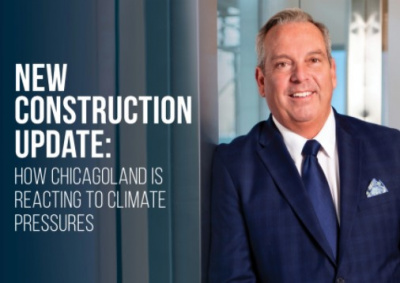 Still, the region has not seen large-scale, dramatic catastrophes such as the fierce hurricanes along the East Coast or wildfires like those that swept through parts of California last year. Lakeshore erosion and more frequent flooding on waterways like the Des Plaines River are alarming but have not generated the same sense of urgency. Mario Greco, founder of The MG Group at Berkshire Hathaway HomeServices Chicago, said that’s part of the reason why the Midwest is behind other parts of the country in terms of confronting the effects of climate change.

“That doesn’t really seem to affect people,” Greco said. “There’s erosion along the lake. Beaches are disappearing. But that doesn’t really move people in the Midwest. I think Midwestern people are practical. They would rather spend less for gain now than spend more for gain later.”

But still, shifts in the public perception of the planet are impacting the new construction world in Chicagoland. For some, the solution involves environmentally sound green homes that utilize sustainable materials in their construction to help mitigate the human impact in the environment. But also, the concept of resilience has also become part of the conversation as homebuyers seek out buildings designed to withstand the stresses of environmental change.

Green homes are nothing new. The U.S. Green Building Council was established in 1993 by more than 60 architectural firms and nonprofit groups that sought to develop a rating system for eco-friendly buildings. Their goal was to create better buildings with people and nature in mind. The Leadership in Energy and Environmental Design, or LEED, building certification program evolved through the council to verify that a structure met certain metrics in terms of energy efficiency, water usage and the utilization of renewable or recycled construction materials.

In the nearly three decades the organization has been around, the conversation has moved beyond the basics. Wellness considerations are also a factor and are becoming a bigger part of the equation for people who want green homes.

“Efficiency is a hot topic, and that’s something that helps homes improve their performance and also can lead to financial savings,” said USGBC West North Central Regional Director Sheri Brezinka. “I think one of the biggest trends that we’re seeing and that we’re really hoping it’s going to gain more traction is the emphasis on personal health and well-being. I think people are really starting to understand the impact of LEED on what we call indoor environmental quality.”

Structures such as schools, municipal buildings and even grocery stores can be built according to LEED standards. Builders are also approaching new-home construction with those guidelines in mind, as evidence of climate change and higher costs associated with traditional building practices pile up.

The Chicagoland region has long been one of the top markets for LEED certification, according to Brezinka. The majority of those certifications are granted to commercial buildings, but there also has been an increase in homeowners seeking the status.

“Because people are familiar with the certification, it really does set a mark for showcasing that a LEED building is a more sustainable, high-performing building,” Brezinka said, noting that the number of homes with LEED certification has jumped by 19 percent nationally since 2017. “That’s an all-time high. So, we’re excited to see the residential market is starting to uptick not only in Chicago, but across the country.”

USGBC’s “LEED in Motion: Residential” report, released last summer, states that there are more than 400,000 LEED-certified housing units in the United States out of nearly 500,000 worldwide. Illinois had 2,408 LEED-certified residential units at the time of the report, which ranked the state 19th in the U.S. But in terms of its square footage of green projects completed per person in 2019, Illinois came in second in the nation at 3.95 gross square feet per capita, according to the USGBC. That figure encompasses 121 total projects and includes commercial structures.

John Goldsworthy has had a front-row seat in this recent expansion of LEED-certified residential space in Chicago. The broker and manager of development sales and marketing at @properties works with builders who put up sustainable and resilient structures, as well as renovate existing buildings to make them more environmentally friendly. He represents the developers of the 1000M condo building that’s going up at 1000 S. Michigan Ave. in Chicago’s South Loop. That project is being developed with LEED certification in mind. Features designed to lessen the 74-story tower’s impact on the environment include the use of core building materials that are sourced from within a 500-mile radius and those that contain high levels of recycled materials.

“The overall goal is to try and diminish or avoid sending a large stream of damaged or used material to landfills,” Goldsworthy said. “It’s about switching the mindset from cheap and short term to items and building materials that are worth a bit more in the long run.”

Climate change poses major questions for builders. What sorts of problems will their buildings face? For people in coastal areas, rising water levels and storm intensity immediately come to mind. Chicagoland’s proximity to Lake Michigan and rivers such as the Chicago and Fox make it vulnerable to similar threats. The region also faces the threat of more precipitation, hotter temperatures and increased humidity, according to Openlands, a conservation organization based in the region. Higher temperatures are not only uncomfortable but also expected to contribute to more intense storms.

Greco believes municipalities in the Midwest need to respond to climate change by making it easier for builders and homeowners to utilize environmentally friendly features.

“Cities like Chicago need to make the permitting process for — for example — geothermal heating and cooling, solar panels, and other green features, easier, more streamlined and more public,” Greco said, adding that homeowners who act now will be able to reap the rewards sooner than they may think. “What people need to keep in mind is that things are changing pretty quickly. If you can get ahead of the curve by putting some green features in your home, maybe in the next five or 10 years when I think it’s going to be a much more urgent matter, you might be able to come out ahead when you’re selling your home.”

Resilience construction takes some of the same principles from green construction standards and applies them to the practice of designing and constructing buildings that can withstand the environmental stresses of climate change. Stronger materials, innovative building techniques and a tighter building envelope are all major elements in resilience construction. Homes elevated on stilts in coastal areas could be considered examples of resilient construction, as they are designed in response to the looming threat presented by weather events like hurricanes.

Brezinka said that resilience construction often makes use of durable materials. Site selection is part of the process, including considerations such as orienting the building to withstand wind or make use of the sun in lighting. Rainwater collection, energy efficiency, and site renewal and regeneration — practices that restore natural elements such as coastal marshes that can absorb some of the effects of extreme weather — are also elements of resilience construction.

Thankfully, the twin concepts of sustainability and resilience work together. “All of these strategies that are used in green buildings and homes are also strategies that contribute to helping people to prepare for severe events and to recover from those events that do happen,” Brezinka said. “We see that green [construction] as a cornerstone of resilience. I think that people are really starting to recognize that sustainability is more than just reducing our impact on the environment. Way back when we started with LEED, it was really about reducing environmental impact. But as years have gone on, we’re looking at creating homes and buildings that are designed to help support us if there are severe events that happen.”

Goldsworthy pointed to the 1000M building as an example of a new structure that incorporates resilient elements in response to climate change scenarios that are likely to affect the Great Lakes region. Its features include a green roof and storage tanks designed to hold runoff from severe rainstorms so that it can be released gradually, without taxing the city’s sewer system.

“We’ve converted our roof surface area to a green roof,” Goldsworthy said, adding that sky-high gardens also lower the temperature of the tops of buildings. “We see that trend growing as the city is requiring that more and more to keep the thermal envelope down. Water retention and storage are becoming a big issue with our outdated or antiquated sewer systems in the city.”

Misconceptions regarding green homes persist. Brezinka finds that people often think a green or resilient home is more expensive to build, that green materials are hard to find or that such structures are too costly to maintain. Agents who want to sell green homes should be prepared to discuss long-term benefits that outweigh the price premium on LEED-certified units.

Brezinka noted that while green building materials and certifications might cost more at the outset, that initial outlay is recouped in the form of lower energy bills and higher resale value.

“Certified homes undergo inspections; there’s detailed documentation, reviews, they’re performance tested, so they’ve been proven to make sure that they’ve been built in a way that can protect the health and safety of the homeowner,” she said. “There are so many key benefits that the homeowners should be aware of, like the savings through energy-efficient measures and water that can not only help the environment but can lead to more affordable utility bills.”

Greco said agents need to be prepared to communicate the value proposition that goes along with green features to their clients, both the more obvious payoffs and the subtler ones.

“Sometimes the savings aren’t immediate,” Greco said. “In the long run, I think green features are not only going to keep their value, but actually make properties easier to sell. I think environmental and climate change concerns are going to be growing exponentially in the next few years.”