Mike and Dylan Hoven both started their careers with Grizzly Truss Fabricators the same way: catching wood from the saw. Apparently that’s how members of the family are initiated into a Bemidji business that was started 48 years ago by Jerry Hoven, Mike’s father and Dylan’s grandfather. 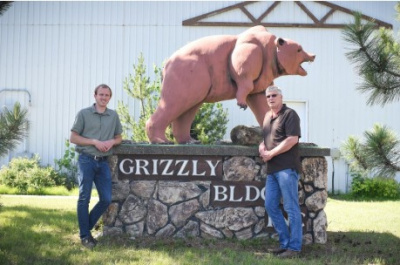 Mike and Dylan Hoven are a father-son duo who both got their starts as youngsters at Grizzly Truss, located in Bemidji’s Industrial Park. The company was started in 1972 by Mike's father, Jerry Hoven. (Jillian Gandsey / Bemidji Pioneer)

Mike, 56, was only 12 years old when he started working at Grizzly Truss in the Bemidji Industrial Park.

Dylan, 27, hung out at the business as a teenager, but says he only worked as a catcher on the saw when he needed some spending money.

Today, the father-son team leads a business that has expanded from a truss company, adding wall panels and a retail lumber yard to the fold. It employs as many as 30 in the summer months, and 12-15 year-round.

“A lot of people still think of us as just a truss plant,” Dylan said. “They don’t even know what a wall panel plant is and what it has to offer. I think a lot of them are just thinking we’re still wholesale, so they’re not a whole lot coming through our door. That’s part of the controlled growth.”

When Jerry Hoven started the business in 1972, Grizzly Truss was a pole barn manufacturer. After a few years, he realized the area needed a plant that could build trusses, so the company went in that direction. 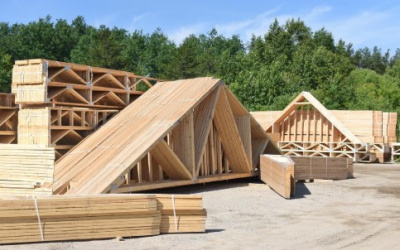 “The truss plants back then were far away, and to get trusses for the pole barns was difficult,” Mike said. “So they started building their own. I remember the first press we had, you couldn’t even call it a press. It was a slab of concrete, like a 600-pound weight on a big beam. They’d wench this weight up and then release it, and it just slammed the plates. That’s how they did them back then.”

Grizzly Truss left the Hovens for a few years after Jerry sold it, but Mike brought it back into the family in 1990 after spending some time away.

“I wasn’t sure it was something I wanted to do for the rest of my life,” Mike said. “I owned other businesses. When I was getting married, this place was up for sale and I nabbed it. I was very excited to get back into it.”

Technology has impacted many industries, and Grizzly Truss is no exception.

“We now have computerized saws, we have lasers, we have stackers,” Mike said. “We’ve gone as automated as you can, maybe you could go one step further, although they are coming out with robots now.” 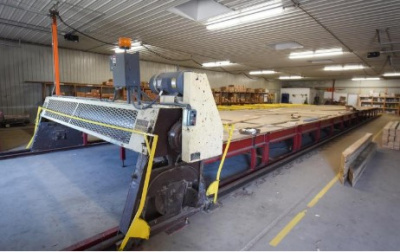 Larger trusses are built here by Grizzly Truss employees. The business employs as many as 30 people in the summer months, and 12-15 year-round. (Jillian Gandsey / Bemidji Pioneer)

That technology has allowed the company to adapt to more complex construction jobs.

“In the 1970s and ’80s they didn’t have the computer programs like they have today,” Mike said. “Houses were pretty simple. The pitches were pretty shallow. A hip-set back then was a more complicated roof. Today I can do a job that has 100 different setups in it for one house. Back then you would look up the joints and the cutting on microfiche and make a copy of it.

"Now I do it all right here on the computer. I just click and drag it and send it out to the saw, and send it out to the press. Builders can come in and we can design together. Since we opened the lumber yard that has made things easier. The contractors will come in and we can go over it, and make the changes here, which saves them a lot of time, and us a lot of headache.”

Dylan says he is excited about the company’s future.

“I don’t see a cap,” Dylan said, “because there’s always innovation and we’ll always have that truss plant and wall panel plant behind that lumber yard. That’s what is getting people through the door. That one-on-one sit down with the design type of thing. The windows, the doors and lumber yard materials just will follow that. That’s the niche we feel we have to get people through the door.”

Mike Hoven smiles as he listens to his son talk about the future. He thinks about what Jerry Hoven started nearly 50 years ago, and how happy the founder would be.

“He would be extremely proud,” Mike said.