NFC’s Tatge Explains Why He Became a Turnkey Framer

Chris Tatge started in the framing business as a teenager, helping his youth pastor who was general contracting his own home. By 21, he was signing his first contract to frame 26 houses over the course of a year, bringing on two employees to assist with the process. 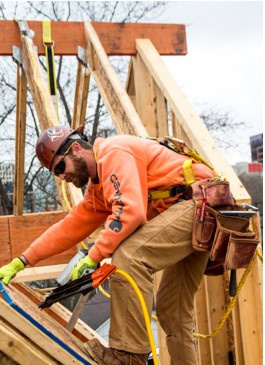 “To be fair, I had no idea what I was doing,” he laughs, saying that a set of stairs that takes him four hours to build today would set him back for two days. “But to be fair, in the framing industry, that’s how most of us learn.”

Chris spent around 20 years of his framing career rallying for a seat at the table with component manufacturers (CMs) and lumberyards, wanting to become involved with their decisions regarding pre-construction planning and material selection processes.

“I gave a presentation at BCMC two years ago, and the thing that struck everybody in the crowd was, I said: ‘If you think sequencing floor trusses in a factory is difficult, then try doing it in a foot of mud’. As a framer, and as a labor-only framer, [for] the amount of time that it takes to produce a building...if there are things in place that are set up for me to be successful, I can make 100% more profit on a job if all the preconstruction planning works in my favor,” he says.

Chris recalls offering to go out to a CM’s yard, and even arrange and band all the materials, just as long as he was promised a dry surface to work on. However, Chris says nobody was particularly fond of taking time to give him those considerations.

Now co-owner of Dynamic Construction in Stoughton, WI, and executive director of the National Framers Council (NFC), Chris says he simplifies jobs for his framers, and produces more revenue for the CMs he works with, by utilizing a more non-traditional framer business model.

Today, Chris supplies the materials for a job, obtains the trusses directly, and provides the framing labor—it’s an approach most framers, including himself, are unfamiliar with, and one he says he didn’t understand until joining the NFC.

“I’m willing to pay the CM what he needs to do the things I’m asking for, so he’s getting extra revenue. I am also streamlining the process for my framers so that they’re more successful in the field,” Chris explains.

“As a turnkey framing contractor, I’m doing all those things that I would be doing anyway. I’m making a margin on the material, I’m serving my subcontractor better, and they’re getting more value on their install. So it just makes more sense for everyone.”

You can hear more on Chris’ history in the business, his advice for CMs and his experience with the National Framers Council by tuning into his interview on SBCA’s Component Connection.