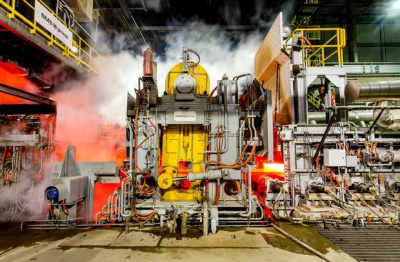 A Big River Steel caster, part of the advanced equipment U.S. Steel is gaining ownership of as it completes its acquisition of Big River.

United States Steel Corp. X 13.26% has agreed to acquire the remaining 50.1% stake in Big River Steel LLC for $774 million, giving the steelmaker ownership of one of the newest, most advanced steel mills in the country.

Ownership of Big River’s Osceola, Ark., mill will give U.S. Steel X 13.26% access to the same production process used by competitors Nucor Corp. and Steel Dynamics Inc., two of the most profitable companies in the domestic steel industry. The company has said the acquisition is the centerpiece of its drive to raise profit by investing in electric furnaces that melt scrap, which are known in the steel industry as minimills.

U.S. Steel bought a 49.9% stake in Big River in October 2019 for $700 million with an option to acquire the rest of the company within four years. Higher steel prices in recent months have helped U.S. Steel raise enough cash to complete the purchase sooner than expected, a person familiar with the matter said.

The spot-market price for coiled sheet steel in the U.S. has rallied to $856 a ton on Monday from below $500 a ton this summer, as a rebounding manufacturing sector ramps up orders. “The timing is just right for us,” U.S. Steel Chief Executive David Burritt said during a conference call Tuesday.

More than two-thirds of the steel produced in the U.S. is now made in electric furnaces. But U.S. Steel still mostly makes its steel from iron ore melted in giant blast furnaces fueled by coal. It is a more expensive, labor-intensive process that is difficult to throttle back when demand for steel wanes as it did this spring when the coronavirus pandemic caused the company to idle about half its blast furnaces and lay off hundreds of workers. U.S. Steel has restarted most of those furnaces.

Electric furnaces are easier to turn up or down and require fewer workers to operate them. As a result, they are able to operate profitably even when steel prices are low.

“When bad things happen, like the pandemic this year, minimills are able to manage through that better,” Mr. Burritt said in an interview.

U.S. Steel expects to close on the purchase early next year.

Big River, which opened in 2017, is capable of producing 3.3 million tons of steel annually. That is more than the raw steel capacity of U.S. Steel’s huge Mon Valley Works near Pittsburgh.

Big River was started by steel-industry entrepreneur David Stickler, who assembled investors—including a unit of Koch Industries, the Arkansas schoolteachers’ pension fund and private-equity firms—about seven years ago to build the first phase of the mill for about $1.3 billion.

Big River’s location in northeast Arkansas along the Mississippi River will give U.S. Steel an improved geographic reach for customers in the southern U.S. and northern Mexico, which is shaping up as a key battleground market for U.S. steel producers. U.S. Steel said it expects to be able to deploy its research in specialized steel varieties, particularly for the automotive industry, at Big River’s lower-cost production facilities.

U.S. Steel has reported losses in recent quarters largely as a result of falling steel prices and lower demand from major customers, including auto and appliance makers. The company was forced to delay plans for upgrading and replacing equipment at some mills to conserve cash.