Construction software company HoloBuilder Inc. has announced a partnership with Boston Dynamics, maker of mobile robots, to develop SpotWalk, which the firm claims is a first-of-its-kind robotic document capture app for construction sites. 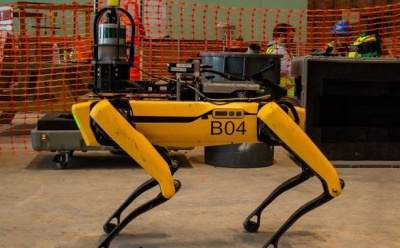 The SpotWalk app has two modes: One teaches Spot the reality capture route for a site by commanding the robot dog through a smartphone interface and the other makes Spot repeat that route on its own, taking pictures along the way.

The use of reality capture can ensure that all stakeholders are on the same page when it comes to a project’s progression; however, when a person does that work, the task is usually done, once per week on average, according to Harry Handorf, HoloBuilder’s head of marketing.

On the other hand, Spot can capture images on the site much more frequently than a human. Handorf predicts HoloBuilder clients will use the app twice a day because the robot can take photos without using a worker to do the task.

Spot the canine robot is a viral sensation — performing tasks and even dancing in YouTube videos. With SpotWalk’s launch, HoloBuilder is introducing an early adopter program, Handorf said, in which program customers will receive two Spot robots and two SpotWalk licenses.

HoloBuilder is looking for customers who can provide feedback on the new app so it can developed further, he said.