Huber on How to Help Prevent Squeaky Floors with Stiff Subflooring 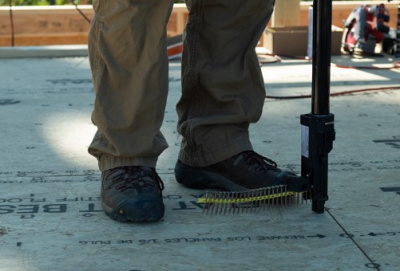 In engineering, deflection refers to how much a structural element will bend from its original positioning when a load is applied to the element. More specifically, for home subfloors, it indicates how much bounce or sag the floor endures under the weight of people or furniture. That movement can result in squeaks and, with too much movement, could eventually cause damage to certain types of floor finishes.

Why is Reducing Deflection Important?

Floor squeaks, a headache and nuisance for homeowners, are often cited as a major source of callbacks for builders, negatively impacting both their schedules and budgets. Mike Pyle, an engineer and the Director of Technical Services at Huber Engineered Woods, advises builders to consider the subfloor assembly of the home as highly important.

“You get one chance during construction to get your subflooring right.” – Mike Pyle, engineer and Director of Technical Services at Huber Engineered Woods

“There is no easy way to swap a subfloor out,” Pyle said. “You can upgrade lighting, plumbing and finish flooring down the line, but you get one chance during construction to get your subflooring right.”

Poor subfloor performance may be felt right away during construction, or later by the homeowners. Over time, buildings can settle, and wood subfloor components may be impacted by seasonal changes in moisture levels, so a low-quality subfloor may produce more movement and squeaks. To minimize deflection in the floor, aim to build a stiffer subfloor assembly.

Where and Why Floors Deflect

The subfloor will move most when people walk on the panels in the space between the trusses or the joists or in the middle of a joist at long spans. A sub-par subfloor assembly may begin with the material used for the floor frame. The most common options for the frame of the floor include the following: 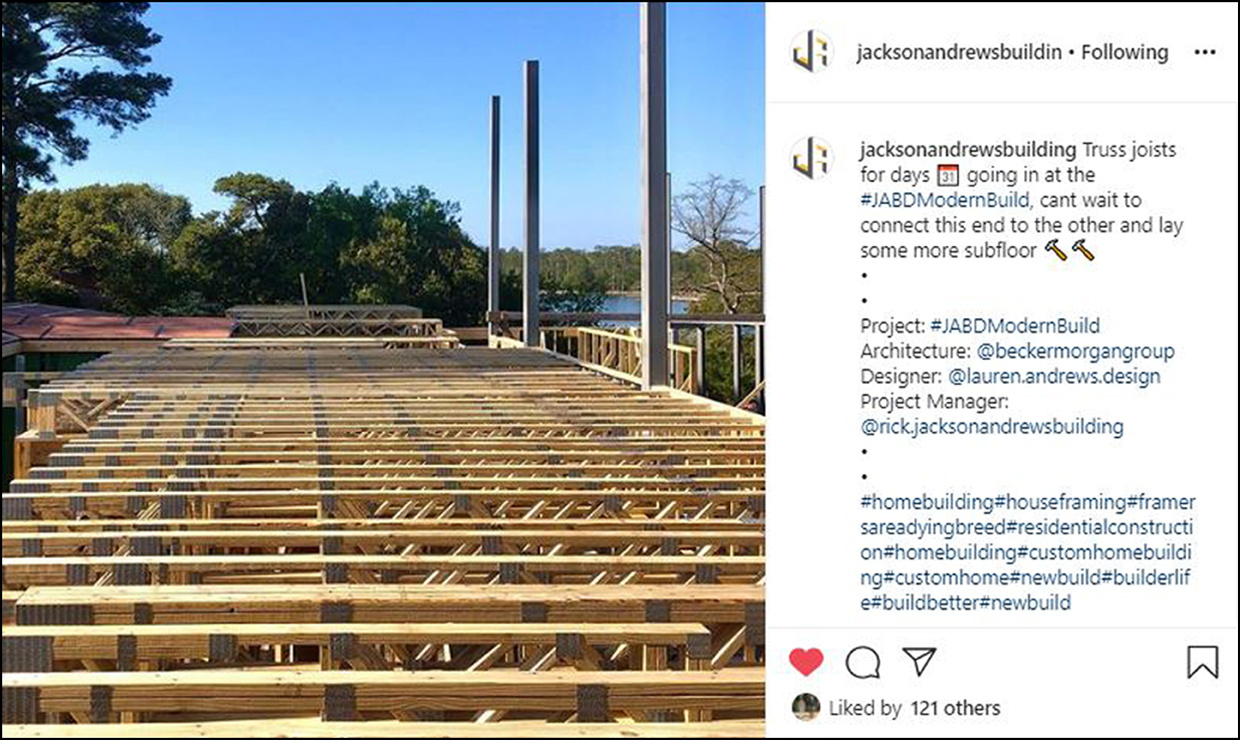 A truss subfloor frame on the second floor of a home. Photo Credit: @jacksonandrewsbuilding

How to Increase Subfloor Stiffness and Decrease Deflection

A stiff subfloor assembly decreases deflection and can help minimize the possibility of future squeaks.

Here, material selection matters. Subflooring panels, placed on top of the framing, vary in quality and performance. A commodity [OSB or plywood] product, for example, may be more vulnerable to moisture damage in wet climates than a premium product. This moisture damage could cause panel edges to swell, creating an uneven surface that holds the potential for deflection – and additional time on the schedule for sanding – down the line. Conversely, the increased wood density, tongue and groove engineering, and moisture resistant resins in a premium product all work together to increase the strength and stiffness of the panel, giving overall floor stiffness a helpful boost. 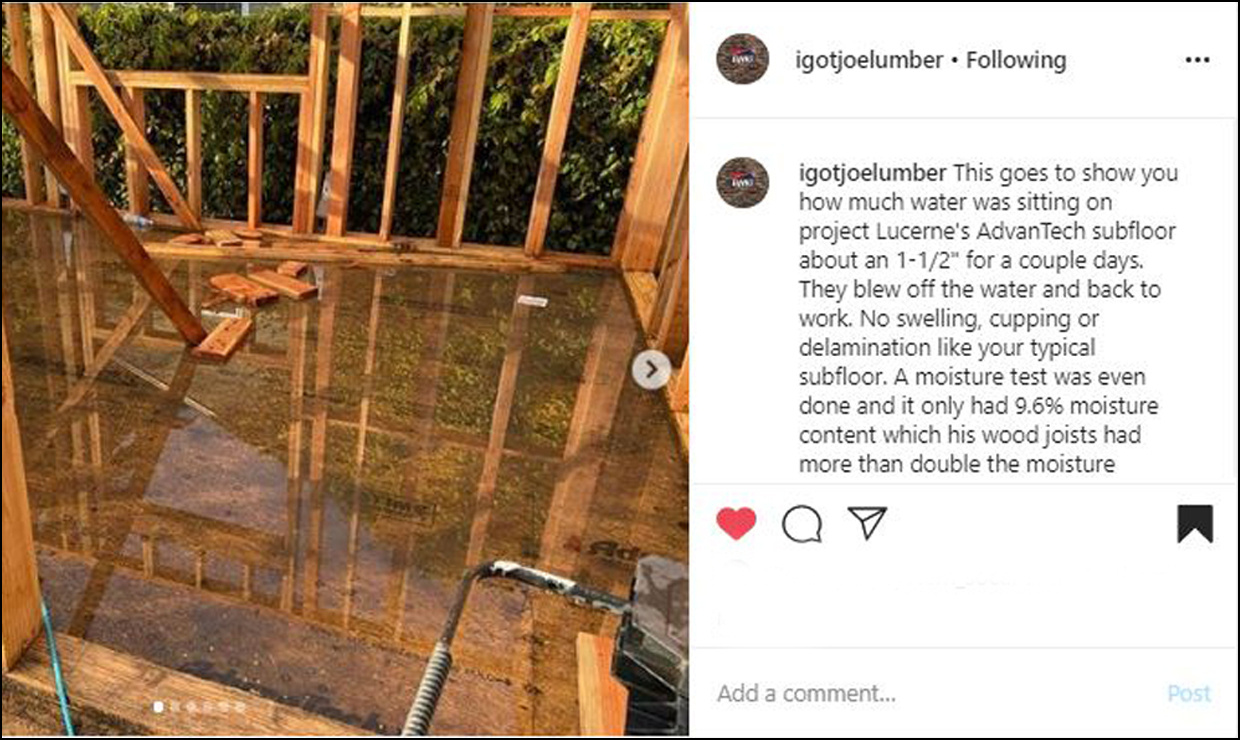 Use Subfloor Adhesive to Bond Panels and Joists

Another major component of a stiff subfloor is applying glue, also known as subfloor adhesive, between the subflooring panels and the joists. According to Pyle, glue is what takes your subfloor from separate, manually joined parts to one solid (and therefore more stiff) assembly. The subfloor adhesive fills in the gaps from natural variations in the wood products and bonds the subflooring panel to the truss or joist. The phenomenon of making the joist and subfloor act as one piece is known as composite action. 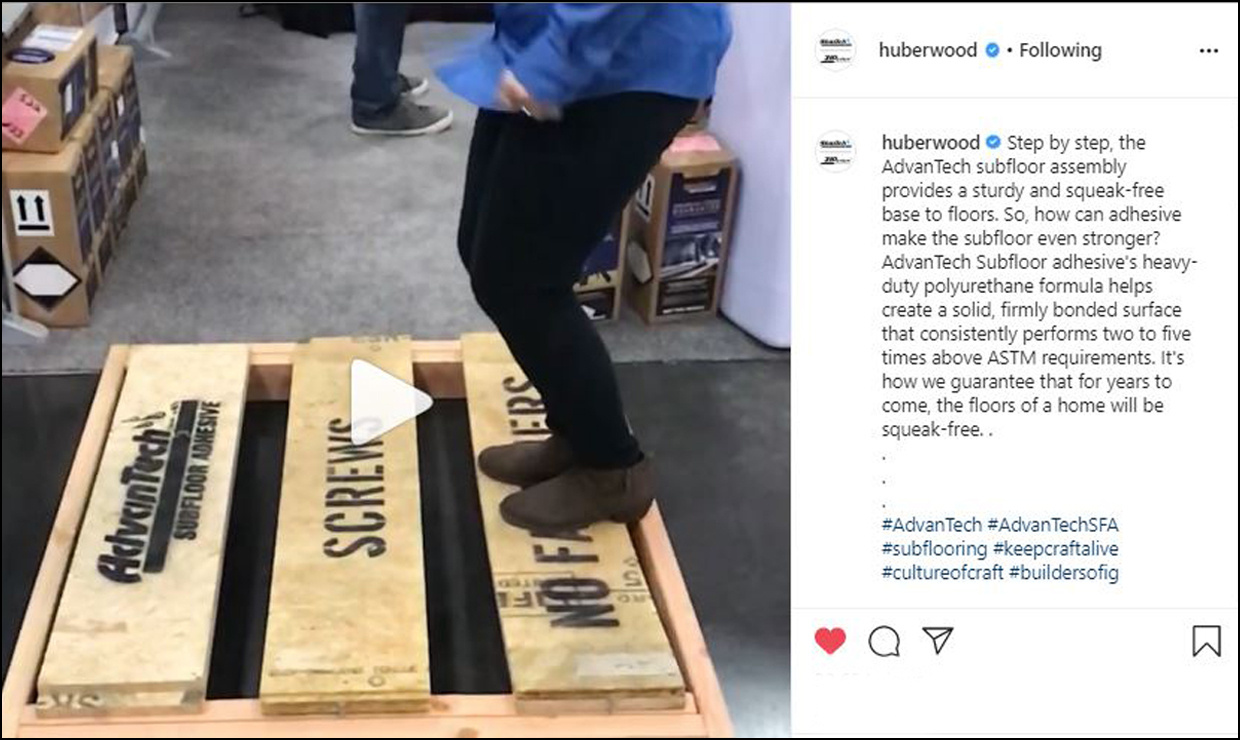 Watch a demonstration of the effects of composite action.

“Composite action basically significantly reduces the possibility of squeaks,” Pyle said. “It makes the joist stiffer because it’s not just relying on itself but working together with the subfloor [panel] like a T-beam. The entire floor sags less.”

To achieve stiffness through composite action, Pyle says its critical to apply a sufficient and consistent amount of subfloor adhesive across the entire length of the joist. 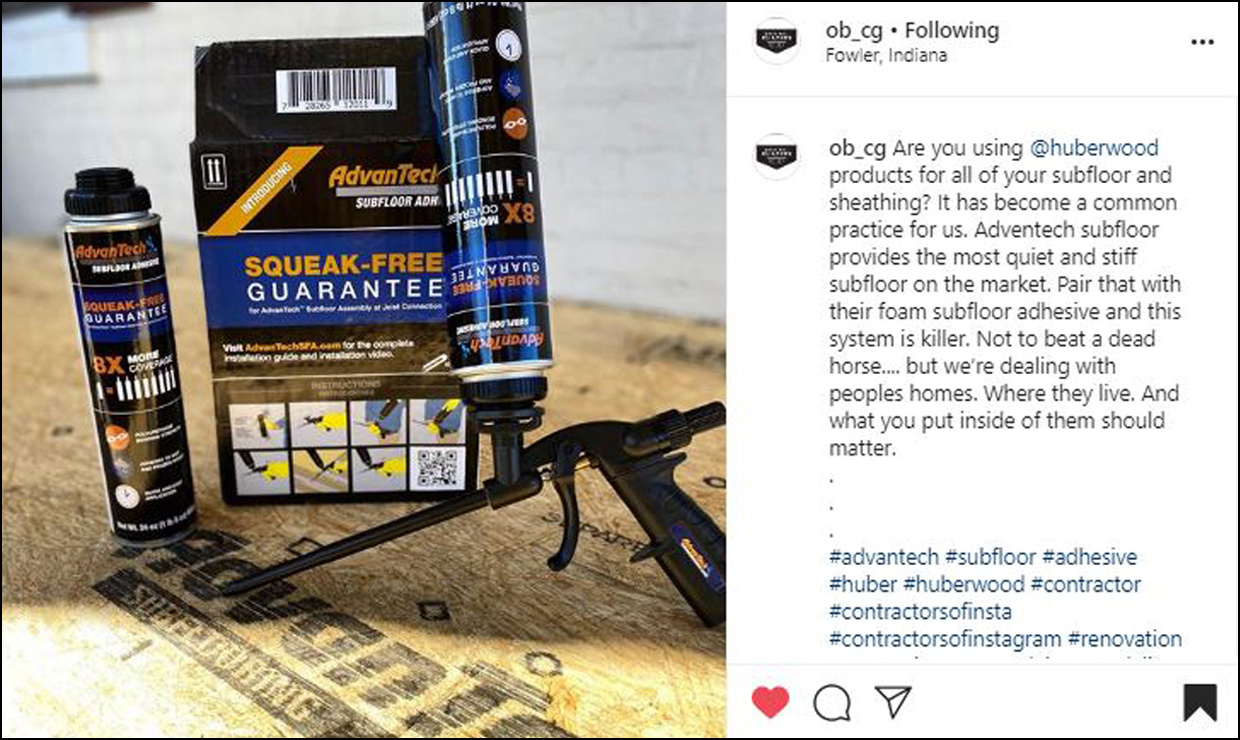 Builders can choose from nails, screws or certain proprietary type fasteners to fasten the subfloor panel to the joist. Common nails with a basic head and smooth shank, should be avoided to minimize the chance of squeaks.

Pyle compares these nails to arrows: it goes in, embeds in the wood fibers and resists being pulled out, limiting any subsequent movement.

While nails lock a panel into place, screws draw the panel and joist together. If there is natural variation in the joist, nails will leave little gaps between the panel and joist. Screws will pull the two together, minimizing the gap, and lock it, nearly eliminating the potential for further detectable movement. 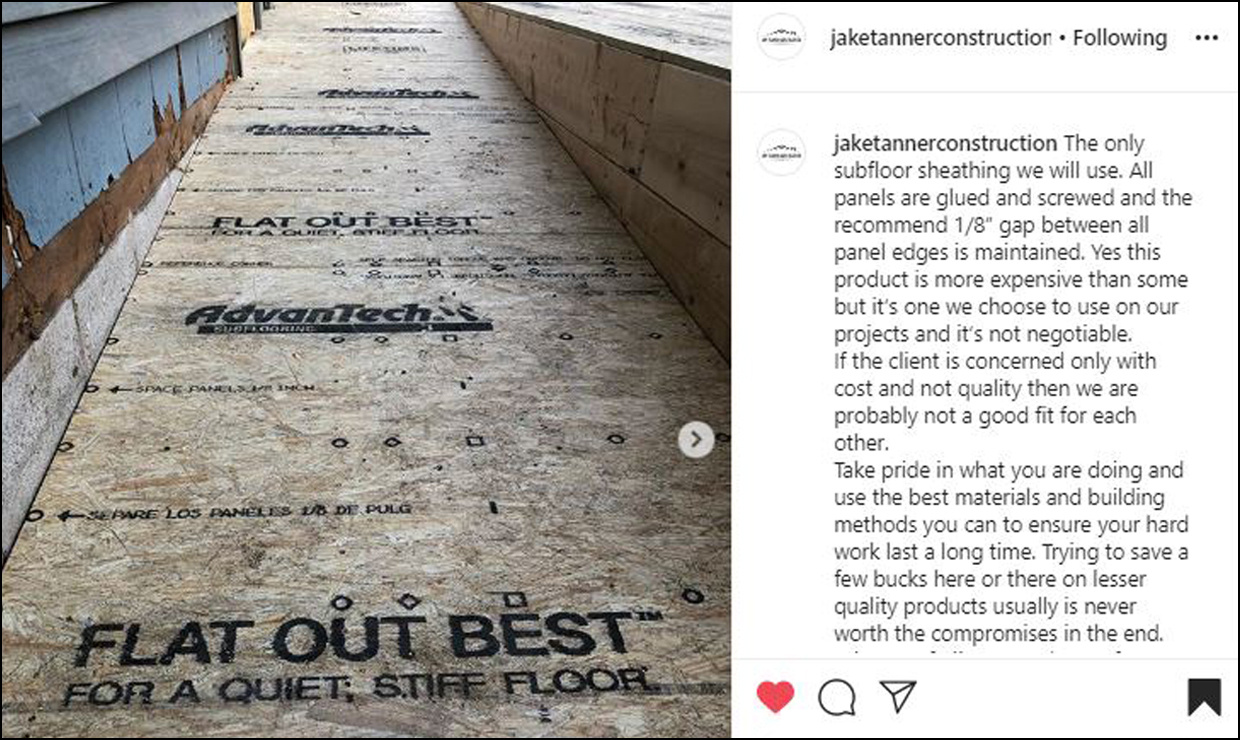 “Glued and screwed” is a common method builders use to get a stiff subfloor assembly. Photo Credit: @jaketannerconstruction

Nails are the faster option, and with engineered joists and panels, Pyle says you can still get a great install with a ring shank nail. However, screws can help make up for any surface imperfections in the framing, offering a more consistently quiet, stiff subflooring install from project to project.

Is Your Floor Built to Last?

For homeowners and builders alike, it can be tempting to deprioritize subflooring materials because, after construction, you don’t see the subfloor assembly. According to Pyle, that line of thinking is a mistake because, while it is invisible, the subfloor is extremely functional and cannot be easily traded out later. Although we don’t think about it, subfloor panels get used every day for the life of the structure.

Especially if the home has premium finishes, such as hardwood floors or porcelain tile, the subfloor below impacts how well the (often expensive) finished floor performs, and whether it’s subjected to unwanted movement.

“The subfloor is the unsung hero.” 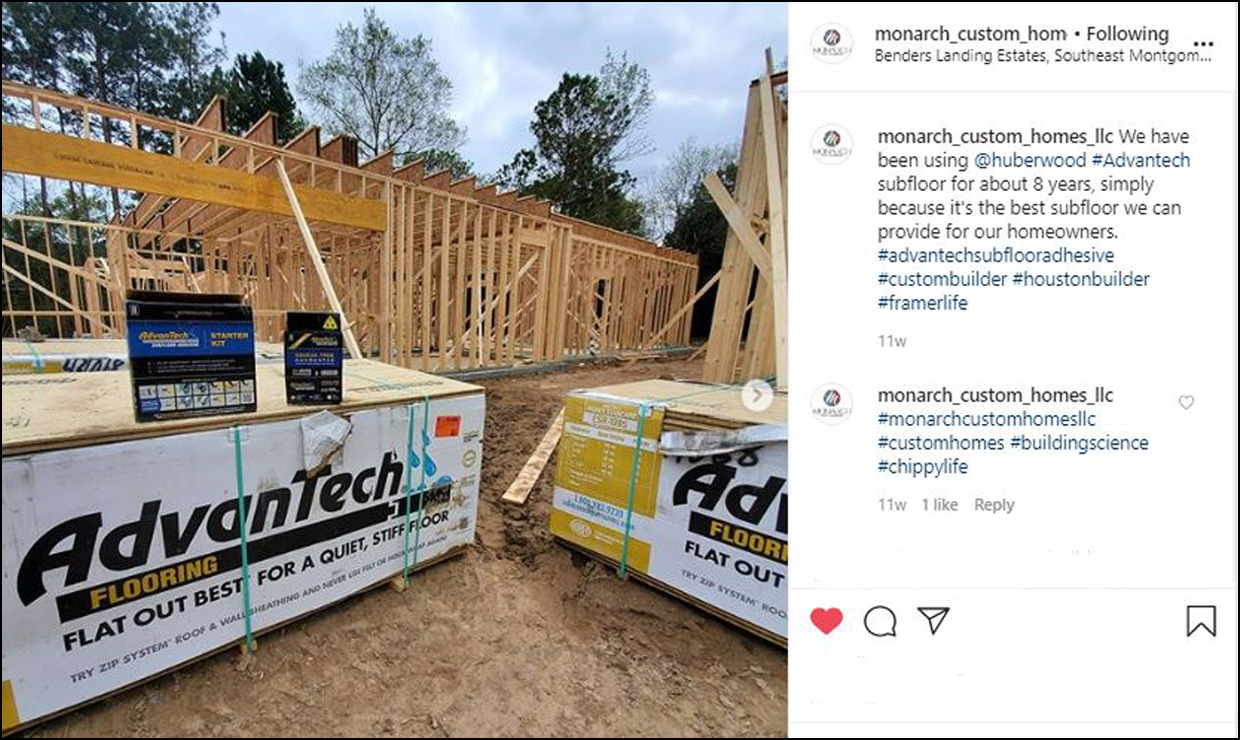 Posted on July 7, 2020 in Sponsored Headlines