‘Regulation by Shaming’: Study on Impact of OSHA Press Releases

A single OSHA press release about fines levied against a company can have the same effect as 200-plus agency inspections when it comes to future compliance by the offending employer, as well as those nearby in the same industry, a Duke University researcher recently concluded.

Matthew Johnson, a labor economist at Duke’s Sanford School of Public Policy, based his analysis – “Regulation by Shaming: Deterrence Effects of Publicizing Violations of Workplace Safety and Health Laws” – on a 2009 policy OSHA rolled out agencywide that required press releases be issued for any safety and health violation that resulted in a fine of at least $40,000. The releases were sent to targeted local media outlets and industry trade publications, with the intent to increase publicity. 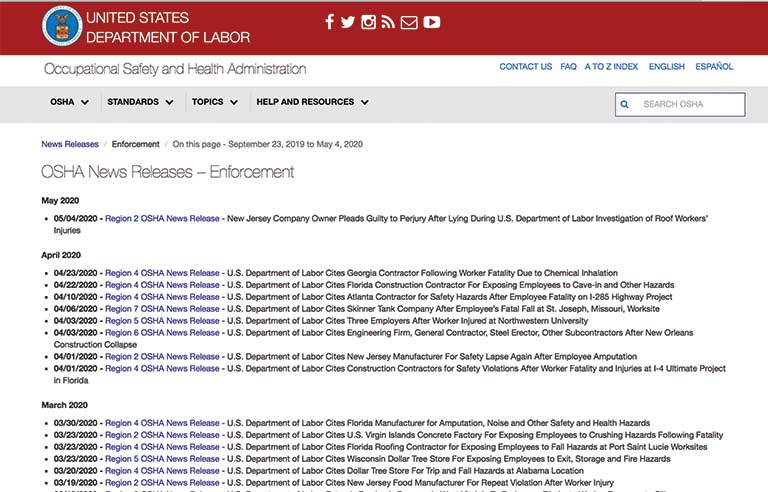 To arrive at his conclusion, “there were some assumptions that went into it,” Johnson said. After an OSHA press release is issued, “there are about 311 inspections of other facilities in the same industry in a [31-mile] radius” during a subsequent three-year period, Johnson told Safety+Health. For the typical press release, a 30% decrease in violations was observed. He also cited a 2010 study published in the journal Regulation & Governance that showed a typical OSHA inspection leads to 48% fewer violations after a later inspection at the same facility.

Using a ratio of these data, he determined that one press release has the same impact as 210 OSHA inspections. The policy “significantly changed the frequency of media coverage” of OSHA, Johnson notes in the study.

“That’s a very powerful finding,” David Michaels, who headed the agency from 2009 to 2017, told S+H. “We know that different employers react differently. By reading about an OSHA press release, some may take it as a reminder to do the right thing. Some may be concerned and might want to avoid an OSHA inspection. Whatever the motive, the outcome is the same.”

Along with the negative impact to the employer who was fined, Johnson’s research showed 73% fewer violations among employers in the same industry within about 3 miles of the offending employer’s location.

“The main thing it did was [raise] OSHA’s visibility,” said Michaels, who provided his own quotes for national press releases and encouraged area and regional directors to provide quotes and do TV interviews about employers who received large penalties. “OSHA is badly under-resourced. Given that, we looked at how we address the problem wholesale rather than retail. We realized that by issuing press releases where we found serious violations, it would nudge other employers to abate hazards without OSHA having to do additional inspections.”

According to Johnson’s report, the Trump administration discontinued the policy. Edwin Foulke Jr., former OSHA administrator from April 2006 to November 2008, told S+H it’s a certainty that employers mentioned in the agency’s press releases are impacted, but he’s not sure a press release can be as far-reaching as Johnson suggests.

“They don’t like press releases,” Foulke said. “There’s no doubt about that. But you can’t just say a press release caused injuries and fatalities to go down in this area or this industry. There are too many variables with respect to safety. You can’t just look at this in a vacuum.”

OSHA did not respond to questions from S+H.

“We were issuing more (detailed) press releases and less cookie-cutter press releases,” Michaels said. “This is clearly a very powerful tool, and OSHA should utilize it.”

For example, Michaels provided stern comments for a July 9, 2015, press release announcing proposed OSHA fines of $273,000 for DuPont after four workers were killed at the company’s chemical plant in La Porte, TX.

“By issuing a press release where I personally described the failure of DuPont’s safety systems, I was sending a message,” Michaels said. “The CEO actually came to see me as a result of that press release.”

To Foulke, however, issuing press releases about one large fine may have a short-term impact, but “I don’t necessarily see it in the long term.” In addition, Foulke said employers who have numerous smaller violations rather than one willful violation weren’t affected by the policy.

“What it comes down to is you have to get a big penalty to get a press release,” Foulke said. “If you had 100 other-than-serious violations with a $5,000 penalty, there’s no press release. Who has the biggest problems with safety?”

The study is scheduled for publication in the June edition of the American Economic Review.