Editor's Note: Katerra's newest CEO, Paal Kibsgaard, is the company’s fourth CEO since it was founded in 2015.

Paal Kibsgaard, a former oil industry exec, has been tapped as the new chief executive of Katerra, which also said Tuesday it has secured $200M in funding from SoftBank Group's Vision Fund.

Kibsgaard, who has served on Katerra's Board of Directors since 2016, first joined its C-suite last year, coming on as chief operating officer. In his new role, he succeeds co-founder Michael Marks, who is leaving for a full-time role at Silicon Valley venture capital firm WRVI Capital. 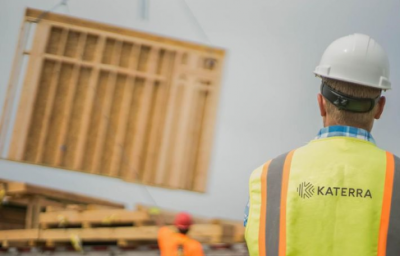 Courtesy of Katerra. Like several other rising Silicon Valley startups, Katerra has had to cut its workforce in response to the abrupt economic slowdown.

Kibsgaard's ascension and the latest injection of capital come as Katerra, like other companies, adjusts to the economic effects of the coronavirus pandemic. The company cut about 240 employees, or 3% of its global workforce, early last month, Bisnow reported at the time.

Its new round of funding brings Katerra's total capital raised to over $2B, much of it from SoftBank, through the years. Katerra declined to disclose SoftBank's stake in it.

The Menlo Park, California-based company, which aims to transform the construction industry with tech-enabled off-site building, has seen mixed results since its 2015 founding. It faced reports of cost overruns and project pullouts last year, but the company also boasts a growing project portfolio.

Katerra has over 6,000 multifamily units under construction and a contract with the government of Saudi Arabia to build 8,000 homes in the country.

Before Katerra, Kibsgaard served as chairman and CEO of Schlumberger, an international oilfield services company.

"The board is excited to welcome Paal to the role of CEO as he builds on the foundation Michael established as founder of Katerra," SoftBank Vision Fund Managing Partner Jeff Housenbold said in a statement.

"The new round of financing further strengthens Katerra's balance sheet, enhances its competitive positioning, and provides growth capital as Katerra executes on its mission to radically transform the way people build commercial and residential properties."

Posted on May 29, 2020 in Most Popular Articles, Press Releases