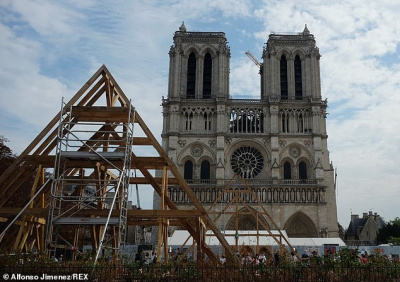 The team raised a three-ton oak truss — by hand — in front of the famous landmark in Paris on September 19.

The wooden structures are a replica of those consumed in the devastating fire in April 2019.

Medieval techniques were used by the carpenters to build the triangular frames in the central part of the church according to AP.

It comes after a decision to replicate the cathedral in it's original form.

General Jean-Louis Georgelin, head of the reconstruction, said it was the 'right choice' to build the carpentry identically.

The spire was also toppled in the blaze, and there were debates on whether the new spire should be futuristic or made of fireproof cement.

A decision was made in July to respect the original design and material of the cathedral. 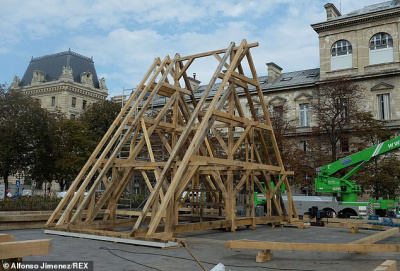 A total of 25 trusses are to be installed in the cathedral nave, with President Emmanuel Macron wanting it reopened in time for the Paris Olympic Games in 2024.

With rope cables and a rustic pulley system, the carpenters slowly pulled the truss they built in July from the ground where it was laid out.

Once the truss replica was raised on high, a carpenter shinnied up the wooden beams to tie an oak branch to the top of the triangular structure.

This is a symbol of prosperity and a salute to the workers, a tradition still honoured in numerous European countries.

Posted on September 25, 2020 in Most Popular Articles, Housing & Construction