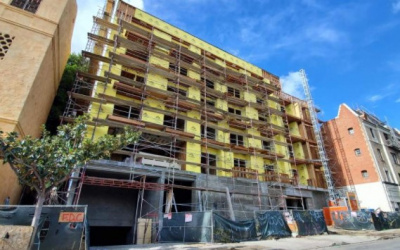 In a move which is billed as an attempt to reduce the city's vulnerability to wildfires, the Los Angeles City Council voted earlier today to explore a proposal which could curtail the use of wood-frame construction for larger developments in some of its most densely-populated neighborhoods.

The report back, based on a recommendation from the Council's Public Safety Committees, would effectuate an expansion of Fire District 1 - an area which currently encompasses commercial hubs and neighborhoods with older buildings such as Downtown, Century City, Hollywood, and Koreatown.  It would apply to all projects consisting of at least 150,000 square feet of floor area, or as little as 100,000 square feet of floor area if the building would be more than 30 feet in height. 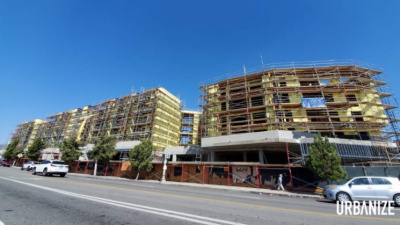 Under the instruction adopted by Council, the report will examine the impacts of an expansion of Fire District 1's boundaries to include all areas within the City of Los Angeles covered by the California Department of Forestry's Very High Severity Zone and the City's High Wind Velocity Zone.  Hillside neighborhoods across the city could be impacted by the changes, as could portions of Highland Park, Echo Park, Silver Lake, Los Feliz, and Pacific Palisades.

Outside of specific geographic areas, the proosal would also impact population centers with a density of at least 5,000 residents per square mile.  The boundaries would be adjusted to reflect population change every 10 years, based on U.S. census data.

Likewise, the Council’s instructions requests staff recommendations on "how to ensure that top-quality, skilled and responsible construction practices," are used for new projects in the expanded Fire District 1 zone.

The proposal, which was initiated by a motion introduced by City Councilmembers Bob Blumenfield and Monica Rodriguez, is backed by an organization called Build with Strength.  The campaign, led by the National Ready Mixed Concrete Association, bills itself as a coalition of housing advocates, architects, engineers, and labor unions with the goal of limiting the use of combustible materials in the City of Los Angeles and eventually statewide.

"We fully support the City Council's efforts to strengthen building practices in our city," said Los Angeles/Orange Counties Building and Construction Trades Council executive secretary Ron Miller in a March news release. "We represent the skilled men and women who build LA. We see firsthand how important safety is. This ordinance will have a huge impact on many communities across the city, and I encourage the City Council to act swiftly and give all residents access to safer and more resilient housing."

However, others in the architecture and design community are not aligned with the Build with Strength effort.

In a letter submitted to the City Council, architect Simon Ha with Steinberg Hart argues that the goals of the proposal are at odds with the City's efforts to increase its supply of housing.  In addition to potential cost increases resulting from the inability to use wood-frame construction, the more stringent code requirements of Fire District 1 would prevent projects from taking advantage of certain incentives granted under the Transit Oriented Communities guidelines - the affordable housing bonus program which generates the lion's share of the city's new housing. 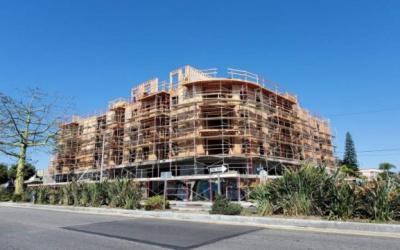 "The incremental cost increase is about 5 to 10 percent from Type V to Type III, so if you were building on Sunset Boulevard at the border of West Hollywood and the City of L.A., it would cost 5 to 10 percent more to build in L.A. than in West Hollywood," says Ha.  "Does a building on L.A. side of Sunset carry a higher risk than across the street in West Hollywood?  If the answer is no, why should the city impose extra regulations that can add additional burden to housing production?"

Likewise, Ha notes that restrictions on wood-frame construction would not align with a pending update to the California Building Code which is expected to allow the use of mass timber construction statewide.

Similarly, 11th District Councilmember Mike Bonin requested that a distinction be made between the use of mass timber construction and typical wood-frame construction, and requested a report on the viability of the construction type.

Others, including rival trade groups and the advocacy organization Abundant Housing, have also argued that the proposal would ultimately result in Los Angeles building less housing than it would otherwise.  Those concerns were echoed by 4th District Councilmember Nithya Raman, who questioned whether expanding Fire District 1 would impact the city's ability to produce new affordable housing.

Blumenfield, dismissed arguments that the proposal would impact the cost of affordable housing, and stated that the proposed expansion of Fire District 1 would only impact an additional 2 percent of the city.