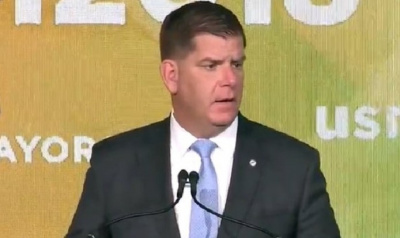 "Workers can't wait," said Jessica Martinez, co-executive director of the National Council for Occupational Safety and Health, in a statement. "We know that workers still face the risk of COVID-19 infections in their workplaces, and we know that these infections can spread to neighborhoods, families and communities."

The issuance of an ETS, which would supply a single, minimum standard for employers to follow in protecting employees from COVID-19 at work, has been an issue of debate since early in the pandemic. OSHA declined to issue an ETS during the Trump administration, even as worker groups unsuccessfully sued it to do so.

Employers have said an ETS isn't necessary, since they're already been following CDC guidance on COVID-19 mitigation, though some have complained that varying state requirements have cost them money by having to comply with patchwork rules.

Now, with Walsh in place as labor secretary for only two weeks, time may have run out for an ETS to be put in place. "This is not the kind of thing you'd want necessarily an acting secretary to issue," said Sigel, who wrote a recent Law360 article on ETS hurdles.

Meanwhile, the reasoning given for pausing the development of an ETS has experts questioning whether it has become a moot point.

"The focus on the state of the disease suggests Secretary Walsh and his team at OSHA realize that there is no longer an emergency due to the rate of vaccinations throughout the country and many of the U.S. population will be vaccinated in a matter of months," wrote James Sullivan, co-chair of the OSHA-Workplace Safety Practice at Philadelphia-based law firm Cozen O'Connor, in a posting on legal knowledge-base site JD Supra. "That eventuality presents a significant roadblock for OSHA."

At the same time, now may also not be the most opportune moment for the Biden administration to push for more workplace rules, as it tries to sell its $2 trillion American Jobs Plan to companies across the U.S.

"You have to think about what kind of political air would be taken up with this debate about an ETS that the Biden administration may not want to be taken up right now," Sigel said. "Especially if they're looking for support from employers, such as those in the construction industry, for the infrastructure plan, for instance."