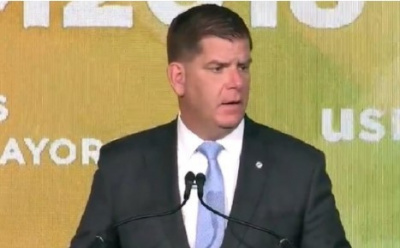 US Conference of Mayors

Biden previously stated an intention to be the "strongest labor president you ever had" and, if confirmed, Walsh is likely to play an important role in the administration's workforce agenda.

Some Republican senators questioned Walsh, a former construction union president, on his support of the Protecting the Right to Organize Act, or PRO Act. The bill, first introduced by Congressional Democrats in 2019 and reintroduced last week, would:

One criticism of the act from employer advocates is that it would interfere with state governments that have enacted "right to work" laws that generally state workers may not be compelled to join, or not to join, a labor union or pay dues to a union. Sen. Roger Marshall, R-Kan., said Biden's opposition to right to work laws amounted to "upending state constitutions" and asked Walsh during the hearing if he believed workers had the right to choose whether they wanted to be in a union.

"We need to continue to strengthen the American worker," Walsh said. "I think the worker has every right to choose what they believe." But he also called the PRO Act "one step closer to helping people organize freely."

Walsh said OSHA is "one of the first and top priorities for me," and he agreed with Biden's plan to increase the number of inspectors at the agency. He also pointed to the need for job training programs to help workers displaced by the pandemic, and he said the labor department would pursue collaborations with agencies including the U.S. Departments of Commerce and Education, in order to create training opportunities.

"These are not just policies to me," Walsh said. "I live them. Millions of American families need them."