Chart: Housing Shifts Sharply to the Suburbs in 2020

A trend of higher demand for housing in lower-density areas reported in the second quarter National Association of Home Builders (NAHB) Home Building Geography Index (HBGI) has persisted into the fall, as single-family and multifamily construction continued to overperform in lower cost markets like suburbs and exurbs. The third quarter HBGI reveals that a suburban shift for consumer home buying preferences in the wake of the COVID-19 pandemic is accelerating as telecommuting is providing consumers more flexibility to live further out within large metros or even to relocate to more affordable, smaller metro areas.

In the third quarter of 2020, the HBGI data showed that the urban core share of single-family home building dropped by 0.3 percentage points from the previous quarter, a significant move for a single quarter. Regional shares of single-family and multifamily homebuilding have been shown to change composition slowly over time (making a one percentage point change in the four-quarter moving average of a market share over a single year is noteworthy). For both single-family and multifamily building, the ability of individuals and families to live further from urban cores is empowering consumers to acquire housing with more space at a lower cost. 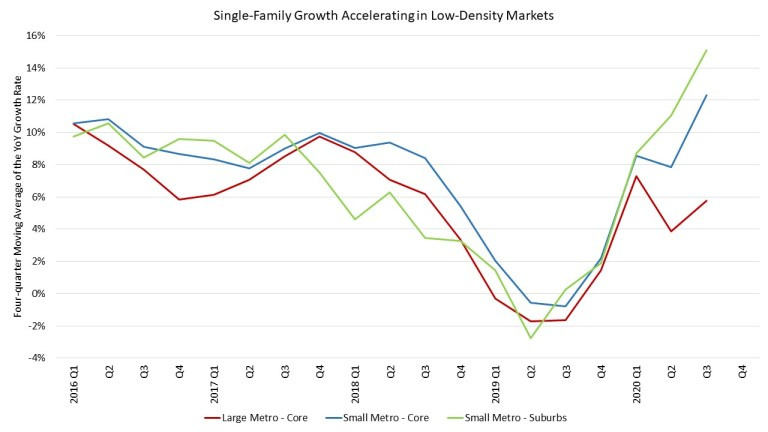 The pace of multifamily home building in large metro core areas deteriorated over the year in a similar way as its single-family counterpart, posting a 4 percent decline for apartment construction.

Forthcoming analyses in this edition of the HBGI will detail multifamily development in the third quarter further. Additionally, we are offering a new look at building conditions in vacation home markets.

The third quarter HBGI data can be found at nahb.org/hbgi.

Posted on January 7, 2021 in Housing & Construction