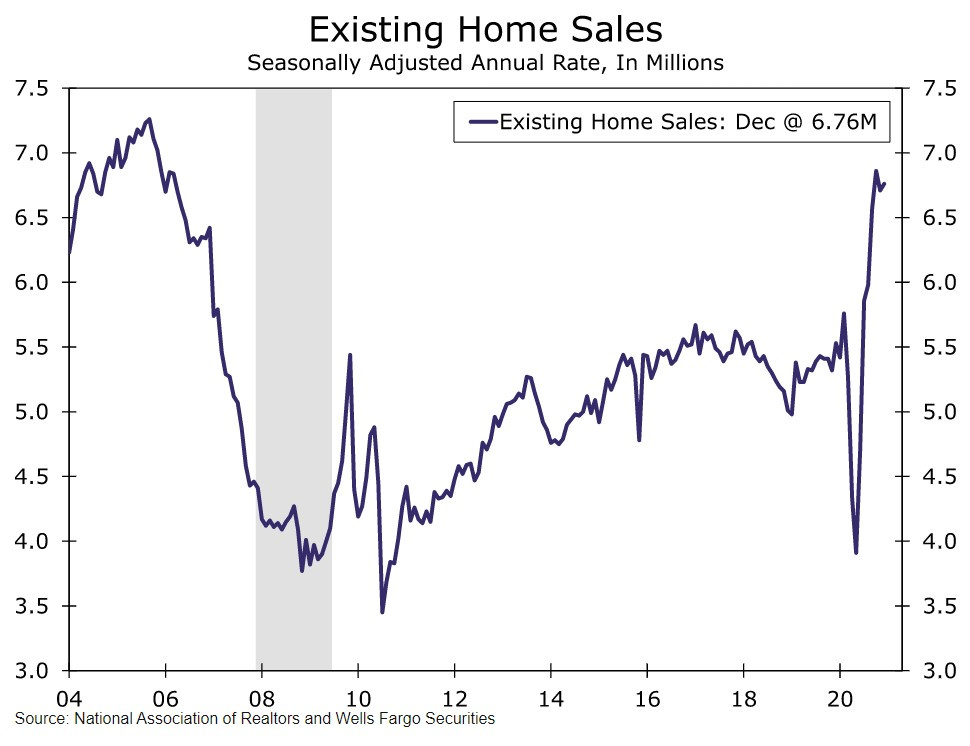 Housing Remains at the Forefront of the Recovery

Housing Remains at the Forefront of the Recovery 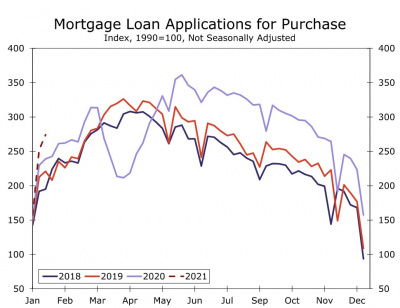 The housing market was the primary focus of attention this week. Over the course of 2020, housing emerged as one of just a few bright spots in an otherwise horrible year. Driven by record-low mortgage rates and shifting preferences for more livable space to accommodate virtual activities, home sales, housing starts and builder confidence quickly recovered from the deep losses experienced during the lockdown months last spring.

With the calendar now turned to 2021, the housing market appears to be cooling off a bit. Still, even with some moderation, most indicators of housing activity are running at a robust pace. During December, existing home sales beat expectations and rose 0.7%. The 6.76 million-unit pace of sales is over 22% above prior-year levels. What's more, mortgage applications for purchase continue to trend higher, which means the pace of home sales is likely to remain elevated over the coming months. Purchase application increased 2.7% during the week of January 15 and are now up 14.7% over the past year. 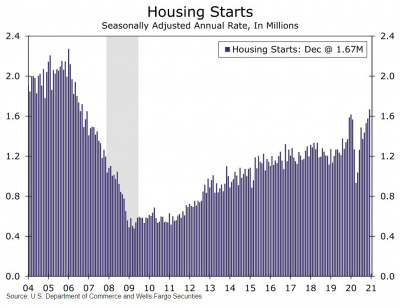 Similarly, residential construction continues to heat up as builders move to satiate rising buyer demand. Total housing starts jumped 5.8% to a 1.67 million-unit pace in December, which is the strongest pace since 2006. The monthly gain was owed entirely to a robust 12% surge in single-family starts. Single-family starts are now up 27.8% over the year. By contrast, multifamily construction continues to pull back somewhat, alongside rising rental vacancy rates and shifting preferences for single-family homes. Multifamily starts declined 13.6% in December and are down 38.7% year-over-year.

Considering the momentum in the single-family sector, it comes as little surprise that builder confidence remains exceptionally high. The NAHB Housing Market Index dropped two points to 83 during January, but is still only slightly below the high-water mark of 90 reached in November. Several factors appear to have pulled down builder confidence from on high. For one, the re-emergence of COVID is likely keeping potential buyers at home, which helps explain the recent dropoff in the prospective buyer traffic sub-component. Supply-side challenges, namely surging lumber prices, which can significantly drive up the cost of building a home, are also creating some challenges.

Overall, we expect housing to remain at the forefront of the recovery. Meanwhile, the labor market is still clearly far from returning to prior peak levels. New filings for unemployment benefits fell the week ended January 16; however, at 900K, initial claims remain highly elevated. The drop in claims is a welcome development, but another negative print for payrolls in January remains within the realm of possibility. 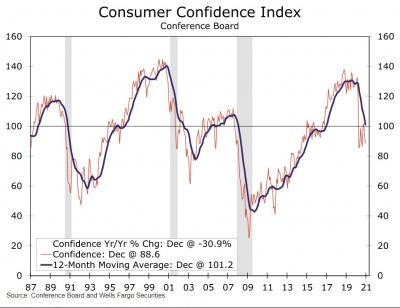 Consumer spending ended 2020 on a soft note with retail sales falling in the final three months of the year. Thanks to robust spending in the summer and fall months, holiday sales managed an 8.7% year-over-year increase, but it was clear that amid rising case counts the consumer was hunkering down. This was also evident in the consumer confidence figures, which came in at 88.6 in December, well below the 97.0 that had been expected by the consensus.
With case counts continuing to rise in the first half of January and the unrest in Washington, how are consumers holding up in the new year? On Tuesday, we will get a better sense of that when the Conference Board's preliminary report for January consumer confidence hits the wire. The University of Michigan’s consumer sentiment index prints on Friday. 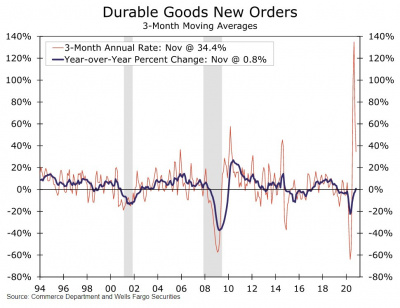 While the service sector has continued to be buffeted by social distancing requirements and a resurgent virus, the manufacturing sector has continued to rebound nicely. This dynamic is evident in the purchasing manager surveys. The ISM services index rebounded to 57.2 in December, but that is still a few points shy of the manufacturing ISM, which sits proudly at 60.7.
We already know from the soft retail sales figures that service sector activity was soft in December, but how is the hard data holding up for manufacturing? On Wednesday of next week, December durable goods orders will give the latest indication of how manufacturing is faring heading into the start of 2021. 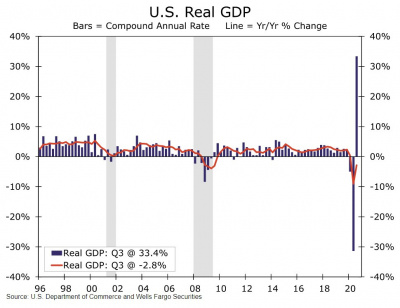 In the third quarter, the economy expanded at a 33.4% annualized rate. This was the reopening quarter after lockdowns caused growth to crater in the prior quarter. On Thursday of next week, we will get the first estimate of how the economy fared in the final quarter of the year.
The low base effects and the reopening of the economy that flattered third quarter growth will not be in play, so a sharp slowdown is in order. It is just a question of how much. Our bet is that GDP grew at only a 4.0% clip as consumers slowed their pace of spending and the rebound in business fixed investment likely lost some steam as well.
A significantly better or worse outturn could obviously have implications for growth in 2021, as it sets the base level for output in the new year. We will also be watching inventory investment. The net change in inventories will likely be positive for the first time in over a year.

Don't Expect Much from the FOMC Next Week

The Federal Open Market Committee (FOMC) holds its first meeting of 2021 on January 26-27, but don't expect the committee to announce any major policy changes. Yes, the economy has lost a fair amount of momentum in recent months as renewed restrictions to slow the spread of COVID have been put in place in many states. However, the Summary of Economic Projections (SEP) that the FOMC released at the conclusion of its last meeting in December showed that most committee members generally remain upbeat about the economic outlook later this year. As shown in the graph below, most committee members forecast that U.S. real GDP will grow roughly 4% to 5% this year. This view is predicated on the assumption that the economy fully reopens later this year as vaccines become widely deployed. Furthermore, President Biden has proposed another fiscal relief package. Although the full $1.9 trillion package likely will not survive the congressional approval process, some portion likely will be legislated. More fiscal relief would reduce some downside risk to the economy in coming months. 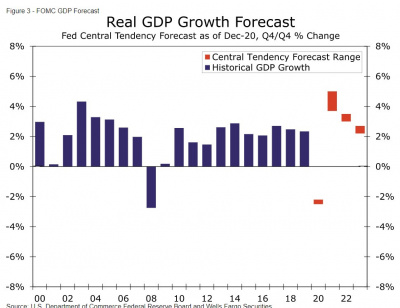 Therefore, the FOMC is likely in watch-and-wait mode at present. The committee clearly will not be raising rates anytime soon, and it will continue to purchase Treasury securities and mortgage-backed securities at its current monthly pace of $80 billion and $40 billion, respectively, for the foreseeable future, which should help to prevent a sharp rise in long-term interest rates. Chairman Powell may be asked in his post-meeting press conference about the committee's plans to eventually dial back the pace of asset purchases, but we expect him to refrain from discussing a specific timeline. In our view, the FOMC is likely to err on the side of providing “too much” policy accommodation rather than “too little” until signs emerge that the U.S. economy has truly entered a self-sustaining recovery. Downside risks to the economy will remain elevated until the pandemic finally recedes for good. For further reading about our views regarding Fed policy, see “January Flashlight for the FOMC Blackout Period”. 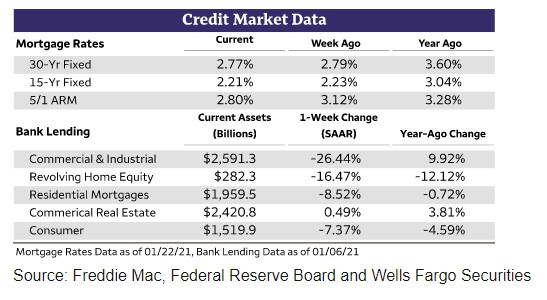 Topic of the Week 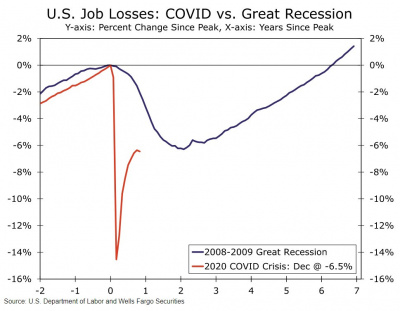 What Are the Prospects for Another COVID Relief Deal under President Biden?

The Democratic sweep in the Georgia Senate elections has given Democrats unified control of the House of Representatives, the Senate and the White House for the first time since 2009-2010. This in turn has created an opening for the most sweeping economic policy changes driven by the Democrats in a decade. However, the window for change is about as tight as is conceivable due to the razor-thin majorities in both chambers. In the House, the Democratic majority is just a few seats, while the Senate is tied 50-50, with the tie broken by Vice President Kamala Harris. It will be a challenging political landscape for the new administration to navigate, as even small defections from either flank of the Democratic party could sink new legislation. 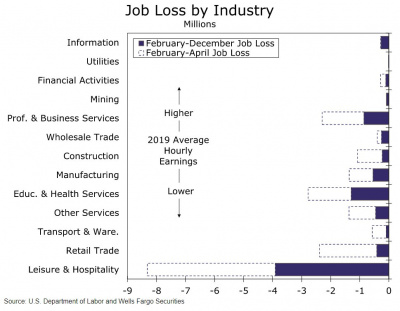 Shortly before his inauguration, Joe Biden released a 19-page outline for a roughly $1.9 trillion “American Rescue Plan." The full details of the plan can be found here. The proposal looks a lot like previous COVID relief packages, but with more sizable numbers and with some additional progressive policy additions. Biden's plan would send out additional $1,400 checks on top of the $600 payments that were made under the COVID relief bill passed in December 2020. For unemployment insurance, the plan would increase the current $300 a week federal top-up to $400 and extend these payments, as well as the pandemic unemployment insurance programs created in the CARES Act, through September 2021. Additional household income support would come from increasing the child tax credit for 2021 to $3,000 from $2,000 and making it fully refundable, making the Earned Income Tax Credit more generous and extending the current 15% increase in Supplemental Nutrition Assistance Program (SNAP) benefits through September 2021.

We view President Biden's proposal as an opening bid and not necessarily an outline that will be translated into law verbatim. But, the 19-page outline is fairly detailed for an opening bid, and it firmly signals that another COVID relief deal will be a Day One legislative priority for the Biden administration. Our expectation is that a deal will eventually be struck, probably in March, but that the final legislation will be much smaller than what is in Biden's proposal, and more along the lines of the $900 billion package that was enacted in December.

For further reading, see our recent special report “What Are the Prospects for Another COVID Relief Deal under President Biden?”