Charts: More Homebuyers to Jump into the Market

The December Household Spending Survey, published by the New York Federal Reserve Bank, showed a modest increase in household spending over the past four months, and a surge in the median expectation for year-ahead household spending to highest level since August 2015. Only 2.2% of households bought house or apartment over the past four months, lower than the 3.8% in August. However, the average percentage of households planning to buy houses within the next four months jumped from a series low of 3.3% in August to 6.2% in December.

The Survey of Consumer Expectations (SCE) is a monthly survey of U.S. households by the New York Federal Reserve Bank. The survey collects timely information on consumers’ expectations and decisions on a broad variety of topics, including but not limited to inflation, household finance, the labor market, and the housing market. This analysis will focus on the Household Spending Survey, part of the Survey of Consumer Expectations.

The survey showed that the median increased in monthly household spending compared with a year ago retreated from 1.9% in August to 1.6% in December, but was higher than the record-low 1.0% in April. The decline was largely driven by the 40 to 60 age group and by lower income (below $50,000) households.

The share of households reported making at least one large purchase in the last four months rose slightly from 54.0% in August to 54.6% in December. Though it was still below pre-pandemic levels, the gradual growth signified that consumers were cautiously spending more as the economy reopened and more people gradually returned to work.

Looking deeper, the proportion of households that bought electronics and vehicles over the past four months increased and was nearly back to the levels before the pandemic, while the shares in other categories decreased. Though the shares of households that bought home repairs and house or apartment declined 2.6% and 1.6% in December, both were still higher than December 2019 level. This is in line with an NAHB analysis which showed construction spending on improvements grew substantially in 2020. Meanwhile, the percentage of household spending on vacation fell to another series low. 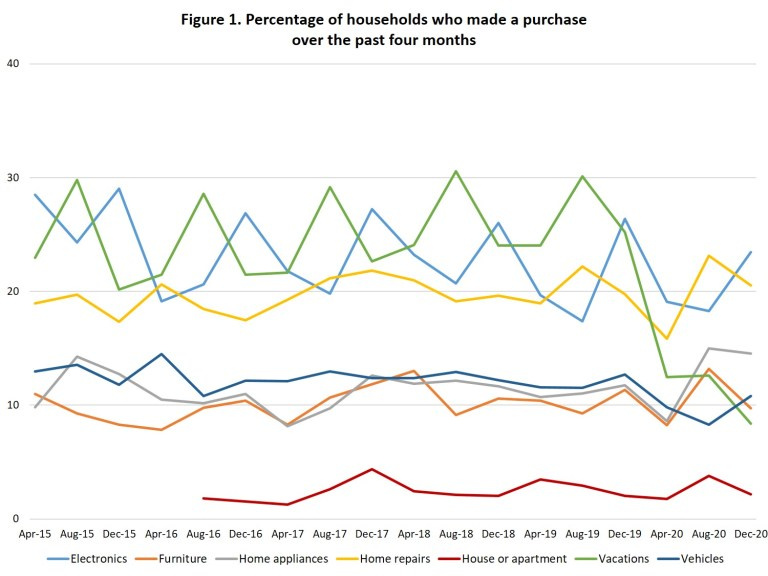 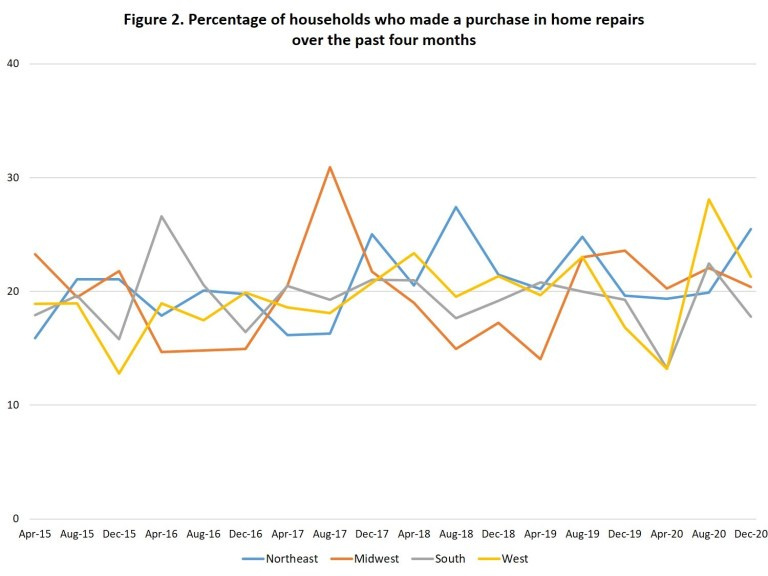 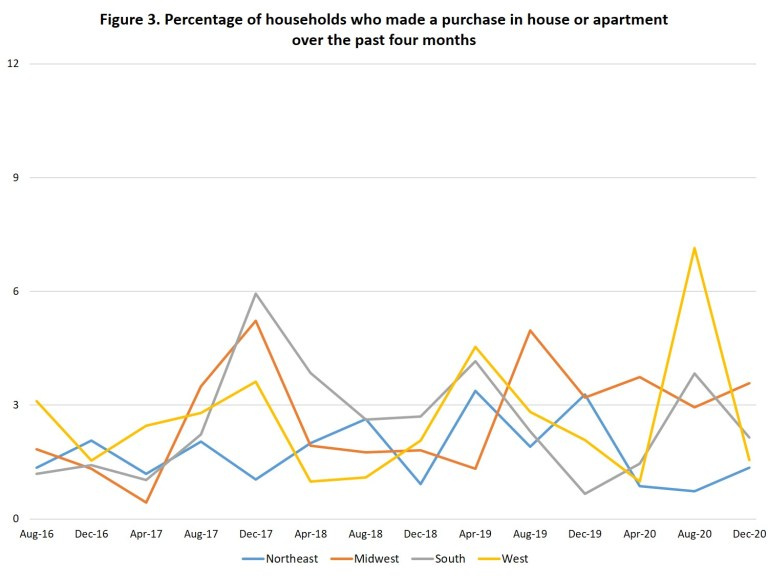 Generally, consumers were more optimistic about how much they would spend over the next a year, consistent with more positive expectations following the deployment of the vaccine. According to the survey, the median expected growth in household spending over the next year sharply increased to a record high of 3.0% in December, from 2.2% in August and 2.4% a year ago.

The median year-ahead expected spending growths in clothing, food, housing, recreation and utilities have increased since the start of the pandemic, while those for education, medical care and transportation slightly decreased. Regionally, median expected spending growth in housing in all four regions nearly returned back to pre-pandemic level in December.

The average likelihood of households making a large purchase over the next four months increased for furniture, home repairs, a house or apartment, vacations and vehicles in December, but fell slightly for electronics and home appliances. Relative to December 2019 levels, the percent chance of household purchasing home repairs and house or apartment remained elevated. 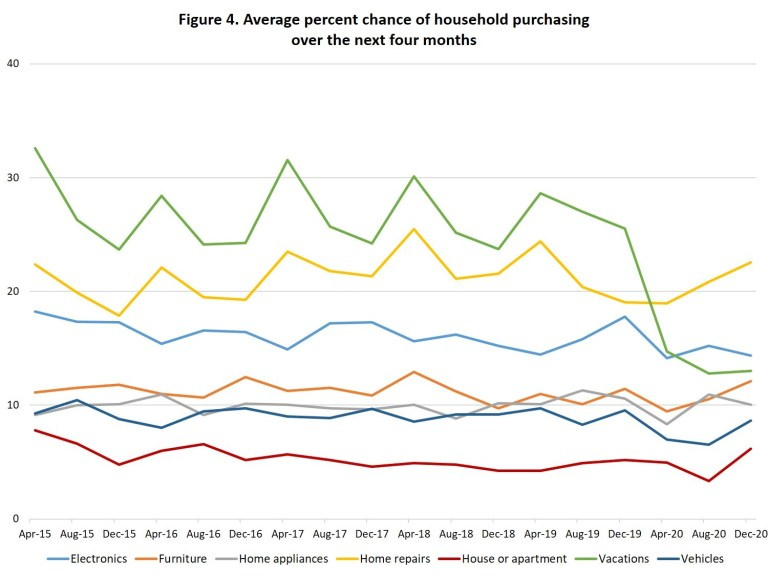 All four regions saw an increase in the average percent chance of household purchasing home repairs and house or apartment compared with the figures from August to December. However, the average likelihood of home purchase in the Midwest and South was still below December 2019 level. 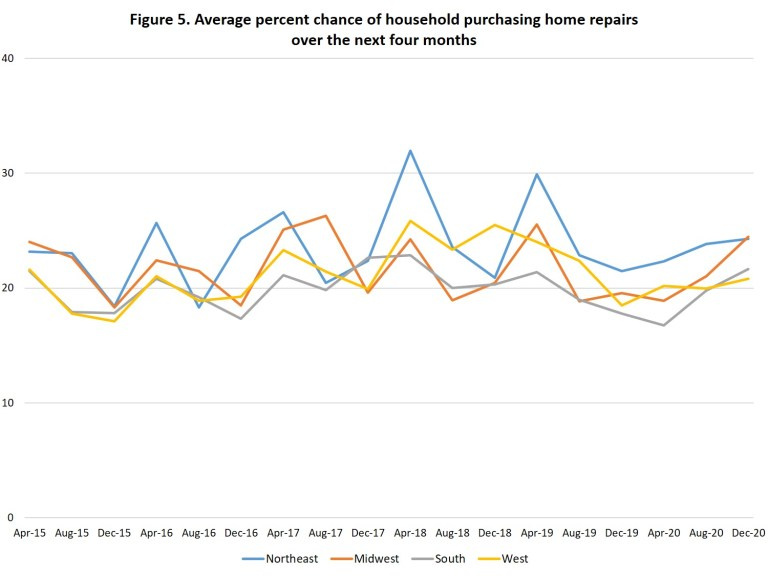 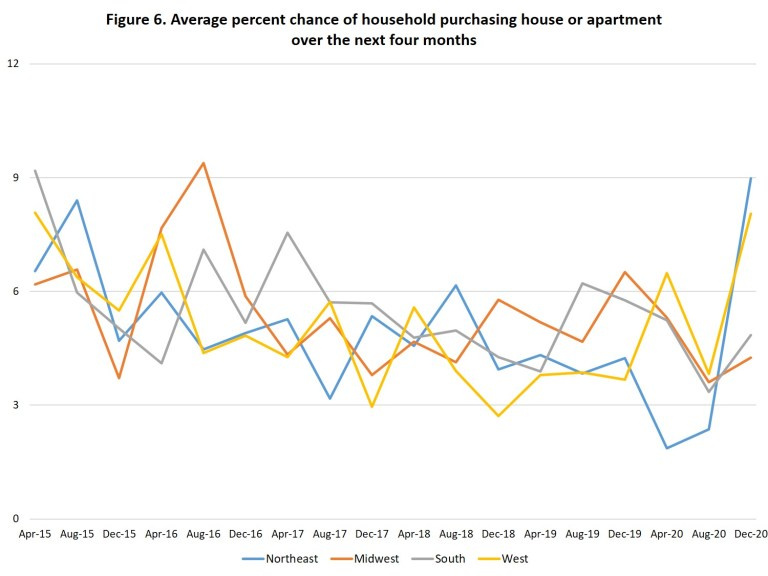