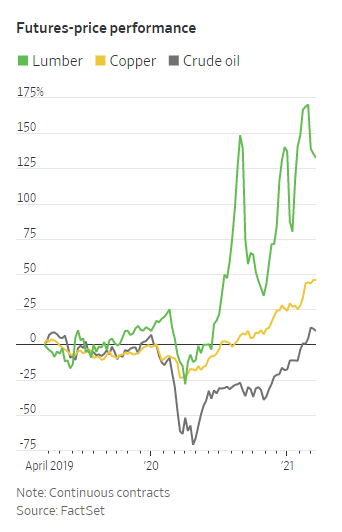 Prices are surging for the raw materials used to build American homes.

Lumber, one of the biggest costs in home-building after land and labor, has never been more expensive and is more than twice the typical price for this time of year. Crude oil, a starting point for paint, drain pipe, roof shingles and flooring, has shot up more than 80% since October. Copper, which carries water and electricity throughout houses, costs about a third more than it did in the autumn.

Prices for granite, insulation, concrete blocks and common brick have all pushed to records in 2021, according to the Bureau of Labor Statistic’s producer-price index, which measures the change in prices that producers receive for their output. Drywall and ceramic tiles are short of records but have also climbed.

Materials producers like paintmaker Sherwin-Williams Co.  and flooring manufacturer Mohawk Industries Inc.  as well as builders D.R. Horton Inc.  and Hovnanian Enterprises Inc.  have been raising prices to pass along higher costs. They can thank historically low borrowing costs, federal stimulus payments and a hunt for yield that has sent investors barreling into the home-rental business.

“Whoever the home buyers are, they have been able to pay for it,” said Todd Tomalak, who tracks building products for John Burns Real Estate Consulting.

“Fortunately, we’ve been in a rental-rate growing environment, and that has kept us yield neutral,” said Jack Corrigan, the company’s chief investment officer.

Investors are watching all corners of the economy for signs of stimulus driving a pickup in inflation. They are finding it in housing, where rising input prices are translating into higher costs for consumer goods.

Federal Reserve policy makers say they haven’t seen enough of a jump in the price of goods and services to alter their course of holding interest rates near zero and pumping cash into the economy, which remains in recession and plagued by unemployment. 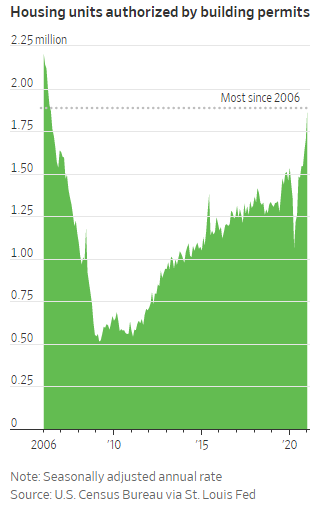 Rock-bottom mortgage rates have made owning a house more affordable, while the Fed’s purchasing of mortgage-backed securities has spurred lending. Lower household spending during the lockdown and federal stimulus checks have helped people accumulate down payments. House hunters are bidding up properties alongside legions of investors who are buying and building a growing share of America’s houses and renting them out.

The competition for houses has lifted home prices in almost every part of the country, enabling those who already owned to use their homes as cash machines. Americans pocketed $152.7 billion from cash-out refinancings last year and went on a remodeling bender.

Building supply chains weren’t prepared when Americans began swarming model homes and Home Depots in April. Sawmills and factories shut down like most other workplaces early in the lockdown. Oil wells were shut in, and refineries idled. A spate of hurricanes knocked out Gulf Coast facilities that produce polyvinyl chloride, or PVC, raising prices to records for the material used for waste pipes and siding, according to ICIS, which tracks chemical commodities.

Suppliers never caught up. Now building permits for residential construction are being issued at their highest rate since 2006. And the latest round of stimulus checks are landing in bank accounts just in time for spring, when Americans tend to house hunt and start remodeling projects.

CanWel Building Materials Group Ltd. , which distributes building supplies in Canada and the western U.S., has enough orders for rot-resistant wood to keep its lumber-treating facilities running at capacity through 2021.

“We’re sold out. We can’t take on any more business this year,” Chief Executive Amar Doman told investors last week. “Everything that we’re producing is sold, and it’s out the door.”

Lumber and other wood products took off last summer and have remained aloft. Futures for delivery this month ran up to $1,040 per thousand board feet, nearly triple the typical price this time of year. The story is similar for oriented strand board, used for walls, floors and roofs. Many engineered wood products are in short supply and hard to find.

The National Association of Home Builders says that rising lumber prices have added $24,000 to the cost of building the average single-family home and about $9,000 per apartment. The lobbying group last week asked Commerce Secretary Gina Raimondo to seek immediate remedies to boost production.

Executives with D.R. Horton, the country’s largest home builder, said they are paying more for lumber as well as shingles and facing short supplies of windows and appliances.

“We are increasing our prices in general, but we balance our moves in prices relative to affordability and what we think our buyers can actually afford in terms of the monthly payments,” finance chief Bill Wheat said.

Builders boosted prices for nearly three quarters of all floor plans offered during January, according to RBC Capital Markets, compared with 54% of models that became more expensive in December.

Posted on March 18, 2021 in Most Popular Articles, Housing & Construction