In case you ever needed a picture to define the importance of diagonal bracing in the context of lateral restraint (i.e., top chord purlins as well), these photos of long span trusses say it all. The 80' trusses for this 80' x 130' x 18' high agricultural storage building were manufactured by BBL Buildings & Components, Ltd. in Perryville, MO, and then installed by a local contractor, who didn’t follow the BCSI bracing documents provided with the truss delivery.

The trusses soon started deflecting, and BBL was called to take a look at the jobsite. “We went out to investigate the problem and found that the trusses were bowed and out of plumb by 3 to 4 feet. The entire roof system was at the point of collapsing,” said Dale Schemel, General Manager at BBL. “The owner asked what could be done to straighten the trusses, and we advised him that they should be taken down immediately.”

Luckily, no one was hurt due to this dangerous construction practice. After the trusses were taken down, BBL performed a thorough inspection of the chords, webs and plates on each truss and determined they could be used as 2-ply trusses attached with screw fasteners. BBL redesigned the components to alternate every 2-ply truss followed by a new single-ply truss spaced 4'-0" o.c.

The trusses for this agricultural building, which weren’t installed per BCSI recommendations, bowed and were out of plumb by 3 to 4 feet.

The original trusses were converted into 2-ply trusses; each 2-ply truss was followed by a new single-ply truss spaced 4'-0" o.c., with proper bracing. 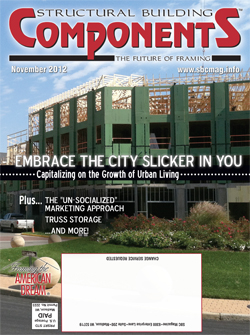 Embrace the City Slicker in You: Capitalizing on the Growth of Urban Living
The "Un-socialized" Marketing Approach