Floor Truss: An Endangered Species? How SBCA is Working to Preserve Floor Trusses in Ohio & Iowa

Floor Truss: An Endangered Species? How SBCA is Working to Preserve Floor Trusses in Ohio & Iowa

Here’s a quick history lesson. In reviewing public documents surrounding the 2010 Final Action Hearing of the ICC with regard to proposals RB31-9/10 and RB87-9/10, one would gather the following information:

Sean DeCrane, a Battalion Chief with the Cleveland, Ohio Fire Department and a representative of the International Association of Fire Fighters (IAFF) for the International Code Council (ICC) has been doing the same on behalf of firefighter safety.

In May 2010, AWC (a subsidiary of the American Forest & Paper Association (AF&PA)) and NAHB approached DeCrane and asked for his support to amend one of his proposals. The original code change proposal was AWC’s RB31-9/10; the collaboration code change proposal was RB87-9/10 (copies of these proposals can be found in the online version of this article). Their collaborative proposal amended Section R501.3 of the 2012 IRC/IBC (see Figure 1) to mandate the application of ½ inch gypsum to floor assemblies, unless a sprinkler system is installed or the joists are made from solid-sawn lumber.

It’s important to note that two organizations (SBCA & APA) focused on a more highly engineered use of wood fiber were not part of this group, nor were they privy to the private discussions regarding this proposal that were said to be facilitated by AWC at NAHB’s headquarters. A quick look at the membership and mission of AWC (AF&PA) and NAHB gives insight into the agenda of each of these organizations in bringing this code proposal to DeCrane:

SBCA has continually advocated throughout the code change process that ½ inch regular gypsum (which is equivalent to a 15-minute fire protection membrane rating) should be used across all light-frame floor systems, including 2x10 applications. This is because the directly comparable 100 percent design load fire testing indicated that 2x10s perform similarly to open-web floor trusses (see ASTM E119 table below). Furthermore, if the goal is to truly provide better protection for the fire service during a fire event, protecting everything makes the most sense.

Given this, why would the building code adopt the provision forwarded by NAHB and AWC through DeCrane?  The simple answer is politics. The general public assumes model building code development is based on serving the public’s best interest by applying the best science available to create the best possible construction product, all while meeting the building code’s mission which states:

101.3 Intent. The purpose of this code is to establish the minimum requirements to safeguard the public health, safety and general welfare through structural strength, means of egress facilities, stability, sanitation, adequate light and ventilation, energy conservation, and safety to life and property from fire and other hazards attributed to the built environment and to provide safety to fire fighters and emergency responders during emergency operations.

However, the building code is not a technical document serving this intent; it is actually a political document. We ended up with the R501.3 proposal (see Figure 1) being approved and adopted into the 2012 IRC/IBC because the strong political relationship DeCrane, AWC and NAHB have within the ICC enabled them to convince the committee that light-weight construction is bad under fire conditions.

SBCA and its members strongly believe in a key engineering and building code principle, which is to provide structural building component solutions that safeguard the public, while also serving the public’s desire to create structures that are affordable and environmentally responsible. As the building code states, this also includes providing “safety to fire fighters during emergency operations.”

However, in the case of this code provision, the fourth exception appears to intentionally make solid-sawn floor joists the clear economic winner against all its engineered product substitutes in the market, steel joists, engineered wood I-joists and floor trusses being the primary products currently used. The mantra appeared to be that while lightweight construction is bad, 2x10s are better. Yet, in looking at the ASTM E119 table, one can see that the actual fire performance of solid-sawn versus floor trusses is very similar (between 6-13 minutes).

The key problem with the ICC’s code development environment is that the time constraint allows for political (relational) factors to trump other factors. Proponents and opponents of a proposal have only two minutes to explain highly complicated and technical subjects to a committee or an assembly that generally does not have a deep level of technical expertise on all the topics that make up the building code. It would be unreasonable to expect them to know everything. Consequently, the code development process relies upon two minute sound bites from experts like AWC, NAHB and the fire service.

In this case, SBCA’s arguments for a sound-science-based code provision that also met the goal, “to provide safety to fire fighters during emergency operations,” were not successful in convincing the committee members to favor our proposal over the AWC/NAHB/DeCrane proposal.

As local jurisdictions begin to adopt the 2012 IBC/IRC, SBCA has been working with component manufacturers across the country to convince the state/local authorities to take one of the following actions:

In states like Maine, New Jersey and Pennsylvania, the fairness  argument has succeeded in convincing code jurisdictions to either amend out the R501.3 provision entirely, or, in the case of Iowa City, IA, avoid adoption of the 2012 code altogether.

While SBCA believes that adding a 15 minute fire protection membrane to the underside of all unprotected floor joists is the best and fairest approach to providing safety to fire fighters, the added cost of doing so generally becomes problematic as it confronts the local political clout of HBAs.

In establishing equivalency, the TER uses well-known published and public domain ASTM E119 standard- based test data from the 1992 National Fire Protection Association’s (NFPA) report, National Engineered Lightweight Construction Fire Research Project—Technical Report: Literature Search & Technical Analysis (NFPA Report) and is supported by the Underwriters Laboratory literature review that can be found in its report entitled “Full-Scale Floor System Field and Laboratory Fire Experiments.”  A full list of the supporting data and analysis that justifies the use of trusses as equivalent in unprotected fire performance to 2x10s can be found online here: sbcri.info/ter130202.

In particular, the TER looks at the data summarized in the ASTM E119 table, where all the testing uses this standardized fire test approach with the assembly loaded to full design load. As the TER points out, “these are the only unprotected fire endurance test results, which are currently in the public domain, that use a pure ASTM E119 standardized assembly test performed on a variety of floor assembly structural members using 100 percent design load.”  Further, the TER states, “this is the only set of publicly available data that uses a common denominator that allows for pure comparative performance assessment because all the test conditions are equivalent.”

Based on the data contained in the ASTM E119 table, it is clear that the unprotected wood truss assembly performed (10 minutes, 12 seconds) within the range of the unprotected sold-sawn assemblies (5 minutes, 30 seconds to 13 minutes, 34 seconds).  Since the fourth exception excludes, “Wood floor assemblies using dimension lumber or structural composite lumber equal to or greater than 2-inch by 10-inch nominal dimension, or other approved floor assemblies demonstrating equivalent fire performance,” unprotected metal plate connected wood truss should be included in this exception.

Using the TER in Ohio

The Ohio Board of Building Standards (BBS) is the primary state agency responsible for reviewing and adopting the statewide building code.  In 2011, the BBS approved and adopted the 2011 Residential Code of Ohio (RCO), which is based on the 2009 IECC and 2009 IRC, but also includes amendments based on IRC 2012 provisions, such as R501.3. The 2011 RCO went into effect January 1, 2013.

SBCA was invited to participate in an educational meeting on January 16, 2013 of the Central Ohio Code Officials Association (COCOA) to review major changes to the RCO.  In particular, the COCOA wanted to discuss Section R502.14 of the 2013 RCO, Residential Code of Ohio for One-, Two-, and Three-Family Dwellings (RCO), which requires certain floor assemblies to be separated from the space below, but also reviewed R501.3.

At this meeting, SBCA outlined the problems with the language contained in R501.3 that creates an unwarranted preference for floor joists made of solid-sawn lumber. SBCA also shared the fire performance data and analysis contained in the TER and discussed the benefits of applying a 15-minute gypsum barrier to all floor assemblies as the best alternative from a fire fighter safety perspective.

Using the TER in Iowa

On April 11, 2013, the City of Des Moines (IA) held a public hearing on adoption of the 2012 IBC/IRC building code.  One of the primary topics of conversation was Section R501.3. Rick Parrino (Plum Building Systems) attended the meeting, and with the help of SBCA he presented the component industry’s concerns regarding this code provision.  Parrino shared the ASTM test data and engineering analysis contained in the TER that establishes fire-performance equivalency.

This was only the first of three meetings to be held before a final determination will be made on amendments to the 2012 IBC/IRC model code for Des Moines, but it was clear that at least three members of the board (a plumber, a builder and an HVAC professional) questioned the workability of section R501.3 overall, and responded positively to the industry’s science based argument that floor trusses were equivalent in performance to 2x10s.

While this code provision was adopted into the 2012 IBC/IRC due to astute political maneuvering by AWC and NAHB, the SBCA TER makes a compelling, fact-based argument for why component manufacturers (CM) serving the Ohio and Iowa markets can deploy unprotected floor trusses in a manner that is equivalent to 2x10 joist construction with regards to fire performance. 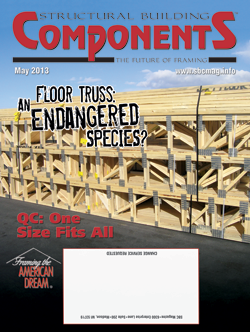 QC: One Size Fits All
Floor Truss: An Endangered Species? How SBCA is Working to Preserve Floor Trusses in Ohio & Iowa