A Man Who Left His Mark: Honoring Edward Callahan, Jr.

A Man Who Left His Mark: Honoring Edward Callahan, Jr.

Ed Callahan was a quintessential professional engineer,” remembers Dr. Frank Woeste, P.E., Professor Emeritus at Virginia Tech University. “He was always striving to do what was right for his clients and the public at-large.” Indeed, regardless of who you speak to about Ed Callahan, Jr., you’ll hear the same thing: He was a man of principle who was constantly focused on doing things as they should be done.

“He is, to me, was one of the greatest professional engineers that I will ever have the privilege to know,” echoed Bill Black, Jr. of Simpson Strong-Tie. “I always called Ed the ‘Great White Father’ because of my deep respect for him.”

From his early involvement in the Truss Plate Institute (TPI), to his authorship of the structural building component industry’s first wood truss handbook, from his involvement in countless structural advisory committees to his relentless testing of metal-plate connected wood trusses, Callahan, Jr. played an integral part in establishing the strong engineering foundation the components industry now builds upon.

“I think one of the things that drove my father was his motivation to leave something tangible behind to show he made his mark here on earth,” explained his son, Ed Callahan, III. “He wanted to make the world a better place, and through ensuring that homes were built safety and correctly, I think he did that.”

The Birth of an Industry

Callahan, Jr. was a first-generation Irish-American, born in Philadelphia on January 21, 1933. He attended Catholic schools through high school and graduated from the University of Miami in 1954 with a degree in Architectural Engineering. The timing and location of his education was perfect, as A. Carroll Sanford had invented his Gri-P-Late in Miami only a couple years earlier, and by 1955, Sanford’s invention was issued the first Engineered Bulletin by the Architectural Standards Division of the Federal Housing Administration (FHA). According to TPI, “prior to founding of [TPI], plate manufacturers had to work with the Federal Housing Administration (FHA) and the many various local code jurisdictions to have their products and designs recognized.”

That same year, J. Calvin Jureit, founder of Gang-Nail Systems Inc. (now MiTek USA, Inc.), created the Gang-Nail plate, the first metal connector plate for trusses that did not need additional nail fastening. From the beginning, Callahan, Jr. immersed himself in the work of these early pioneers and captured the vision of how the metal connector plate could change the light-frame construction industry.

“I place Ed in position as one of the pioneers of the metal plate industry,” said Charlie Hoover, Executive Vice President, ITW Building Components Group. “He is one of the individuals I think of when I recall the people that influenced my career.”

Until its formation, TPI states, “a plethora of truss design methodologies and testing procedures existed for plate connectors, nailed plywood or nail-glued plywood, bolts, split rings, and so on.” It was clear to men like Jureit, Sanford and Callahan that this promising new industry needed a collective voice. It needed an organization that could help establish national truss design standards and criteria that would allow truss fabricators across the country to gain acceptance by local building officials without the need for continual empirical testing. TPI was officially born in 1960, and with it TPI-60: Design Specification for Light Metal Plate Connected Timber Trusses, the standard we know today at ANSI/TPI 1.

Callahan, Jr. played an integral role in the early development of TPI. He was hired as the organization’s first full-time Managing Director in 1966. He also established the organization’s first headquarters in Washington, DC, in the early 1970s. During his early tenure, he was responsible for developing the third-party in-plant inspection and quality control program that continues to be a cornerstone of TPI today.

“In his early relationship with TPI, Ed worked hard to promote the product and the industry,” said Hoover. “At meetings, you could always depend on his depth of knowledge and his friendly, persuasive manner.”

By 1973, Callahan, Jr. had left TPI and settled in the Baltimore, MD area, where he opened his own structural engineering firm, Callahan Associates, Inc. In addition to working with many truss plate manufacturers across the country, he began working on the industry’s first “wood truss handbook.” This early work would eventually serve as his guide when he drafted the first edition of the Metal Plate Connected Wood Truss Handbook for publication by SBCA (then the Wood Truss Council of America) in 1993. This definitive manual on the truss industry is now in its third edition.

“This project was one of the WTCA Marketing Committee efforts when I first got re-engaged in the truss industry in 1989. The goal of the WTCA member group was to write a book that would provide a good foundation for broad-based university, design professional and building official educational purposes and document the history of the wood truss industry,” remembers Kirk Grundahl, Executive Director of SBCA. “Ms. Pam Sabean, Ed and I got together during the summer of 1992 and pulled together the final edition of the Wood Truss Handbook. Ed was great to work with given that this ended up being a much bigger effort than anyone could possibly have imagined going into it.”

“I remember Ed asked me to check a few of the standard truss configuration hand calculations he had done that were to go in the Wood Truss Handbook,” remembered Steve Cabler, P.E., Sr. Vice-President, Engineering and Technical Services, MiTek USA, Inc. “He was so meticulous, I remember matching almost every one of his numbers. If I thought he had made a mistake, I looked carefully because I knew it was more likely that I had done something wrong.”

Callahan, Jr. contributed to the wood truss industry in several different ways. In addition to his early work with TPI and later work with SBCA, he was an active member of the National Institute of Building Sciences (NIBS) consultative council. In addition, he provided his considerable expertise to the American Society for Testing Material (ASTM) in the development of several consensus-based standards still used in the industry today.

“I had the privilege of working with Ed on the Truss Plate Institute Technical Advisory Committee,” said Cabler. “Ed had such a wealth of experience and knowledge about the truss industry. His contributions on the code development side were always significant and well thought out.”

Callahan Associates, Inc. is the oldest firm specializing in wood structures in the mid-Atlantic States. “Over the years, he developed a reputation as someone who always did things the right way,” said Callahan, III. “It was so critical to him that everything was done by the book.”

This straight-forward, honest approach did not make him wealthy. At times, it may also have led to some frustration on the part of his clients and his employees. However, it was exactly that approach that made him one of the country’s preeminent forensic consultants for wood structures. “He got much of his forensic work through his reputation,” said Callahan, III. “His clients knew they could always trust him and that the work would be done right.”

“As a consulting engineer, Ed investigated and reported on many truss-related construction incidents for MiTek over the years,” said Cabler. “His work was always extremely professional, and in the case of a construction failure investigation, he knew how to identify the important elements and explain why things happened in a practical way that people could understand.”

Callahan, Jr. also led the way in providing a variety of testing services for the wood truss industry, from laboratory testing and on-site testing of existing building products, to structural component development of new building products. “My father, William Black, started TEE-LOK in the 1950s. Ed  helped us to develop what are still, to this day, the strongest truss plates the industry has ever seen,” said Black. “Ed even went with me to visit Tinius Olsen to select the proper testing equipment to ensure that we would get the most accurate results for our truss plate testing.”

Through years of testing, the data Ed collected contributed to the establishment of several standards for engineered wood trusses. “I think one advantage he had was that he grew up in the industry involved in those trade associations and standards groups,” said Callahan, III. “That involvement helped him develop a big-picture perspective on both the direction of the industry and effective ways to influence change.”

“Ed and I worked on several forensic investigation cases together, with Ed defending the plate supplier and me defending the component manufacturer;” said Grundahl, also a professional engineer and President of Qualtim, Inc. “It was always a comfort knowing that Ed was involved because you knew that common sense would be applied to the issue at hand and a focused and correct evaluation was his goal. This is refreshing as many forensic engineers today provide advocacy for the side they are representing rather than focus on the proper evaluation and correct answer.”

A Man of Principle

“He was a good father; he pushed us to do what made us happy,” said Callahan, III. “He also drove into us the power of positive thought. If you believed in it, you could accomplish it.”

His son is quick to point out that Callahan, Jr. was defined by his work, and he frequently brought his engineer-based approach home with him. Whether it was applied to the shelving unit in the garage, or lighter endeavors, his approach was one of doing it right or not doing it at all. “I think I won my Boy Scout troop’s pinewood derby race every single year,” remember Callahan, III. “He probably designed the first three-wheeled derby car by planning the wood till it balanced perfectly. Other parents complained it was unfair, but it definitely met all the requirements.”

Even when he “retired” to Florida, he found he couldn’t be happy if he wasn’t still involved in some consulting project or forensic work. Over his career, he authored countless articles on structural engineering and wood truss performance, and even as he approached 80 (an age he missed attaining by exactly one day), he was still working to finish two books.

“Ed was an intelligent, dedicated and practical engineer, never hesitant to share his expertise with others,” said Cabler. “He was a true professional in every sense of the word. He will be missed, but his legacy and contribution to our industry live on.”

“He was always a gentleman and we will miss his counsel,” echoed Hoover.

“Ed’s devotion to the industry was second to none, and we in the truss plate industry are forever in his debt,” added Black. “Thank you, Ed, you will be greatly missed as a colleague and a friend.”

He certainly was a man who made his mark—in the industry, and in the lives of his wife, three children, eight grandchildren and four great-grandchildren. 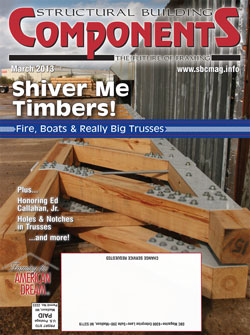