Components play an integral role in the structural integrity of a building, but in this case, they’re used purely for aesthetics. For the remodel of a Summit Credit Union’s “Inspiration Branch,” removable façades were built inside the lobby to represent financial and life goals dealing with travel, education and home ownership. This two-story façade shows part of a home, including a first-floor breakfast nook and a second-story child’s bedroom with a roof that is framed with trusses. Much like a theatre set used in a play, the façade, including the trusses, can be moved without affecting the structure of the building.

The decision to use trusses in the dream house was intentional, says Peter Tan, of Strang, Inc., design architect on the project. “A cut-away view was the most effective way to simultaneously depict the breakfast nook and bedroom, as well as the interior and exterior of the house. Trusses are one of those easily recognizable iconic elements of a roof structure that, when exposed, effectively convey the idea that this is a cut-away view,” Tan noted. “Someone imagining their dream house would expect to see a roof that is built of high-quality trusses that have been tested to perform to a predictable standard.” SBC 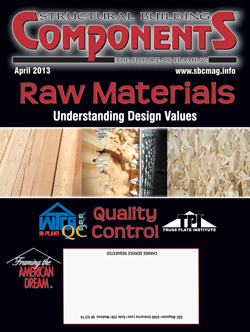 Quality Control Your Destiny
Design Values Matter: Make Sure You Fully Understand Why