I had an interesting conversation recently with an engineer that I have known for at least 15 years. At the June 7, 2013 ICC-ES hearings, there was a debate regarding the approach to the development of seismic design coefficients in the context of an ICC-ES Acceptance Criteria (AC) entitled “AC440—Proposed New Acceptance Criteria for Using an Equivalency Approach to Verify Seismic Design Parameters for Lateral-Force-Resisting Vertical Wood Truss Wall Assemblies.” AC440 had just  been approved, which was a fantastic outcome for all metal plate connector manufacturers, truss software providers and structural building component manufacturers (in case you aren’t familiar with the ICC-ES and AC process, see this sidebar).

During this subsequent conversation, a structural engineer from a prominent company that sells a competing product to AC440 trusses said to me forthrightly and directly, “Kirk, the problem with you is that you don’t know what you don’t know!”

One week later, on June 14, I received an email from another engineered wood engineer that I have also known since the mid-1980s who, in response to my Exec’s Message in SBC Magazine, wrote:

I just read the Exec’s Message by Kirk Grundahl in the June/July 2013 issue of Structural Building Components. I have to say that I am appalled that Kirk measures dramatic failures by the number of people that witness them rather than by the fact that people are killed. He appears to be content risking people’s lives for the sake of innovation since very few people would witness a failure compared to those that witnessed the Space Shuttle Challenger disaster.
I’ve disagreed with much of what he has said lately in regards to fire membrane protection and said nothing, but I couldn’t let this go without commenting. He’s over the edge.

On the flip side, on June 24 I received an email from a building design engineer in California who has worked in the truss/building design industry for over 30 years. He wrote:

I found your recent [June/July issue] Exec’s Message, “ingenuity blessing” to be profound and insightful. Unfortunately, I think you may be “preaching to the choir” because I doubt that your magazine is read by the SEAOC board or their seismology committee. I think they all deserve a complimentary copy.

All three of these men are great engineers who I know well on a professional basis. Obviously, I struck a chord with each of them. In my view, all these perspectives are helpful, as it means that thoughts are being challenged so forthright debate and growth can take place. I must admit it feels as though I have been doing a lot of this lately, even when it is not my intent. It may stem from the fact I am a strong advocate of change, innovation and making positive growth and evolution occur swiftly. I realize I do not have that much time left on this earth. That sense of mortality prompts me to believe if we are going to get change-oriented work accomplished, it needs to be happen tomorrow, not 10 years from now.

Indeed, these engineers provided profound and positive statements. I believe they should serve as a key theme for some future articles in SBC. A few examples will be: defining what we do not know, how over–the-edge raw material design values are, and how SBCRI public-domain-oriented testing and subsequent engineering analysis have significantly changed what we now know.

The dark edges of this knowledge need to be exposed to the light of day, because when the best economic solution is an IRC (prescriptive) solution versus an IBC (engineered) solution, there is something fundamentally wrong. Engineering analysis should always provide a more efficient solution or we have seriously devalued engineering. I believe a big thank you needs to go out to these engineers for fostering an article series aimed at illumination.

One of the things we did not know previously is that some of the lumber we were using, and the way that lumber design values are derived, caused us to design structures with 30 percent more resistance than the lumber actually had. While this is true from the perspective of ASTM design values, in some cases, this strength reduction was very real in the field as well. The process of reducing Southern Pine (SP) lumber design values, which became well known to most in the construction industry in July of 2012, also became known to SBCRI just as we undertook a set of forensic tests. Through these tests, we evaluated an assembly’s ability to resist deformations to prove the trusses were not any part of the problem for the buildings in question. That testing took place in late 2009 and early 2010. (See truss assembly tests photos 1-3 below.)

Photo 1. Testing took place in late 2009 and early 2010 to evaluate an assembly’s ability to resist deformations.

Photo 2. What we didn’t know at the time we started our testing of the pictured assemblies to failure was that it would lead us to discover a broken 2x4 SP #1 tension web member.

Photo 3. The truss at the bottom right of this assembly test was the truss that first broke at approximately 1.6 times total load. The SP #1 2x4 web member was in the first panel with the top of the web at the top of the vertical over the bearing point. Thus this web member had a very high tension force applied to it and thus broke in tension.

What we didn’t know at the time we started our testing of the pictured assemblies to failure was that it would lead us to discover a broken 2x4 SP #1 tension web member. The lumber failure was attributable to the board containing the pith center of a SP tree. (See photos 4 and 5.)

Photo 4 (left). SP #1 2x4 before assembly testing. Photo 5 (right). SP #1 2x4 after assembly was tested to failure, showing  the pith center of a SP tree. The result of our testing of this stick of lumber after the structure failure  was that its Modulus of Elasticity (MOE) value was approximately 400,000 psi, when it should have been 1,800,000 psi.

The result of our testing of this stick of lumber was that its Modulus of Elasticity (MOE) value was approximately 400,000 psi, when it should have been 1,800,000 psi. Normally, this would have been viewed as a “one-off” occurrence. However, the truss-assembly-tested lumber failure performance similarly occurred over the next four tests (repair, test, repair, etc.) we made of this assembly.

Interestingly, the fifth assembly test had the assembly break at 2.2 times design total load with only four trusses in a five truss set still functional near the end of the test. The last outcome gave us assurance that a truss assembly can typically overcome lower lumber design values that may not be as advertised through the grade stamp on the stick of lumber.

For comparison, the Southern Pine Inspection Bureau (SPIB), the entity charged with monitoring and establishing design values for SP, also undertook testing of 2x4 SP #2 and published the data found in the SPIB SP#2 histogram. (See figure at right.)

Shown side-by-side, these two histograms are remarkably alike, and resulted in a similar assessment of a 30 percent reduction in bending strength of 2x4 SP #2. This eventually led to a complete reassessment of the SP resource, and a refinement of all Southern Pine design values for all grades and sizes.

What We Did Not Know Then That We Do Know Now

In my opinion, the fascinating aspect of the testing results, when one digs into the historical literature, is that our findings were actually likely given what was known about juvenile wood performance back in 1984 by the lumber industry. Documentation was submitted to the American Lumber Standards Committee (ALSC) and made publically available over the course of the lumber design value evaluation process occurring in 2011 and 2012. (See pdfs below to view this documentation. Further, a listing of all background information on this topic can be found here.)

Now clearly, SBCRI did not know this history heading into its testing process, but the test results were predicted by lumber industry experts more than 20 year earlier. This outcome clearly shows the value of SBCA’s industry testing facility and the power of greater knowledge. When undertaking engineering and engineered design, accurate design values are important. To have anything else seriously devalues engineering, and as a result, all industries that rely upon accurate raw material design values to add value to their products in the marketplace.

It is very difficult for component manufacturers to compete effectively when the best economic solution is an IRC-based prescriptive stick-framing solution. This is especially true when special-interest-based advocacy tries to assert that enforcement of the 30 percent reduction in SP lumber strength is up to a local building official, which may not happen until 2020 or later. This makes the componentized roof, wall and floor solution (which must be engineered using the SP design values effective June 1, 2013) much less competitive because the prescriptive solution has a 30 percent design value advantage if it isn’t enforced uniformly. The market, and those who have been advocating this approach, are seriously devaluing engineering. It seems to me this is a sign of something fundamentally wrong.

Editor's Note: The online version of this article was updated June 9, 2014 to provide updated and additional hyperlinks to information germane to this topic. 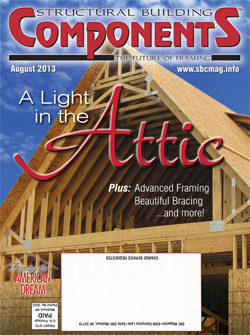