More frequently, blocking is required for installation of high heel trusses, when no such requirement existed in the past. What is going on, and has any work been done to define and improve this concept?

The 2009 International Residential Code (IRC) introduced blocking requirements to transfer the lateral load resulting from wind and seismic events into braced wall lines. The 2012 IRC further clarified these requirements to provide more guidance. As more and more municipalities adopt the 2009 and 2012 language, this will likely become an even more common issue where help with implementation is needed. Couple the IRC requirements with energy code requirements that are pushing more buildings to utilize a higher heel, and it is apparent the connection of high heels to walls is a key application issue.

2012 IRC Table R602.10.8.2 outlines the requirements for when blocking is required, and is a function of the seismic design category, the design wind speed, and the height of the heel (see Figure 1).

Heel height blocking requirements are becoming a common enough issue that the SBC Industry Testing Task Group and the TPI TAC/SBCA E&T Testing Review and Vetting Group has begun to evaluate the needs and priority of testing the performance of assemblies to quantify the effect of heel blocking. Most people within the industry believe the new requirements are excessive and would like to understand the true impact of blocking. The codes and the more traditional engineers always try to simplify problems like this, which generally leads to very conservative results because the simplifying assumptions have to be so general in nature. Testing always helps with understanding of how the load paths operate and makes more precise resistance easier to implement. Some of the key issues that need to be addressed include:

1. How do the trusses, when attached to a diaphragm and properly braced, rotate to produce a lateral load?

2. Is the truss roof or floor diaphragm really a flexible diaphragm?

3. Is the truss roof or floor diaphragm more rigid than we think, and how does that semi-rigidity affect the load transfer of the diaphragm onto the plate of the wall system below?

4. Is the roof diaphragm more rigid than the wall, and if so, when does the wall fail?

5. Is this really a shear wall design problem and not a roof diaphragm issue?

6. What about the code-compliant connections of the truss to wall interface?

7. How do the connection systems perform?

While there is still much to consider with regard to a testing plan and a timeline for carrying out such testing, it has potential to provide valuable information to the industry with respect to ensuring the code requirements more accurately, yet still reliably, represent the actual load paths that exist.

In the meantime, some testing has already been completed by the USDA Forest Service, which has shown the IRC prescriptive requirements to be conservative in certain applications. The study and general technical report (FPL-GTR-214) examined the performance of nine different five-truss assemblies, as summarized in Table 1. Load was applied to the system at the center vertical web of the truss assembly in a manner to create the highest eccentricity at the heels. The intent was to have results applicable to as many different scenarios as possible. The ultimate load performance for each configuration, as well as its performance relative to configuration “A,” is provided in Table 2.

As can be seen in Table 2, there is an effect caused by the high heel, which does in fact reduce capacity. Concerns over the decrease in capacity, however, should be mitigated by the fact that, as stated in the FPL report, “Analysis presented in Table 6 shows that all tested specimens, including the benchmark specimens without eave blocking, exhibited significant strength capacity over design wind loads in both 90- and 110-mi/h wind zones, with factors of safety ranging from 3.1 for the unblocked high-heel specimen up to 6.0 for the OSB-braced specimen with a reinforced ceiling diaphragm.”

The results of this study indicate that use of OSB sheathing on heel heights up to 15-¼" should provide adequate resistance for the vast majority of seismic categories and wind speed without the requirement of additional blocking.

It is clear from the very specific and isolated heel height testing performed that there is an opportunity to provide revisions that take advantage of this knowledge. SBCA staff will explore whether this is possible, given this test information. In addition, SBCA staff will make recommendations on how to integrate the testing with current engineering mechanics, based on generally accepted engineering practice, where we can define a few details that provide more efficient load transfer solutions when trusses are used. Beyond this, the key issues defined in this article provide fertile ground for test-based improvements in load path understanding and even more accurate load transfer details.

To pose a question for this column, email technicalqa@sbcmag.info.
1 www.fpl.fs.fed.us/documnts/fplgtr/fpl_gtr214.pdf 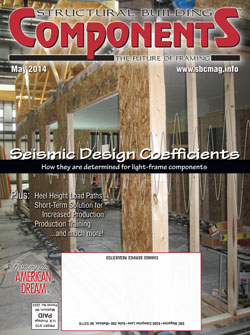