How does a business go from stick building in the 1960s to a growing component manufacturing operation today?

Simple. Establish a solid reputation and embrace customers’ visions for their projects. “We take great pride in what we do,” said Richard Hills, Senior Sales Associate at Windsor Building Systems.

Amwood Homes, based out of Janesville, WI, started out as a stick builder in 1959 and transitioned into component construction in 1972. In 2004, Amwood purchased Windsor and, aside from changing the name slightly, maintained much of Windsor’s business identity. “When we bought Windsor, they had a good name and reputation. We didn’t want to lose the client base,” said Virgil Waugh, President of Amwood.

A good example of Wind-sor’s focus on meeting client needs is a custom home project located in Madison, WI. Windsor worked with homeowner Pat McCaughey, who also served as the builder/general contractor, on the concept for the house. With the assistance of a local architect from Architecture Network, Windsor helped make McCaughey’s vision a reality.

“This was not a typical project in the least—very much a Frank Lloyd Wright influenced design with many angled walls and a four-story open stairwell,” said Hills. “This was the most interesting house I was involved with over my 30-plus years [career]. It was a fun challenge.” (See Figure 1 below.)

When the owner bought the property, an older home sat on the 3,000 sq. ft. lot. The structure was torn down, and the new house was constructed according to a zoning change, which allowed for a larger house to be built than was previously permissible. While the new home is larger than was possible under the old zoning rules, the new house has a smaller footprint than the previous home.

The owner’s unique vision for the house gave Windsor the opportunity to get inventive with its design. “We incorporated steel framing to integrate with our wood components. We had a 40-ft.-tall, almost-solid LVL wall that created the 4-story stairwell wall,” said Hills.

Windsor’s teams partnered with the customer and followed the project from design and production to installation. “Our design team really took an opportunity to shine on this complex project. The shop followed through putting everything together. It was amazing how well it fit on the foundation,” said Hills.

The team at Windsor also shone on an approximately 20,000 sq. ft., 20-unit apartment complex in Milwaukee, WI (see Figure 2). One of the goals for the project was to build “the greenest building possible,” said Hills. That ambitious goal paid off, and the complex received a LEED Platinum Certified Building rating with the U.S. Green Building Council—the first multi-family project in Wisconsin to achieve such a rating.

Many building products, from the windows to the OSB, came from within the state. As it turned out, even the maple flooring was recycled from the high school that Hills attended. “I walked through the building and thought, ‘This looks really familiar,’” he joked.

Along with its emphasis on green building, the project presented some demanding jobsite conditions. “We built this in the middle of the winter, and it was a very cold winter,” said Hills. Workers also had very limited leeway on the jobsite, with only 4 to 6 ft. between the apartment complex and existing buildings on either side.

“The biggest constraint we faced was there was no room to park trailers,” explained Waugh. The especially tight space in the middle of a busy city contrasted with many of Windsor’s other jobs, which are located in new subdivisions with plenty of room to spare. For the Milwaukee jobsite, Windsor needed to get creative and make the most of any available space. “We ended up finding a parking lot close by to stage trailers. When they emptied one, we were gone five minutes and filled another trailer.” (See Figure 3 below.)

Waugh says how the company managed to address these jobsite conditions just goes to show the benefits of component construction. “That’s the beauty of components,” he said. “You can build in any season.” 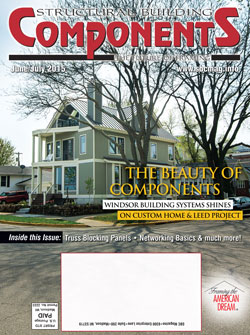