NFC’s next set of safety guidance
will take fall protection one step further.

The National Framers Council (NFC) is working to establish itself as a leader in jobsite safety with its FrameSAFE™ program, and its upcoming Site-Specific Safety Plan: Fall Protection program will soon further its reach in the building community.

With the creation of FrameSAFE in 2014, NFC addressed the obstacles of staying safe on the jobsite. The next addition to NFC’s library, Site-Specific Safety Plan: Fall Protection, focuses on best practices when conventional fall protection methods are either impossible or present a greater hazard to workers.

“The FrameSAFE manual comes straight out of OSHA standards, and is a baseline manual for providing a safe working environment for your employees on the jobsite. However, there are situations where some of those directions may be either impossible to implement or risk greater harm to workers on the jobsite. In those cases, we need to create a site-specific plan to do those tasks,” said Kenny Shifflett, member of the NFC Steering Committee and owner of Ace Carpentry in Manassas, VA.

For example, in 2011 the Structural Building Components Association (SBCA) released its “Step-By-Step Process for Fall Protection & Trusses” using Building Component Safety Information (BCSI) installation guidelines (sbcindustry.com/fallprotection) and includes alternative fall protection methods that comply with OSHA standards. In it, SBCA laid out a process on how to set an initial group of metal plate connected wood trusses, limiting the risk to workers on the site by having them set, brace and sheath the first few trusses individually without the need for protection of handrails, netting or harnesses.

The NFC’s site-specific program will take fall protection one step further with solutions for setting floor joists and laying sub-flooring; setting and bracing roof trusses and rafters; and numerous other framing installation topics.

“For every application, the end result is still the same; you have to protect the worker. But the means and methods of how you do it can be different on each jobsite in different parts of the country,” said Shifflett.

George Hull, a fellow member of the NFC Steering Committee and owner of Hull Associates, LLC in Grand Prarie, TX, says the site-specific safety plan ensures that OSHA regulations are followed, while recognizing that much has changed in the framing industry and having a specific response to each jobsite is the best approach.

“We’re trying to work within the culture of the framing industry, and what we’ve been taught in the last 35 years,” he said. “There are certain characteristics of buildings that don’t allow you to have a tie-off point. When there’s no effective way to tie off in those locations, we have to use a job-specific best practices approach.”

Shifflett says FrameSAFE and the Site-Specific Safety Plan were born from the need to deliver a standard for safety to general contractors and builders. Once more and more builders train employees and subcontractors on the best practices, the industry will begin to see a widely accepted best practice standard.

“A lot of our lower tier members alternate between different framing companies,” Shifflett said. “They may use their own safety practices. With the FrameSAFE program, the more and more people use it, you start seeing the consistency in the market for our workers practicing safety and training the same way. This makes ‘training in’ best practices easier and more consistent.”

General contractors and framing crews often have their own safety manuals outlining broad safety measures for the jobsite. Those manuals may differ from FrameSAFE and the Site-Specific Safety Plan, though, and a difference of opinions on the site could lead to a game of whose standards are better.

Hull says the goal of FrameSAFE is to prevent that situation by creating one more standardized set of best practices for the industry nationwide that are based on current framers’ practices.

The long-term goal of setting these guidelines is to host an online database that general contractors and framing teams can visit and know who in their industry participates, trains and follows the same safety guidelines.

“When a general contractor hires an NFC framer member, they’ll know when they come on the job that they have experience in our best practice guidelines and will follow a set level for safety that they’ll adhere to,” Shifflett said.

For those in the framing industry who may be on the fence regarding joining NFC and following the committee’s developed best practice approach, Hull says he understands their concern and realizes safety wasn’t talked about as much years ago as it is now. But as a contractor himself, he has learned the value of safety.

“As a framing contractor, you’re responsible for so many things. Water intrusion, the structure of the building, there are so many litigious things associated with being a contractor, and fall safety is one of them,” he said. “There are a lot of contractors who say, ‘I can’t afford to be crazy about safety.’ I’ve learned being attentive to safety pays. Do my employees seem happier and more content where there are safety guidelines? Yes. You’re not going to get a check, but you’re going to get better employees and better employee satisfaction.”

The most important aspect of creating best practices is maintaining and evolving these guidelines. Hull insists that NFC won’t ignore input from workers on the job who are doing things differently or more efficiently years from now. “Should we revisit these often?” he asked. “Yes. The council has to keep its finger on the pulse of the industry.” 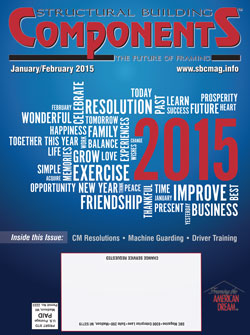 Suppliers Are the Key to Our Success: Get Them Involved!
Parting Shots
Focusing on Fall Protection Best Practices